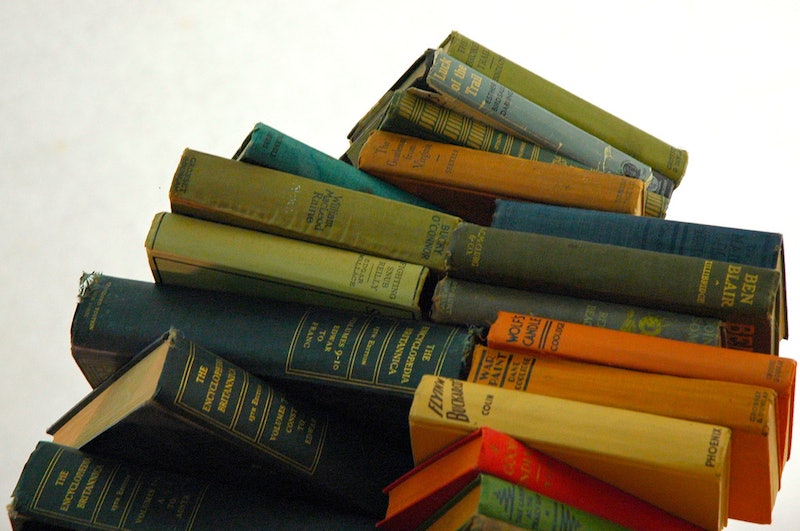 Have you ever reread one of your childhood favorites as an adult, only to realize that something was completely different from the way you'd remembered it? Maybe you catch a joke you didn't understand before, or you figure out that a favorite character was really in the closet the whole time. Or maybe, just maybe, you find something that makes your blood run cold and turns your stomach upside-down and sideways.

Book nerds know that you never catch everything in a book on your first read-through. Even after reading a short poem, you're bound to have some new sense of understanding hit you the next time you're in the middle of a shampoo. On occasion, however, what you miss is the intimation of something sinister.

I'm a very analytical person, so it makes very little sense that this kind of thing happens to me all the time. I can generally spot an unreliable narrator, or the bitter irony a character can't seem to comprehend. But when it comes to implied events, I'm pretty dense. I don't know why, but I have a tendency to take certain things at face-value.

If you're like me, some of the revelations here may shock you. Then again, you might have spotted all these already, and wonder why it took me so long to catch up. Either way, here's a look at 15 popular books you might never have realized were super-creepy.

Thanks to Jean Rhys' Wide Sargasso Sea, there are two ways of reading the Jane-Rochester-Bertha love triangle in Jane Eyre. If you take Rhys' prequel as a valid explanation, then Bertha — born Antoinette Cosway and renamed by Rochester — was driven mad from her isolation in the attic and her husband's infidelity. Which, I think we can all agree, is pretty terrible.

But even if you believe Rochester's explanation of events to Jane — that Bertha was unfaithful and mentally unstable — you don't get a creep-free ending. What could possibly make a 19th century woman go mad after sleeping with men? Syphilis. That's right: an STD turned Bertha's brain to Swiss cheese, which means that Rochester and Jane, who is pregnant at the end of Brontë's novel, are likely infected with it as well.

The Bad Beginning by Lemony Snicket

Everyone knows Count Olaf wants to marry Violet Baudelaire to steal her family's fortune, but does he have other plans for his cousin, as well? Quite possibly, yes. Olaf frequently refers to 14-year-old Violet as "cute," a word which here means attractive, and he makes it clear to his minions that they are not to violate her while she is in their care; that's his delight and his alone.

You remember poor Mayella Ewell, right? She has a dead mother she can't remember, a father who abuses her, a whole passel of younger siblings to care for, and no one who will help her except the man she condemns to death. Except, wait... if Mrs. Ewell died before Mayella was old enough to remember, then where did all the young Ewells come from?

Harry Potter and the Order of the Phoenix by J.K. Rowling

Dolores Umbridge is probably the only universally-hated Harry Potter character. So when she gets dragged off by the Centaurs and returns catatonic, triggered to alertness only by the sound of hoofbeats, no one really cares, right?

Look, I hate Umbridge as much as the next person, but no one deserves to be raped. And that's what happened to the evil headmistress in the hands of the Centaurs. J.K. Rowling conceals many of the darker aspects of her novels, but she adheres pretty closely to the traditional mythology surrounding the magical races in her wizarding world. I'll give you one guess what Centaurs were known for doing to the women they kidnapped.

Night of the Living Dummy by R.L. Stine

OK, so we all know the Goosebumps books were creepy when we were kids, but surely they're less scary now. I mean, take Night of the Living Dummy. The antagonist is just a talking ventriloquist dummy who's infused with the spirit of an evil old toymaker. All he wants is to turn pre-teen girls into his slaves — and maybe a wife — and slap them around with "love taps" when they don't behave. Not. Creepy. At all.

Freaky Friday is the classic switcheroo story that somehow gets a film reboot for every generation. The movies have seldom, if ever, used the same explanation the book gives for the body-swap, that Ellen Andrews is basically a witch.

But that isn't the creepy part. The scariest part of Mary Rodger's 1972 YA novel is that Boris — the cute, perpetually congested neighbor and subject of the protagonist's crush — lets Annabel's brother, Ape Face, leave with a strange, attractive young woman who comes to collect him. Everything turns out OK, of course, because the stranger was, in fact, Ellen in Annabel's made-over body. That doesn't negate the fear of knowing what could have happened, however.

Game of Thrones is problematic in both its book and television versions, but nothing is as unsettling as Daenerys and Khal Drogo's wedding night. The HBO series depicts the night's events as a pretty forceful rape; it's obvious Daenerys doesn't want to consummate her marriage, and equally apparent that Drogo simply doesn't care. In the book, however, the 13-year-old Daenerys is depicted as being able to consent to sexual intercourse with her 30-year-old husband. Ick.

The Claiming of Sleeping Beauty by Anne Rice

You know the story: a prince lifts a 100-year curse by waking a sleeping princess with a kiss. Not in Anne Rice's version, though. The Claiming of Sleeping Beauty opens with the adult prince raping the 15-year-old Beauty to wake her up. In keeping with the region's tradition, Beauty is stripped naked and sent to live as a sex slave in the prince's kingdom until she is properly trained. Even more ick.

The Pied Piper of Hamelin

You remember this story, too, yeah? The Pied Piper was hired to charm all the rats out of Hamelin, but, once he completed the job, the town's residents refused to pay him. In retaliation, the Piper entices Hamelin's children to follow him, and they are never seen again.

So what happened to the kids? Well, if you follow the parallels to the Piper's treatment of the rats, logic will tell you his music commanded them to hop into the river and drown. Other versions of the story have the Piper taking the children to a local region, where he molests and kills them. Either way, it's enough to make you think twice about making this your kid's next bedtime story.

Harry Potter and the Deathly Hallows by J.K. Rowling

Going back to what I said about Rowling concealing some of the more sordid details in the Harry Potter narratives, let's take a look at Fenrir Greyback in Harry Potter and the Deathly Hallows. He's the werewolf who has a noted preference for attacking children. He turned Lupin, attacked Bill Weasley, got his clutches on the trio of protagonists, and very nearly attacked Lavender Brown, so we all already know he's an evil jerkass. The book hints many times that Greyback might have plans for his victims beyond biting, however.

Charlotte Perkins Gilman's short story, "The Yellow Wallpaper," is pretty creepy already. A woman suffering from mental fatigue is isolated in the attic of a rented home and prescribed strict bed rest by her physician husband. Understandably, she goes mad in the process.

It's pretty clear that things are not as the narrator describes them, even in the beginning of the tale. In the couple's temporary country "house," the beds are bolted to the floors, the windows are covered in bars, and there are metal rings hooked into the walls.

It isn't a house at all, but an asylum.

Twilight raises a lot of creepy questions. Like, why does a 104-year-old man have any romantic interest in a 17-year-old girl? And why is he stalking her? Did he really just tamper with her vehicle so that she couldn't leave? Forget vampire novel. Twilight is a horror story.

Stay out of the Basement by R.L. Stine

Stay out of the Basement concludes with the classic identical twin debacle: Dr. Brewer has made a plant-based clone of himself, and it's up to his children to determine which of their fathers is the real one. Cutting one father and noticing that he bleeds red, Dr. Brewer's daughter, Margaret, kills the other father, who is begging for his life. Later, while Dr. Brewer is burning his botanical experiments, one of the plants nudges Margaret, insisting that it is the real Dr. Brewer.

It's possible that the children didn't choose the right Dr. Brewer when they executed his supposed clone, but it's just as likely that the plant at the end of the novel is being deceptive. So, who's lying?

Would you believe me if I said that no one is? Dr. Brewer used his own DNA to create a plant-based clone of himself, ostensibly one with his own memories. If that's the case, then each of the Dr. Brewers truly believes himself to be the real Dr. Brewer, and is a sentient copy of the original botanist.

In Mansfield Park, Fanny Price becomes the target of Henry Crawford, a right cad. He pursues her — and other women — incessantly, despite her disinterest in him. Fanny's family, however, thinks the match is a good one, and so they do not discourage Henry from attempting to woo her. When Fanny turns down his proposal, she is sent away to reconsider her decision: the Regency equivalent of having to stand in the corner and think about what she's done.

Thankfully, Fanny's family sees the light by the end of the novel, when Henry gets another paramour pregnant and refuses to marry her. The horror here is that Fanny could have, very easily, been worn down by Henry's advances and her family's insistence, and wound up marrying her harasser.

Claudia and the Phantom Phone Calls by Ann M. Martin

Speaking of marrying her harasser, that's kind of what happens to Baby-sitters Club member Claudia in this series installment. In Claudia and the Phantom Phone Calls, the titular baby-sitter keeps getting strange phone calls and spotting a prowler when she's alone with her wards at night. She's understandably terrified, but, as it turns out, the caller/prowler is just a classmate with a mutual crush on Claudia, and has been trying to work up the urge to ask her out. She agrees to go to the Halloween dance with him, and everything turns out OK, right?

Not so fast. How creepy is it to equate stalker behavior with affection? This isn't a lesson you want to pass on to the next generation, and it'll probably make you feel a bit icky to think you ever romanticized it.

More like this
Rupert Grint Just Shared A *Major* Update About Ron Weasley’s Future
By El Hunt
'Mayfair Witches' Already Changed 2 Major Characters From The Books
By Grace Wehniainen
Your Guide To Watching 'Everything Everywhere All At Once' In The UK
By El Hunt and Sophie McEvoy
45 Comfy, Cheap Outfits From Amazon That Look Actually Expensive
By Claire Epting
Get Even More From Bustle — Sign Up For The Newsletter
From hair trends to relationship advice, our daily newsletter has everything you need to sound like a person who’s on TikTok, even if you aren’t.