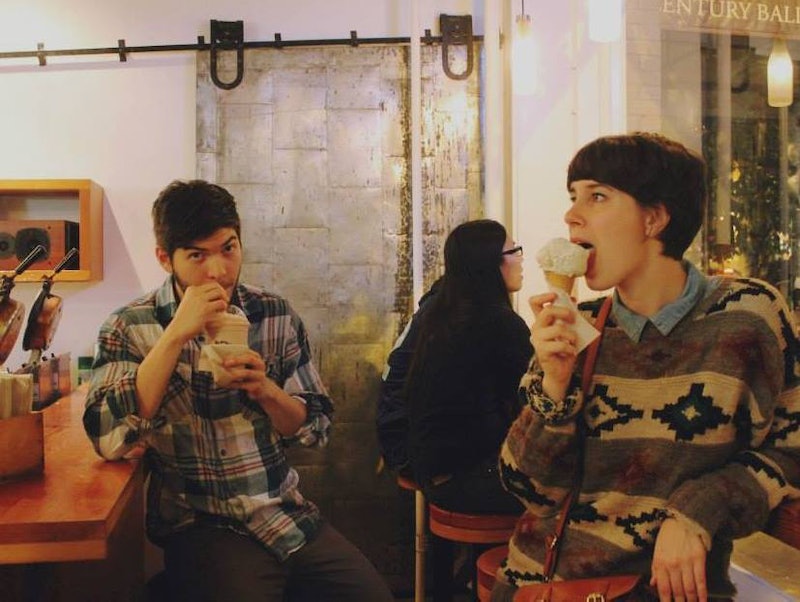 As life often proves to us time and time again, there's a lesson tucked away in tough times. That's precisely why getting a bad haircut can teach you about being happy. For much of my life, I never really understood the turmoil my friends or relatives experienced when they'd been victims of bad haircuts themselves. I don't mean that in a bragging way, though. I mean it in a more curious, "Seriously, though, why are you wailing right now?" kind of way. Yet in the aftermath of a bad cut, I've seen everything from eyeliner running down loved ones' cheeks to a roommate singing Gloria Gaynor’s “I Will Survive” while crumpled on the floor.

These are all valid feelings, of course, but ones I've never really shared. I'm not really sure why I didn't get the freak-out gene when it comes to my locks. Maybe it's because my mom always had questionable, Polish haircuts when I was growing up as a kid, and I always thought her beautiful. Or maybe it's because I've pretty much had the same 'do since I was two (The Tina Belcher) and have grown used to seeing the same face in the same mirror.

To say that the reason I never drank wine straight out of the bottle while sitting in my dark kitchen after a bad haircut is because I never took risks with my locks would be untrue, though. When I was in Vietnam several moons ago, for instance, I asked a cross-eyed barber to buzz the back of my hair to help me out in the 200 percent humidity department. He didn't speak English, so I had to sign my way into what I wanted, making "bzzz" noises while coming at him with my fist (aka my pretend clipper). When he led me to his barber chair in a shoe box storefront with one wall missing, I didn't bat an eye. I mean, what could go wrong?

In the back of my mind, I thought that if worse came to worst, I could always keep it in a ponytail until it grew out. But what I've found out since is that sometimes the solutions we come up with don't matter. What matters is our perspective of ourselves. If you don't like yourself much to begin with, the smallest change to your appearance will likely trigger a mourning period of baffling proportions.

This is something I learned firsthand when I got my hair butchered into a pixie cut last year. My story is unique in the way that my Bridget Jones–esque pity party (drinking vodka out of the bottle while singing "All By Myself" on the couch) didn't come until a month after the massacre happened. I chopped my pretty, Parisian-like, messy brown hair into a Lego people helmet haircut, and as I was walking back home to my apartment after tipping the hairdresser a too-kind amount for his transgressions, I kept having to bite back a laugh every time I caught my reflection in a store window. I looked ridiculous. I looked like Fantine ready to sing about how she once had a dream.

And when I came home? Well, my boyfriend took a solid minute to double over and laugh the most rolling laugh you can imagine, before, wiping his eyes, suggesting we go get tacos for dinner, like nothing was really different. Because it wasn't.

That is, until everything was. Enter a month later when we broke up and I was back to being single and awkward at a sports bar, trying to politely nudge between two bros to order a beer. I felt awful. Every other moment I'd bring my hand to my short cap of hair and try to smooth down the mushroom-like poof it kept trying to spring into. I kept my eyes pinned to the bar as I waited for my draft to make its way to me, not daring to try and catch someone's eye because, ew, who would be looking at me right now anyway?

This was coming from me, the girl who once accidentally cut her bangs up to her hairline like a gum accident gone wrong, and still managed to peacock around like she was one hot tamale. It was strange, and more than a little heartbreaking.

That night when I came back home and slumped off to bed, I thought about what was happening to me. Since when did I join the brigade of humans who worried about their hair? Pushing off of the bed, I went to stand in front of the mirror and look at my reflection. The face was the same: The same brown eyes, the same lips slicked up with red like I just finished eating a bowl of strawberries, the same round cheeks, and the same nose that belonged to my grandmother. The only thing that was different was my attitude.

I didn't belong to anyone anymore, and with it came a new dependence: A dependence to turn to myself for validation. I couldn't rely on someone else liking me anymore. I had to like myself.

With that realization, it was like my eyes readjusted. Yes, the haircut was questionable. But what was happening on top of my head didn't define me as a person. It didn't hint at the stories I could tell you. It didn't give you an inkling of how hard I could make you laugh or how big my heart was. It had nothing to do with me.

So the next time you're contemplating mourning your lost locks, pause to think about why you feel like it's such a game changer. Maybe it has nothing to do with the shoddy layers or the chin-length bob. Maybe it has everything to do with you not realizing you're a person who has more to contribute than a curtain of hair.

A good blowout might make you feel pretty like a good dress makes you feel like twirling, but the ways that you're kind — the way that you buy your friend a cup of coffee, the way you call your mom even when you really don't want to — are what make you truly beautiful.