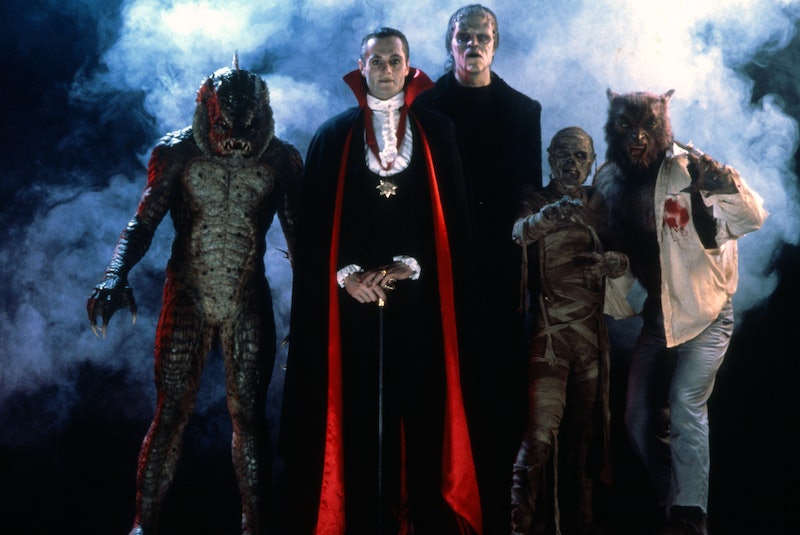 It's October, and you know what that means. Well, yes, pumpkin spice lattes, but that's not all. It's Halloween! Halloween is the time of year when everyone dresses up in ridiculous costumes, goes to a party with tons of alcohol, and eats way too much candy. But in addition to all of the bobbing for apples and eating all the candy corn you can find, there's also another aspect of the holiday: all that movie watching. There's no better way to enjoy the season than by scaring yourself silly. And what's the best way to do that? By staying home and browsing Netflix. If you're freaking out that there's too much content, making your Oct. 31 movie choice impossible, don't — I've already sought out the 16 best Halloween movies on Netflix, so all you have to do is watch.

Now, even if you consider yourself to be a rational person and don't buy into the ancient mythos surrounding Halloween, there's no denying that it's the spookiest time of the year and that any good holiday-themed movie will surely give you goosebumps. After all, Halloween is the night of the year when the veil between our world and the world of the undead is at its thinnest, increasing the chances of a ghostly encounter. So grab your Kit-Kats and a pumpkin beer, because it's about to get spooky with these great Halloween-themed flicks.

You might as well start with a classic, and this is one of the best horror films ever made. It stars Mia Farrow as a young woman who has just moved into a new apartment and who becomes pregnant after a vivid dream where she is raped by a demon (her husband tells her he actually had sex with her while she was asleep, which is still awful). During her pregnancy, she begins to suspect that her baby is the spawn of the devil, brought about by her bizarre old neighbors who may have made a pact with her husband. Seriously disturbing stuff.

Might as well keep the demonic child theme going with another classic. Damien is a five-year-old who causes terrible things to happen wherever he goes, leading people to believe that he might just be the Antichrist. You know, that old chestnut.

Another classic, this film is about a portal to a Hell-like dimension populated by terrifying demonic creatures known as Cenobites. Netflix also has a number of the film's sequels, but the original is in a class by itself when it comes to sheer terror.

The horror movie of the '90s, Wes Craven's Scream managed to be scary while also acting as a send up to the genre and redefining what a slasher film could be. Scream 2 and 3 are also on Netflix, in case you feel like screaming a couple more times.

The late Wes Craven really liked getting meta in the '90s, and this entry in the Nightmare on Elm Street series is the best example of that. It's about the stars and creators of the Nightmare movies, playing themselves, who are then tormented by Freddy Krueger in real life. It's more of a psychological thriller than the other films in the series, so if you prefer a more traditional Freddy experience, Netflix is also streaming Nightmare on Elm Street 2: Freddy's Revenge.

Considered one of the best horror movies in recent years, this supremely creepy film is about a mother and son who become stalked by an evil entity after reading about it in the weirdest children's book ever. Not only is this movie thought to be one of the genre's finest; it was also the third best reviewed movie of 2014, according to Rotten Tomatoes.

OK, so you know how it ends, but I bet you don't remember just how many creepy moments this film has leading up to the famous twist. Just imagine yourself as a kid walking up behind your mother in your kitchen one night, only to have the woman you thought was your mom turn out to be a terrifying ghost. Yeah, no thanks.

For several years in the 2000s, a Saw movie was released every Halloween and it wasn't by coincidence. Fans couldn't get enough of Jigsaw and his horrific torture of his victims, so the movies kept coming. If nothing says Halloween to you like Saw, Netflix has the first five in the franchise.

While the title conjures images of the tired "helpless female victim" trope, the aforementioned girl is actually a vampire who is very much in control in this feminist genre-bender. The film is shot in black and white and takes place in Iran (it's spoken in Farsi with English subtitles), but just because it's an artsy film doesn't mean it isn't spectacularly creepy.

10. Halloween 6: The Curse Of Michael Myers

While nowhere near as well liked as the original Halloween or even other early entries in the series, this movie represents your only chance to see Michael Myers do his thing on Netflix this year. I recommend you take it.

Haunted houses are an integral part of Halloween, and The Others is one of the most acclaimed haunted house movies ever — Nicole Kidman was even nominated for a Golden Globe for her performance. And that creepy kid claiming she's Kidman's daughter? Yeesh.

12. The Children Of The Corn

Stephen King is the master of horror, so you've got to see at least one movie based on his work this Halloween. And this is a good one. Imagine breaking down in a town with no adults, populated entirely by creepy kids. Scary, right? Make the lead kid a demon and it's downright terrifying. You can skip the six (!) sequels Netflix also has, as they don't come close to matching the thrills of the original.

This is probably the scariest film on Netflix. Why? Because it's real! This is a documentary about sleep paralysis, the mysterious condition wherein people finds themselves paralyzed upon waking and hallucinate terrifying creatures in their bedroom. Science has not been able to explain what causes it, leaving open the possibility that maybe demons and shadow people really are stalking your bedroom at night...

OK, now that everyone has sworn off sleeping for the month, it's time for some lighter fare. This '90s update on the '60s TV show is funny and fun, and just dark enough to warrant a Halloween viewing.

Monster Squad is the type of insanely fun, somewhat inappropriate kids movie that seemed to come out weekly in the '80s but simply isn't made anymore. It's about a group of monster-obsessed kids who discover that the Universal Monsters have invaded their small town for real, and it's up to them to stop them.

16. The Nightmare Before Christmas

Finally, if you need to bridge the gap between Halloween and Christmas, there's no better choice than Tim Burton's classic. Jack Skellington and company are perfectly watchable any day between October and December, so why not do just that?

This is just a sampling of the Halloween fare Netflix is offering this year. There are literally dozens more, so quit what you're doing, get streaming, and start screaming. But buy some candy first.

And for more Halloween, check out Bustle's YouTube channel: