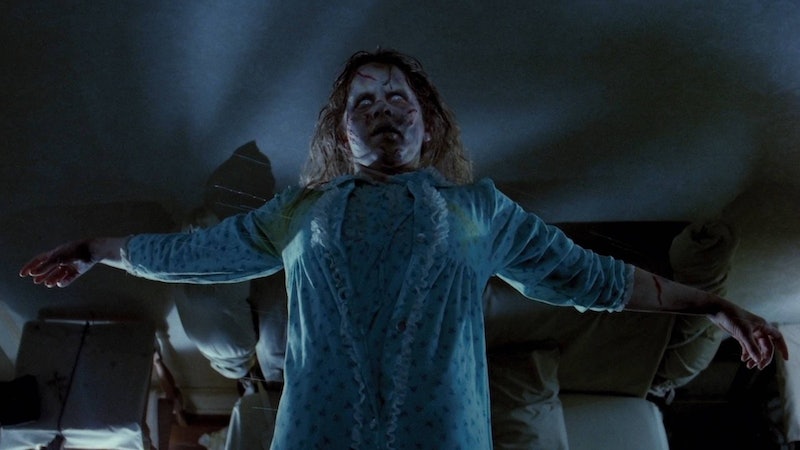 I readily admit that I'm a huge wimp who actively stays away from creepy TV shows, movies, and books. However, after being forced to watch a handful of horror movies at sleepovers as a teen, I do have an appreciation for iconic scary movies that everyone should watch. Although, now, in my adulthood, I tend to distance myself from scary stuff, there is nothing quite like that feeling of adrenaline coursing through your veins which makes you feel like you're likely to pee your pants if you get spooked one more time.

As a whipper snapper I had a way better tolerance for scary movies and series. Like most '90s kids I devoured a large portion of the Goosebumps book series and I also watched the TV show, but I had a bit of a love/hate relationship with the horror genre. My imagination was (and still is) insane; it can be my best friend or my worst enemy. I would eagerly read as many scary books and watch as many frightening movies and series as I could cram into my schedule but I would be left each night wide-eyed in the dark. One particularly vivid memory includes watching an episode of Goosebumps entitled, "Night of the Living Dummy II" which involved a ventriloquist dummy coming to life. After watching this episode I was scared to go to sleep and to this day I am still freaked out by ventriloquist dummies.

All that being said, I love movies and I didn't want to miss out on great movies just because I'm not a fan of a particular genre. So horror movie fans and scaredy-cats alike; watch these iconic scary movies when you're in the mood for a fear fest.

The Exorcist is arguably one of the scariest films of all time. It's about a little girl who has been possessed and the priests who are trying to exorcise her demon. If you're afraid of ghosts you're going to be in for a frightening ride. My brain will be forever haunted by the image of a young girl doing the crab backwards down the stairs — it's the stuff nightmares are made of.

The Blair Witch Project was particularly frightening to me as I watched it as a teen in the height of my home movie making phase. The plot follows a group of film students who are attempting to make a documentary about the Burkittsville legend of the Blair Witch. The clever thing about The Blair Witch Project is that the actors were given all of their equipment and told to go off into the woods while the filmmakers terrified them IRL. Because the fear is (in my opinion) real, it makes for a believably spine-tingling movie.

The Sixth Sense is my personal nemesis and I have only ever seen it in its entirety once. I was so freaked out by this movie that I couldn't go downstairs on my own in the dark for weeks. However I'm glad I've seen it because the movie's well-known catchphrase, "I see dead people" has been used multiple times in popular culture for comedic effect, for instance in the Family Guy adaptation, "I see good food at competitive prices." The only thing that helped me with my trauma was realizing that Mischa Barton played a puking ghost in her days prior to The O.C.

4. A Nightmare on Elm Street

If you look past the now cheesy special effects, the premise of this tale is truly terrifying. A group of teenagers are plagued by dreams of a frightening stranger who wears a glove that harbours knives for fingers. The worst part is: Whatever happens to them in their dreams happens to them in real life. I have vivid memories of a scene from one of the movies in this series that involves Freddy Krueger ripping out the veins of his victim and using them like puppet strings. Gory is not even the word.

Another terrifying slasher movie, this eerie movie features a killer who escapes his psychiatric hospital and begins stalking a teenage girl. This is a must-see, classic horror movie, not only because its popularity paved the way for the Halloween horror franchise, but also because it features Jamie Lee Curtis in her theatrical debut.

If you're in the mood for an eerie thriller The Others is sure to deliver. Nicole Kidman plays a mother alone with her children in a huge, old house in the middle of nowhere. One day, three servants arrive at the house and a series of strange events begin to unfold including her daughter drawing a picture of people she has apparently seen in their house. Kidman is phenomenal and it's really refreshing to see her in a horror movie. Plus the ending is not only very clever but also bone-chilling.

A freakish, supernatural storyline revolves around the urban legend of a videotape which, once viewed, will kill the observer within seven days. A journalist wants to discover the truth behind the tape and behind the deaths of some local teenagers who watched the video. After watching this movie, if you ever see anyone dressed up for Halloween with a really long, black wig covering their face you will metaphorically, if not literally, crap your pants.

Jack Nicholson does not disappoint as the protagonist of The Shining. Based on the Stephen King novel of the same name, the film centers around a man (Nicholson) who decides to become the new caretaker of a secluded hotel during the winter season. He is informed that the previous caretaker went mad — because of the solitude and confinement he experienced after being snowed in — and murdered his family. The man and his family move into the hotel anyway, but his son Danny has a frightening premonition about the coming months. I really love the stylistic elements of this movie but I will never, ever stay in a room numbered 237.

Poor Carrie is an outcast teenage girl who is bullied at school and abused at home by her religious fanatic mother. However, things start to look up when she realizes she has a special talent but will she learn how to control her power or will it control her? Think Matilda with a horror twist, starring a young John Travolta.

Prove that horror movies aren't just for Halloween and get the fear factor all year long with this selection of super scary movies.