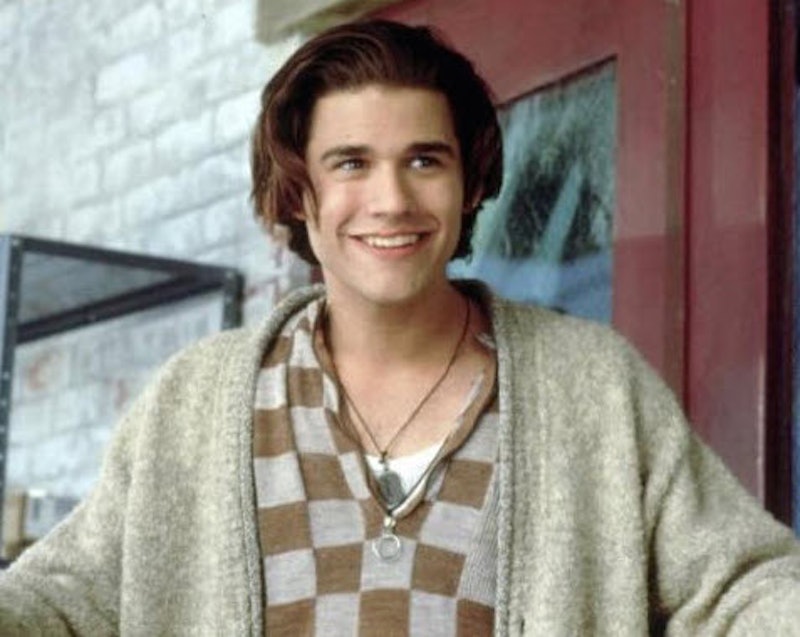 Oh, the 1990s. It was a better time for music, for cartoons, and, if you don’t mind me saying something truly controversial, fictional love interests. Admit it, you had PLENTY of ‘90s crushes that gave you totally unrealistic expectations for real life romances. And, for the majority of them I’m sure, you can’t even remember their names.

I mean, I hate to make you feel old, but the '90s were a long time ago, dude! Whether you went to high school with 1999’s collection of teen movies or you were a rugrat with the Rugrats, it’s hazy to think back on all those totally rad hotties.

Because the truth is that for every Leonardo DiCaprio or Jonathan Taylor Thomas, there were hundreds of hot but not-super-memorable randos that populated your VHS tapes. Hell, would you even remember JTT if it weren’t for his blatant nostalgia factor? So, let’s do something completely different and take a moment to just celebrated those forgotten lads that remain forever beloved .

Well, you know. “Forever” in only in a “wait, who’s that guy again, can we Google him real quick?” kind of way.

WHATEVER. Here is a totally subjective list of 11 ‘90s crushes you’ve stopped writing about in your trapper keeper.

Zack From She's All That

Let's start light, because you all have vague recollections of Freddie Prinze Jr., amirite? He used to be a TOTALLY BIG DEAL, and the sideburns in She's All That are to die for, there's no denying that.

Oh my god, heeeeeey. It is utterly unclear why Corey would EVER lust for human slime bucket Rex Manning when this piece of grunge perfection was in front of her, but I'm glad she changes her mind by the end of the film.

Sam Coulson From Never Been Kissed

Look how perfectly chiseled his face is! Setting the standard for all teacher crushes from this point forward.

It's not that you FORGET Travis himself, as I'm sure you're like me and watch Clueless tri-weekly. It's just that between the equally fine Paul Rudd and Donald Faison, you probably draw a blank on the adorable skateboarder. It's Breckin Meyer, you guys. He does a lot of work on Robot Chicken, and he was an essential part of DuJour in the Josie And The Pussycats movie.

It makes me feel like a TOTAL creep to say that I love this guy. But hey, I think he's super cute, and yes, I get some comfort in knowing that he is now 39 years old in real life.

Jay From Clerks, Mallrats, And Every Other Kevin Smith Film

OK, this might be a regional infatuation and I don't expect you'll get it unless you're from my very specific area of central Jersey... but rest assured, this is a thing for those who are into foul-mouthed, friendly-neighborhood-drug-dealer types.

Trip Fontaine in The Virgin Suicides

Oh my God, remember when Josh Harnett was like a huge deal for that one week in the late '90s? Well, let this entire movie be a fresh reminder: he's a magic man.

This one had me seriously racking my brain to my friend like, "oh, who was Julie's love interest, what's-his-face with the hair?" He is VERY cute, but he just gets lost between all the homicide and delicious evil of Courtney Shane (who is TOTALLY the most crush-worthy character in that film, BTW).

Basically Everyone From Detroit Rock City

If you have never seen this movie, plz go do it now because it has four cute rock-n-roll teenagers that are obsessed with KISS. Very pertinent to my interests. THAT SAID, the most recognizable dude in the group is probably Edward Furlong.

Nobody can forget the Adonis-like good looks of Sebastian. You would forgive him for his intentions being cruel, believe me.

Wow, what a collection. Time to blow the dust of the VHSes so I can relive the romance.