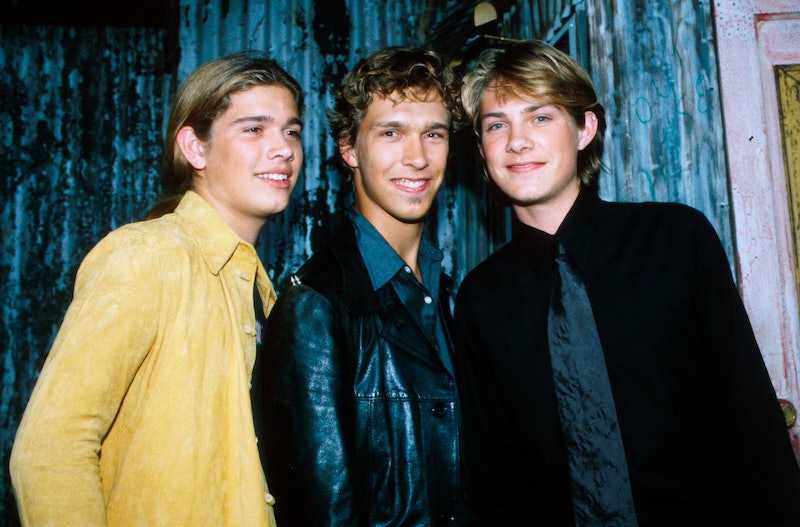 If you were anything like me growing up, then you probably had lots and lots of crushes. I had so many crushes as a kid in the '90s that I’m fairly certain I’ve had to forget at least half of them just so my brain could make room for more crushes. I had crushes on friends, enemies, foreign exchange students that I was too shy to talk to, ballet instructors, cartoon royalty, and even weirder than that, biblical characters (I mean, Esther did save her entire nation whilst armed with only her wit and beauty after all.) But the biggest percentage of my crushes were on '90s celebrities — both real and animated. Which is actually kind of impressive considering I was pretty much only exposed to cable television when I visited my grandparents.

Lucky for me, I was a '90s kid, so I had a plethora of talented, quirky, smart, inspiring, and beautiful celebrities to crush on. Not that kids today don’t have plenty of amazing celebrities to look up to and inevitably crush on as well, but there was just something special about the '90s. I honestly wouldn’t trade my '90s childhood for any other decade, and I still kind of cherish my '90s celebrity crushes. If you were a '90s kid too, you probably crushed on one — or if you were like me — all of these celebs.

Denzel Washington was by far my biggest girlhood crush. The man is, was, and will always be gorgeous in a way that simply kills me. Plus, he has enough talent and confidence for two dudes. I didn’t just watch and re-watch Remember the Titans for its heartbreaking/heartwarming story of victory and brotherly love. You best believe Mr. Washington’s dashing good looks played a considerable role in my love for that film. I mean, damn.

I don’t remember exactly when I started crushing on Julia, but it started sometime in the '90s and it’s never fully gone away. Her smile and laugh have always made me smile and laugh, and I still think she’s an incredibly dynamic and beautiful woman.

Home Improvement was one of the few TV shows we watched in my house growing up because it was actually on our local access channel, and I think I would have watched it all day if my parents would have allowed it. I had mad butterflies for J.T.T. In fact, at one point in my childhood, I genuinely expected to marry him.

4. Any of the Hansons

Almost every day after school for most of 1996 I could be found sitting on a bean bag chair in my big sister’s room listening to the Hanson’s album, MMMBop from start to finish. I’m not kidding. We adored all three of those high-pitched, beautiful blondes. But, of course, I saved a special spot in my heart for Taylor.

What can I say? These two were always going on adventures and they were, (and are) two of the prettiest, most fashionable girls out there.

My heart still melts for this guy. That bleachers scene in 10 Things I Hate About You ? Endearing and hilarious, just like Heath was in so many of his roles.

This pretty lady put stars in my eyes. I just remember seeing her on screen and thinking, this is the most beautiful woman I’ve ever seen. Why else would I watch the live action Flintstones movie a hundred times? I wasn’t even a fan of the cartoon.

Do I even need to explain this one? Voice of an angel, handsome as hell. Plus, I don’t care what anyone says — NSYNC was better than The Backstreet Boys.

Okay, so I wasn’t a superfan or anything. I only got to listen to Britney’s music when I heard it on the radio at gymnastics or the grocery store. Her music was banned in my house, which I kind of understand, but I still had a bit of a thing for her. I mean, the girl had some crazy gorgeous locks and the singing voice of a cartoon character/robot. In a good way.

Who doesn’t love an underdog? That thick, silky, raven hair? That mischievous charisma? Add his love and loyalty for Abu into the mix and you’ve got yourself one crush-worthy cartoon character. Do you trust me?

Say My Name is still one of my favorite songs, and all three singers are so pretty it blows my mind. On top of that, their music made me feel strong and empowered, even as a little girl. I’ll never forget that.

I don’t know exactly what it is about Will Smith, but ever since Men in Black I’ve had a bit of a thing for him. He’s good-looking, of course, but more importantly than that he’s always made me laugh, and I really love to laugh.

As a kid who spent at least 50 percent of her time in the Mark Twain National Forest with her dogs, I had a special kind of crush for this little dude who lived in a jungle, slept in trees, called a bear and panther best friend, and won a fight with a tiger. Honestly, how couldn’t you crush on this fella?

Full disclosure: I wasn’t permitted to watch this as a kid so I’m not a “real” fan. But I did have a Sailor Jupiter doll and I thought she was just the prettiest doll in the whole world. I don’t know if it was her killer uniform, her silky brunette mane, or those stunning green eyes. But I had a crush on Sailor Jupiter.

To be completely honest, I never really had a crush on Leo until he got far past the '90s. But almost all of my girlfriends had his face posted all over their bedrooms when we were kids. He is just the quintessential '90s crush.

I liked everything about this character when I was a kid. The dude’s fearless, he has rock star hair, and he’s good at everything that is both scary and athletic. So, yeah, I had a huge crush on him. RU-FI-O!

How could I not have a crush on this Disney princess? She had beauty, grace, and strength—and I think she might have been my first feminist role model besides my mother. I asked my dad to take me to see Pocahontas in theaters four times in 1995, and he actually did it. That’s how blatantly I adored her.