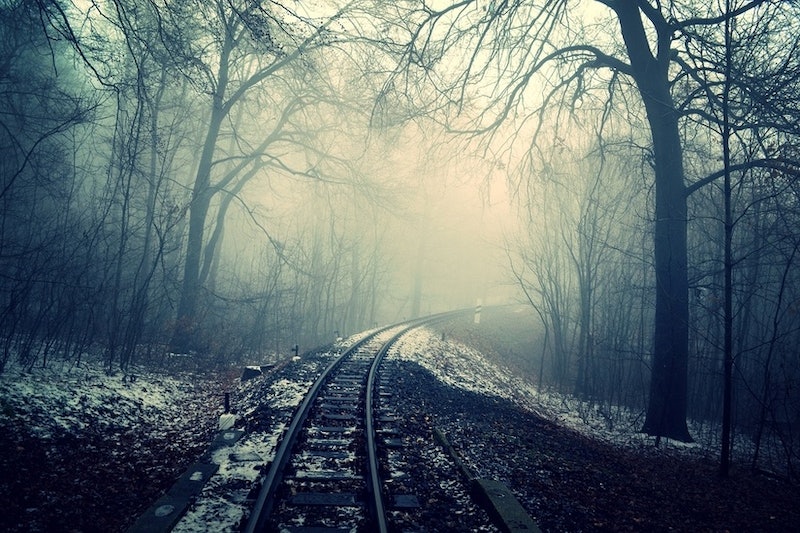 Spiders, monsters under the bed, heights. There are a lot of different things people will admit to being spooked by. But deep down, what do we really fear? Researchers at Southern California's Chapman University wanted to get to the bottom of this question. In a recent study, they asked Americans what they fear most. Guess what? It's not monsters under the bed. It's not even spiders. Our worst fears, it turns out, are very, very real.

For the second annual Survey of American Fears, researchers interviewed a random sampling of 1,541 adults. Participants were asked to rate their level of fear for everything from public speaking to tornadoes to Obamacare. There were 88 fears total involved in the study, which spanned five categories (Government, Technology, Man-Made Disasters, Natural Disasters, and Crime). In order to be counted towards the overall fear statistics, participants needed to report they were either "afraid" or "very afraid" of something.

Think you already have the top 10 figured out? Think again. The list does include things like clowns — and yet, not one of the fears that made the top 10 is your stereotypical form of fright. In other words, Ryan Murphy won't be sourcing this study for future American Horror Story material any time soon.

Below, find out the top 10 things Americans fear (and the percentage of Americans that fear them). Head here for more.

If you've ever been the victim of credit card fraud, you know what a nightmare this situation can be. It's all the more scary because it can happen so easily — NASDAQ reports that over 30 million American consumers' credit cards were breached in 2014 alone.

Between student loans, car payments, rent, and Seamless orders, what portion of a paycheck is left over? OK, so maybe Seamless isn't essential for our everyday existence ... but money is seriously the worst. Bitcoin, anybody?

At least I won't feel so bad about my own personal economic collapse if the whole world is on the same page.

Similar to credit card fraud, identity theft is a quick and dirty way that criminals can majorly mess up your life. The only good thing to ever come out of identity theft? Those amazing CitiBank commercials.

According to the Encyclopedia Britannica, biological warfare refers to "any of a number of disease-producing agents — such as bacteria, viruses, rickettsiae, fungi, toxins, or other biological agents — that may be utilized as weapons against humans, animals, or plants." Basically, this is when creepy video games become real. I don't know about you, but I'd much rather have Dancing Baby Groot on my side.

Because the last thing anyone would want is the 2016 presidential candidates finding out about their Neopets habit. Not that, you know, I have a Neopets habit or anything ...

Just last month, Americans observed the 14th anniversary of the September 11 attacks. Though that day moves further and further into the past, this statistic proves its impact is still fresh in our minds.

Interestingly, people fear corporate tracking more than governmental tracking. Admittedly, it is pretty creepy when you search for something and get a thousand ads for it popping up on your Facebook page a week later.

With the advent of so much amazing technology in the past few decades, it's inevitable that someone will try and use it for the worse. In early 2014, President Obama declared that cyber-terrorism is the United States' "greatest threat."

Clocking in a full 13.2 percent higher than any other fear was fear of corruption in government. Who wouldn't be troubled by the thought that the very people intended to protect us could have malicious intentions? Or maybe the people surveyed have just been watching a lot of House of Cards recently.