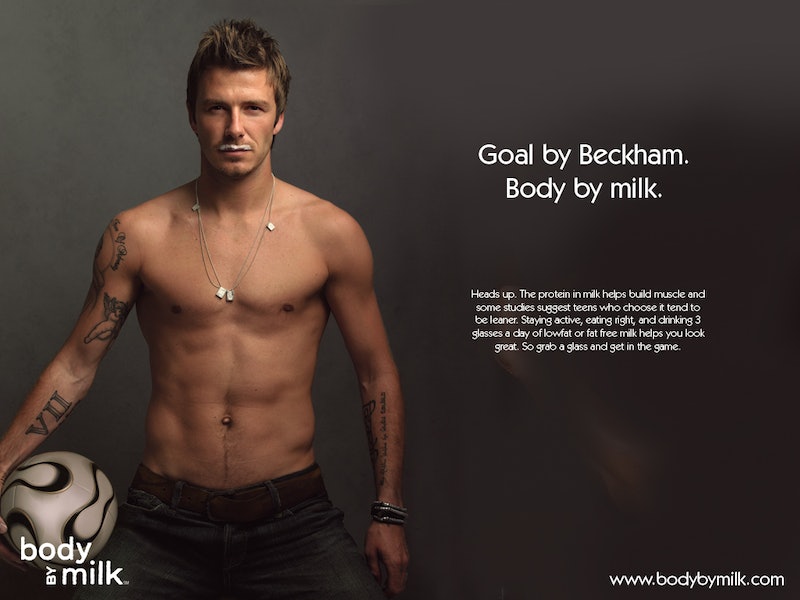 "Got Milk?" I loved plastering those '90s ads to my walls, the images of celebrities I loved telling me I needed to drink plenty of milk to grow up strong and healthy. Until recently, I still believed that milk and yogurt were necessary for me to get enough calcium in my diet. I thought that since my organic milk didn't have hormones, it was ethical and good for me.

Sure, I was a vegetarian, but milk and cheese were different. Those cows got to live; grazing on the green, open pastures illustrated on my half & half carton. It was what I wanted to believe.

But reading scholar and animal rights activist Elise Desaulniers' book Cash Cow: Ten Myths About The Dairy Industry taught me otherwise. Her excellent work breaks down the myths most of us believe about dairy into 10 digestible chapters. I've used her work as a jumping off point to examine nine milk myths that I used to believe, and how Desaulniers's work debunks them.

These facts might not be pretty, but I think we all have an obligation to know what we're actually pouring into our coffee.

While organic milk might not contain synthetic hormones like rBST, it is still chock-full of sex hormones which, though not technically "added," are not good for humans. Dairy cows are "milked three hundred and five days per year, which means they are also milked for most of their pregnancy," Desaulniers writes. They are artificially inseminated so that they are kept pregnant and lactating almost all the time. That's why all milk contains a significant amount of the sex hormones estrogen and progesterone, the two pregnancy hormones, whether it's organic or not.

Not only is being constantly pregnant while they produce milk uncomfortable for the cows — it also might be pretty bad for humans who drink their milk.

In 2006, Harvard researchers published the results of a meta study that looked at 100,000 women aged 26 to 46. Those who had the highest intake of meat and dairy products also had the highest risk of breast cancer (33 percent more than those who consumed the least). For men, over 20 studies have established a strong link between prostate cancer and milk consumption. Hormones in milk might also be to blame for the rise of "man boobs": A 2010 Japanese study found that men's testosterone levels decreased after they began drinking milk.

"Among the routes of human exposure to estrogens, we are mostly concerned about cow's milk, which contains considerable amounts of female sex hormones," Dr. Davaasambuu Ganmaa said in a talk at Harvard. Dairy, she added, accounts for 60 percent to 80 percent of estrogens consumed by humans today.

That more of us don't know just how much drinking milk could increase our risk of cancer seems like a scandal — to say the least.

In reality, milk actually has far more health risks than benefits. As we saw above, studies show that milk appears to increase your risk of developing certain types of cancer. But the health problems that milk creates don't end there: Three-quarters of us actually lack the enzyme to properly digest cow's milk and thus suffer digestively even if we're not lactose intolerant (though we might not realize how much we're affected until we cut out dairy and find ourselves less bloated, with clearer skin).

Milk also contains allergens and is one of the most common food allergies. One study removed dairy from the diets of 48 people suffering from either migraines or asthma — and 33 of them reported their condition improved significantly.

Then there are the more serious health risks: Over 100 studies have found a strong correlation between Type 1 diabetes and the amount of milk consumed by children. Another study conducted on 7,500 men showed that those who drank more than two glasses of milk a day were twice as likely to develop Parkinson's disease as those who didn't.

Myth #3: You Need Milk To Get Enough Calcium & Prevent Osteoporosis

Anyone who grew up with the food pyramid probably believes that drinking milk is the best way to build strong bones and prevent osteoporosis.

In reality, this myth was created by the dairy industry — dark, leafy veggies are actually a far better source of calcium. On average, we absorb just 30 percent of the calcium found in milk, yogurt, and cheese; but we absorb twice the amount of calcium if we eat veggies like kale, broccoli, bok choy, spinach and lots of other plant-based foods that are really good for you in lots of ways. As the chart above shows, you can also easily get all the Vitamin D and protein you need without dairy or meat.

Furthermore, milk might actually increase your risk of breaking bones. A Harvard Nurses study of 77,000 women that spanned 12 years found that those who consumed more than two glasses of milk a day actually had a higher risk of breaking a bone than women who drank one glass a day or no milk at all.

Female cows produce milk for the same reason human females do: to nurse their young. The sad truth is, whether the milk you drink is organic, local, or chock-full-of-rBST, it is the result of baby calves being torn from their mothers so that you can drink the milk instead.

In order to produce enough milk to meet human demands, dairy cows are kept pregnant or lactating for the majority of their lives. It is anything but natural. "Cows are not 'designed' to produce milk like that. They do not give milk because they are happy. They do it because we force them to," Desaulniers writes.

Cows born with one or more extra teats (which is not uncommon) often have them cut off by farmers so that their udder is better suited for the milking machine. While a cow nursing her calf would naturally produce seven kg of milk a day, we make them produce 27 kg. As a result, female cows often develop mastitis, a painful infection nursing women will be familiar with — and die at an average age of four from exhaustion or slaughter.

Myth #5: At Least Dairy Cows Get To Live

Slaughter awaits all dairy cows — if they don't die of exhaustion or infection first. Male calves are slaughtered soon after they are born to produce veal, and female calves — who are quickly put to work producing milk around the clock like their mothers — are slaughtered after their milk production decreases or their bodies give out, usually around age four (cows can normally live up to 20 years).

"We must face the facts: There is no moral distinction between milk and meat," Desaulniers writes. "The same animals are milked, then sold, then finally slaughtered ... legal scholar Gary L. Francione sums it up perfectly: 'There is probably more suffering in a glass of milk or ice cream cone than there is in a steak.'"

In the United States, The Animal Welfare Act, which is the main piece of legislation prohibiting animal abuse, exempts farm animals completely.

Myth #6: The Cows Don't Know Any Other Way

Cows might be "domesticated" but that doesn't mean they don't have natural life cycles of their own, like dogs or cats. Much like us, cows would naturally nurse their young for six to nine months, weaning their babies gradually. Heifer (female) cows stay with their mother for life. (And you thought your mom was clingy.)

Because those baby cows would drink their mother's milk, "On modern farms, newborn female calves are immediately isolated in individual boxes or stalls, depriving them of physical contact and social interaction," Desaulniers writes. This isolation is "necessary" so the their mothers can give their milk to humans instead. Both the mothers and calves are very much aware of what's happening, and the mothers often cry in grief and hope, calling to their babies for days or weeks after the separation. According to Woodstook Sanctuary, a reputable animal advocacy nonprofit, "if mother and calf have been separated by a fence, the mother will wait by the fence in vain, through rain or scorching heat, foregoing meals and water. Some mothers will even break through fences and wander for miles in search of their babies."

This cycle of forced insemination and separation is repeated for every baby a female cow bears, which usually happens four to seven times in her short life.

Cows are intelligent beings with feelings, who experiences pain and develop social structures — just like us. They are capable of holding grudges against other cows for months or years; feeling joy after they solve a complex problem; and even seeking out human help in anticipation of a difficult birth.

Despite the happy cows on our cartons, organic milk certification has more to do with what kind of grains the cows eat than it does the way they're treated.

Just like other dairy cows, organic cows are artificially inseminated and kept pregnant and lactating for the majority of their lives. Their babies are also taken away from them at birth. While conditions are slightly better — they have to have access to grazing in the summer and exercise twice a week — organic cows suffer mastitis and premature death at just as high a rate. When their productivity decreases, they are also killed for meat.

Unfortunately, you can sometimes actually have a larger carbon footprint from eating locally because the production processes of small farms are not always efficient enough to cancel out the footprint of shipping done by larger brands.

Beyond that, the environmental footprint of dairy in any form is huge — cheese has the third-highest carbon footprint of any food, second only to lamb and beef. As most of us know, grazing cows emit a huge amount of methane, and there are far more dairy cows emitting the gas while producing milk for us than there are cows being slaughtered for meat.

In fact, studies show that if you even went vegan for one day a week, you would have a greater positive environmental impact than if you were a locavore (someone who eats everything locally) seven days a week.

Myth #9: Milk Has Nothing To Do With Feminism

You might have thought that eating animals or drinking their milk has nothing to do with feminism — but after reading about the way female cows are enslaved, forced to reproduce, and have their babies taken from them, I hope you feel the connection.

I think Desaulniers puts it best: "As with sexism or racism, carnism [the ideology of consuming animals] is based on the idea that 'this is how things are.' In many cultures, it is 'normal' for women to be treated as inferior to men ... In all these cases, the 'norm' conceals an ideology (sexism, racism, carnism) that seeks to make us accept values as mere facts. Yet we are perfectly free to choose to combat these ideologies if we believe in a few principles, like welfare, justice, autonomy or compassion. I think it's even a moral duty."

It can be empowering to realize that your feminism and sense of social justice can apply to all living beings. If cutting out dairy altogether feels like too big a leap, perhaps start with one day a week, and take it from there. Remember, your environmental impact will be significant — and you might be surprised at just by how great you feel, both physically and ethically.