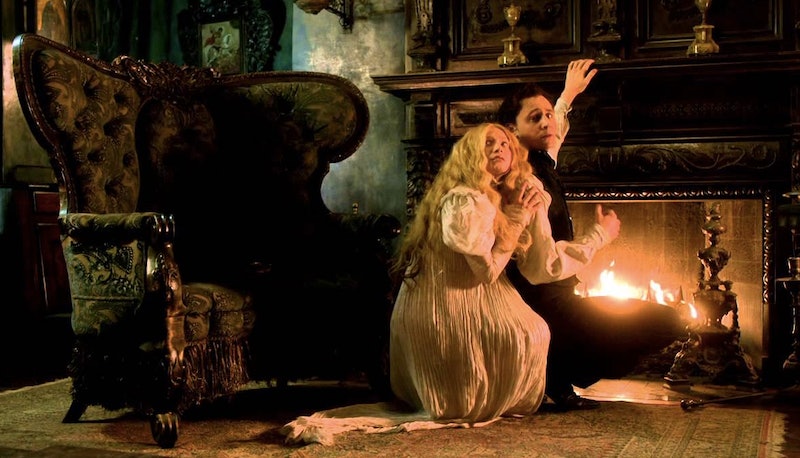 When a film is as chock full of intrigue, mystery, fantasy, and horror as Guillermo Del Toro's Crimson Peak is, you might wonder how a person could find time to focus on one, measly little sex scene in a vast expanse of visual delights. (See: Really cool, creepy ghosts and a epic fight scene between Mia Wasikowska and Jessica Chastain — I know, I wondered if this was real life too.) However, Tom Hiddleston and Wasikowska's Crimson Peak sex scene stayed with me in a big way. (And no, not just because I can appreciate the thinking woman's heartthrob that is Tom Hiddleston.)

You see, while I initially warmed to the scene because, well, it's pretty hot, my brain got pretty into it too. The entire scene between Hiddleston's Thomas Sharpe and Wasikowska's Edith is, from set-up to finish, absolutely dripping with agency — Edith's agency.

Earlier in the film, Thomas and Edith get into a heated, passionate make-out — one which is surely leading to their first intimate experience together... until Jessica Chastain's Lucille interrupts them. Not only did I, as a viewer, feel like the rug was ripped out from under me, but apparently so does Edith. A few scenes later, she asks Thomas if they can stay at an inn when the winter storm starts to get too perilous for them to travel home — if they left right that second, they probably would have made it home without issue, but Edith is insistent on staying outside of their home. On one hand, Edith probably wants to get time away from the haunted house, but on the other, I'd wager she was also hoping for a night in which Thomas didn't leave their bed to run around said haunted home: She is ready to have sex with her husband and she takes this chance the second it comes along.

Then comes the matter of the actual steamy scene. Warning: When I say "steamy," I mean it.

The brief encounter is passionate and absolutely consensual — there's no coaxing on Thomas' part, no hesitation on Edith's. And then there's the matter of clothing: Throughout the scene, Edith is basically completely clothed while Thomas is the one bearing it all (including his backside, which — sorry — you'll have to see the movie to get a gander at). And while the reversal of typical sex scene roles, which often see the woman completely disrobing for the man's visual benefit, is fantastic, it's not even the best part of the scene.

Once Thomas gets going, Edith flips him and gets on top, guiding her own pleasure — the pleasure that she orchestrated in a marriage in which, up until this point, she seemed to have little choice or autonomy. She wanted to this to happen, and she got exactly what she wanted out the situation.

It's clear from the tenderness of Thomas' actions to the angles Del Toro employs to Edith's scene-ending shot, that this sex scene is focused entirely on Edith's pleasure. That final look of pure bliss on her face as she consummates her marriage is her reward and, as movie-loving womankind, ours.

More like this
What Makes A Sally Rooney Sex Scene So Hot?
By Samantha Leach
Long Live Bennifer!
By Allie Jones
Shocked Fans & Former Co-Stars React To Ray Liotta’s Death At 67
By Grace Wehniainen
'Stranger Things' Star Joe Keery Is Dating An "Indie Scream Queen"
By S. Atkinson and Grace Wehniainen
Get Even More From Bustle — Sign Up For The Newsletter