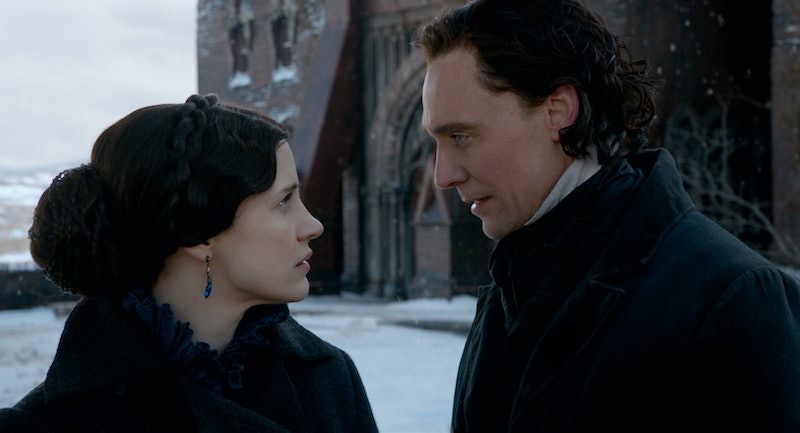 Guillermo del Toro's latest movie, Crimson Peak, covers a lot of ground when it comes to genre, but in short it's a gothic romantic horror — although not the kind of horror movie you would expect. In fact, there are a lot of unexpected things about this movie — namely, Crimson Peak 's incest plot. As you might expect, spoilers ahead!

In the movie, Edith (Mia Wasikowska), a budding author, is writing a ghost story when she meets Thomas (Tom Hiddleston), an inventor who comes into town, hoping to get some investors for his latest invention, a machine that digs up potentially valuable red clay from the grounds of his estate. They fall for each other and get married, and go off to live in his remote estate, Allerdale Hall with his sister, Lucille (Jessica Chastain). With a tightly wound corset and dangling set of keys by her side like Nurse Ratchet a la One Flew Over The Cuckoos Nest, Lucille is immediately presented as a cold, merciless woman. When she first meets Edith, it's obvious she does not want her there — perhaps because she has feelings for Thomas, too. As Lucille interacts with her brother, there is an immediate eerie feeling of sibling love. Yes, Crimson Peak adds to Hollywood's fascination with incest.

Incest was certainly not a topic I expected in a movie like this, but surprisingly, the practice was commonplace in gothic novels. In an interview with io9, Hiddleston said, "The thing about gothic romance is, there’s always a sexuality at play, and incest has been something that’s been hinted at by other novels in the genre." In regards to Thomas' relationship with Lucille, Hiddleston said that it's an interesting dynamic. "They’re a brother and a sister who’ve been orphaned, and they’re in this big old house, and they have a very deep connection," he said. "But there’s a lot of other romantic elements in the film, too."

This incestuous brother-sister relationship is not alone to Crimson Peak, though. It was also reflected in the recent movie adaptations of V.C. Andrews's Flowers in the Attic, which was the start of a gothic series of books running rampant with incest. In it, the oldest brother and sister, who are essentially abandoned by their mother, fall in love after being trapped in the attic of a huge, creepy house. The 1987 feature version of the book was a little more discreet about the taboo romance, whereas the 2015 Lifetime TV movie blatantly put it out there.

The use of incest is something that we often see in movies because it's taboo. It's provocative, and audiences are always interested in the risque. Filmmakers tend to throw it into their movies to push buttons (although sometimes, it's also used as a metaphor to challenge social order). It is interesting to see how different films tackle the subject: foreign and art house films, for instance, tend to handle it delicately, with insight and intrigue. The French film Ma Mere, starring Isabelle Huppert, tackles the classic Oedipal complex, depicting the amoral relationship between a mother and her son after the death of his father. Similarly, Academy Award winners Julianne Moore and Eddie Redmayne played a real-life mother and son, Barbara and Anthony Baekeland, in 2007's Savage Grace. The two allegedly had an incestuous relationship, which ended with the murder of Barbara at the hands of her son.

In the 2003 Korean film Oldboy, incest is used as a form of revenge when the movie's main character, Oh Dae-Su (Min-sik Choi) finds out that he has been having sex with his daughter after being manipulated by a man he had done wrong years ago. It's a cruel plot twist and is essentially a punishment. Then there's Shame; Michael Fassbender and Carey Mulligan play brother and sister in the 2011 film, and although there isn't any blatant sexual interaction between the two, their relationship alludes to incest based on something that happened to them as children. It apparently made him a sex addict and her unable to have a relationship. Again, there's an element of punishment.

With more mainstream Hollywood movies, incest is often treated like a punchline. This is most evident in 2001's Say It Isn't So where Gilly (Chris Klein) finds out that he might be sleeping with his biological sister, Jo (Heather Graham). The movie is essentially a 95-minute joke that could very well be told by your drunk uncle during Thanksgiving dinner. Other movies just touch on the topic, using the issue to give viewers a good laugh. When Marty (Michael J. Fox) travels back into time in Back to the Future, he meets his mother (Lea Thompson) as a young woman who falls for him and is desperate to jump his bones (ew). The same situation happens in 17 Again, where Matthew Perry becomes a teen in the form of Zac Efron. When his daughter attempts to hit on him as his younger self, hilarity (and creepiness) ensues. And the big running joke in pop culture is in The Empire Strikes Back when Leia (Carrie Fisher) kisses Luke (Mark Hamill), not knowing that they are twin brother and sister. The kiss is never addressed in other Star Wars movies, but the audience will never forget.

Hollywood will always push the envelope when it comes to incest — even if it is one of the creepiest, most uncomfortable things to watch. And that's exactly why they'll do it.

More like this
A 'Bridgerton' Star Just Dropped A Major Hint About Joining The Live-Action Barbie Cast
By Bustle UK
Why The '365 Days' Sex Scenes Are Good, Even If The Movies Aren’t
By Arya Roshanian
Here’s Everything Coming To & Leaving Netflix In June
By Alyssa Lapid
10 Must-Read New Books Out This Week
By K.W. Colyard
Get Even More From Bustle — Sign Up For The Newsletter