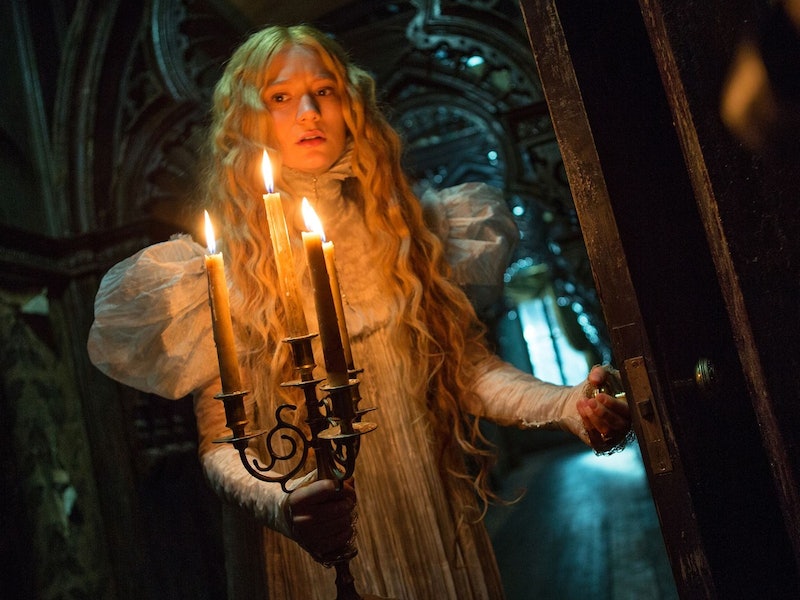 Guillermo Del Toro started out directing Spanish-language horror films, but he is best known in the U.S. today for his wildly inventive movies that often deal with dark subjects. Pan's Labyrinth, Pacific Rim, and the Hellboy series all showcase stunning visuals while also bringing a dimmer world view than is typical to their respective genres. And though Del Toro's recent films are known for their often grim tones, they're not examples of chilling horror, by any stretch. But his newest film, Crimson Peak, looks like it's going to change that and bring the director back to his fright-filled roots. How scary is Crimson Peak , you ask? Well let's just look at the plot: the film, starring Tom Hiddleston, Mia Wasikowska, and Jessica Chastain, is about a newly married woman who moves into her husband's family's old estate and finds the house to be full of ghosts and secrets. That's one chilling concept, and the movie's trailer, while featuring the beautiful imagery typical of Del Toro, looks creepy AF. So yeah, if you get scared easily, you may want to avoid Crimson Peak.

The film definitely has a lot of appealing aspects for non-horror movie fans, like its gorgeous set design and excellent cast, but at the end of the day, this is a movie that is made to scare the pants off of you. Del Toro himself has warned that the movie is scarier than anything he's ever made for English-speaking audiences, and is more akin to the old Spanish horror films on which he cut his teeth. The director also lists some of the most frightening films of all time, like The Haunting, The Innocents, and The Shining, as his major influences on Crimson Peak. As if that wasn't enough reason for why scaredy cats should avoid this movie, the director also claims that one scene in the film was influenced by a night he spent in a haunted hotel in New Zealand, where he was so scared of possible ghosts that he was unable to sleep.

But Del Toro isn't the only one touting the scariness of Crimson Peak. The master of horror himself, Stephen King, saw an early screening of the film and called it "f—king terrifying", comparing it to The Evil Dead. If you think you're harder to scare than the guy who wrote It, Pet Sematary, and Salem's Lot, well, you're wrong. Crimson Peak is so scary, in fact, that it even frightened the actors working on the film. Hiddleston has said that the atmosphere during filming was spooky, and told DailyMotion that this was the first time he'd ever been scared while reading a script. If he was reading the scene depicted in the clip below, then I certainly don't blame him.

In case it isn't obvious by now, Crimson Peak is a seriously scary movie. Anyone who sees it should go into it with the expectation that they're not going to sleep for several days afterward, and will probably not want to stay in any old, Gothic houses for awhile. Don't say I didn't warn you.