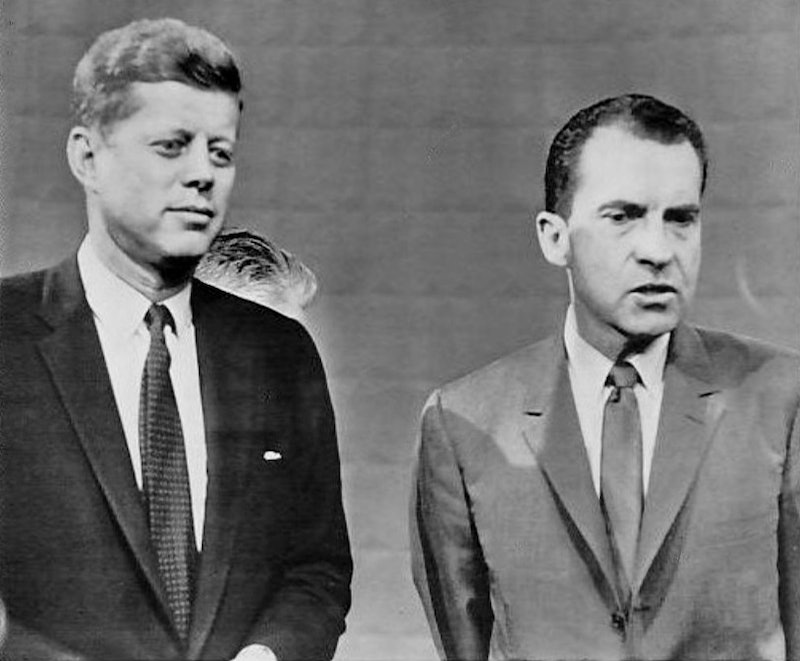 Although the idea seems impossible to wrap your head around now, there have actually be a lot of presidential elections that were weirder than the 2016 election... at least so far. Sure, it may seem like the antics get bigger every day. We have an insanely bloated Republican field, the mud-slinging is out of control, a reality TV star is crushing the competition, and a political candidate handed out his competitor's private phone number. I know it seems like things can't get weirder. But trust me when I say that they can. They really can.

Look on the bright side: even if the campaign process is full of crazy antics, the actual election is likely to be pretty cut and dry. It's unusual to have problems with the electoral college, everyone's primed to combat election fraud, and there's unlikely to be any third party candidates to throw off the system.

The 2016 election may go down as one of the most entertaining, but it's still got a long way to go before it becomes the most bizarre. America has been electing people to office for awhile now, which means that we worked out some of the weird kinks in the system awhile ago. And although it may seem like the candidates have no filter, some of the campaign rhetoric we hear today is pretty tame compared to the things our Founding Fathers threw out there. Don't believe me? Check out some elections that could put this one to shame.

When John Adams and Thomas Jefferson ran against each other in 1800, it was a bloodbath. If we think it's bad when Donald Trump calls the other candidates "losers," he's got nothing on these two. A lot of it started with Jefferson, who used connections with a printer to circulate pamphlets insinuating that Adams wanted war with France and that he had a "hideous hermaphroditical character, which has neither the force and firmness of a man, nor the gentleness and sensibility of a woman."

The craziness of this election didn't stop there, either. At the time, the electoral college picked the president and vice president by voting for their two favorite candidates, and whoever came first got to be president, while the runner-up became vice president. During the 1800 election, it came down to Jefferson and Aaron Burr and resulted in a tie. It took seven days for the House of Representatives to break the tie, and they were presumably so annoyed by it that they created the 12th Amendment, which switched up the electoral college process and made it so that this could never happen again. Jefferson won, and Burr went on to be known as the guy who killed Alexander Hamilton in a duel.

When Democrat Horace Greeley ran against the incumbent Ulysses S. Grant in 1872, he didn't have much of a chance. He got destroyed in the popular election, but Greeley still held out hope for the electoral college until he suddenly died before the official votes were in. Grant would have won anyway (Greeley only got 66 votes, compared to Grant's 286), but there's something distinctly less satisfying about winning against a dead man.

The 1920 election isn't notable because of the candidates from the major parties (Warren G. Harding and James Cox), but rather the candidate from a third party. Eugene V. Debs, the nominee for the Socialist Party, mounted his fifth and final presidential campaign — from prison. He was jailed for opposing World War I and managed to run his campaign from behind bars. Debs ended up with 3 percent of the popular vote. Clearly Bernie Sanders needs to work on his Socialist cred.

During the 1928 election, one of the largest issues was prohibition. Al Smith, the Democratic candidate running against Herbert Hoover, was staunchly against prohibition. As a result, a large portion of his campaign focused on supporting the creation, distribution, and sale of alcohol and doing away with the amendment that made consumption illegal. The election itself wasn't that notable (Hoover won), but it did give us the absolute worst campaign slogan in all of American history: "Vote for Al Smith and he'll make your wet dreams come true."

During the election of 1968, someone needed to tell Richard Nixon and Hubert Humphrey to stop making televised campaign ads, because they were absolutely terrifying, The two engaged in a back and forth of negative TV spots. But it seems like they weren't only competing for the presidency, but for who could create the most bizarre commercial possible. Nixon's looked like a pink-tinged acid trip, while Humphrey's just featured someone maniacally laughing at Spiro Agnew's (Nixon's running mate) name.

While all the GOP candidates were namedropping Ronald Reagan during the primary debate, I bet none of them remembered Debategate, a widely forgotten event from Reagan's 1980 bid against incumbent Jimmy Carter. As the two prepared to face each other for a debate after a long, bitter campaign season, Carter and his staff discovered that all of his debate prep had gone missing. His papers were conveniently "found" by one of Reagan's aides, who used Carter's notes to help Reagan prepare for the debate. As history shows, Reagan absolutely creamed Carter in that debate and went on to unseat him. America has mostly forgotten, but not Carter, who is still very bitter about the whole ordeal.

More like this
Watch Jacinda Arden’s Devastatingly Honest Resignation Speech
By Sam Ramsden
What The UK Blocking Scotland’s Gender Recognition Bill Means
By Sam Ramsden
The January New Moon Will Be A Blissful Night For These 3 Zodiac Signs
By Brittany Beringer
Man Meets Politics: ‘Boy Meets World’ Star Ben Savage Is Running For Congress
By Jake Viswanath
Get Even More From Bustle — Sign Up For The Newsletter
From hair trends to relationship advice, our daily newsletter has everything you need to sound like a person who’s on TikTok, even if you aren’t.