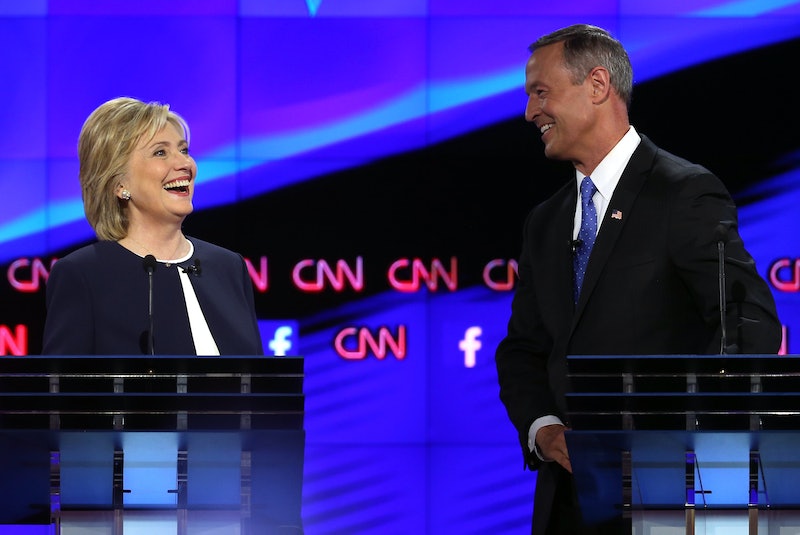 After an impressive debate showing by both candidates earlier this week, America was struck with an idea: could Martin O'Malley be Hillary Clinton's vice president if she wins the nomination? Obviously there's a while to go before vice presidential decisions need to be made, but, despite his good performance, it's unlikely that O'Malley will get to make that decision this election cycle.

Although decision time is still awhile away, the Clinton camp is already generating buzz about possibly selecting Julian Castro, the housing and urban development secretary. Castro, who officially endorsed Clinton after the debates, was praised by the former secretary of state, who said she would strongly consider Castro as her running mate if nominated.

It would be a smart alliance — Castro, a rising leader within the Hispanic community, would help bring in the Latino votes that Clinton has desperately been courting. But is there someone else already in the ring who might want the chance at a vice presidency?

Before the first primary debate, no one would have believed that O'Malley, the former Maryland governor, would be interested in the position. Much of his campaign rhetoric was focused on separating himself from Clinton, as well as questioning her positions. But a very different O'Malley was on the stage in Las Vegas earlier this week.

Instead of taking opportunities to grill her, O'Malley bypassed cheap shots and instead stuck to his campaign points. He was friendly and courteous to the frontrunner, and when directly given the opportunity to discuss her emails, he took the Sanders route and opted to discuss different issues instead.

A Clinton-O'Malley ticket wouldn't be too terrible of an idea. Despite his low polling numbers, O'Malley is a strong, youthful candidate. His current campaign problems stem from the fact that he picked a bad election cycle to run in — if he had thrown his hat in a ring that didn't include Clinton, he probably would have had a decent chance.

And the two candidates sit close enough to each other on the issues. Although O'Malley has distanced himself from Clinton, they are not so different that he couldn't comfortably come to her team without backtracking on previous statements. And they share some of the same passions — specifically a desire for tighter gun control, a subject that O'Malley has been particularly outspoken about.

There are, of course, several drawbacks to the idea. Although the pairing would do wonders for O'Malley's political career, there is very little that Clinton could gain from the alliance. O'Malley wouldn't bring an eighth of the voters that Castro could — even within his own state, O'Malley's numbers are poor. And a Clinton-Castro ticket would be truly historic: if elected, they would be the first female and the first Latino to achieve the highest offices in the land. And they would make a powerful statement to future campaigns, signaling that it was no longer necessary to have a white man on a ballot in order to get votes.

When compared to Castro, O'Malley's chances at the vice presidency look pretty slim. But he shouldn't give up hope just yet. We still have a long way to the primaries, and even if he loses this nomination, he can always try again.