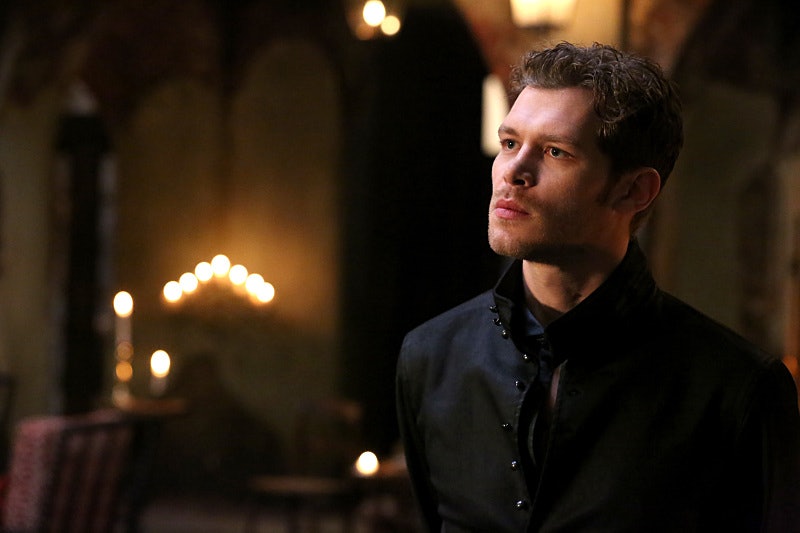 Klaus, Rebekah, and Elijah might not be as immortal as they thought, at least that's what a new prophecy on The Originals implies. First seen in The Originals' season 3 premiere, the prophecy showing the deaths of the Original vampires was confirmed in episode 2, "You Hung The Moon," when Freya used her magic to get the prophecy from Klaus' blood. "You have a terrible shadow over you, Rebekah too," Freya told Klaus and Elijah. "If this prophecy is fulfilled, you will all fall. One by friend, one by foe, and one by family." But, what does this prophecy mean for The Originals and our beloved Mikaelson family?

First things first, let's not get too crazy — there's no way all three of our favorite vampires can die in one season of The Originals. (That's just not how TV works, folks!) But, the prophecy is clearly going to motivate Klaus, Freya and Elijah throughout the season as they try to keep it from coming to fruition. Perhaps the most distressing fact told by the prophecy is that there is a way to kill an Original vampire, even though they believe the last of the white oak (previously known as the only substance that could kill an Original) is gone. So, either they were wrong about the white oak or there is another way, or substance, by which an Original can be killed. Immortality might be a thing of the past for every character on the show.

The prophecy also details how each of the three main family members would die, should it come true — "One by friend, one by foe, and one by family." This could literally mean anything. For a family line that stopped centuries ago, the Mikaelson family has an impressive way of expanding (Exhibit A: baby Hope), so whatever "family" meant to kill one of the Originals, it could be a character we haven't even met yet. As for the "friend" or "foe," considering just how long Klaus, Elijah and Rebekah have been around, it's likely they have at least a couple hundred of each, and that's underestimating it. If, however, we eliminate the possible killers only to characters thus far introduced in The Originals universe, my money's on newbie Aurora, Marcel (he's technically a friend now, right?) and baby Hope. Hear me out: a magical baby who is also a murderer. Who would see that coming?

Of course, nothing in The Originals is as it seems, and it's likely more of the prophecy will be revealed as the season moves forward. Still, the fact that only three members of the Original family are at risk in this prophecy begs the question: why Elijah, Klaus and Rebekah only? What about the other Mikaelsons (dead or soon-to-be revived)? I guess we'll have to wait and see!