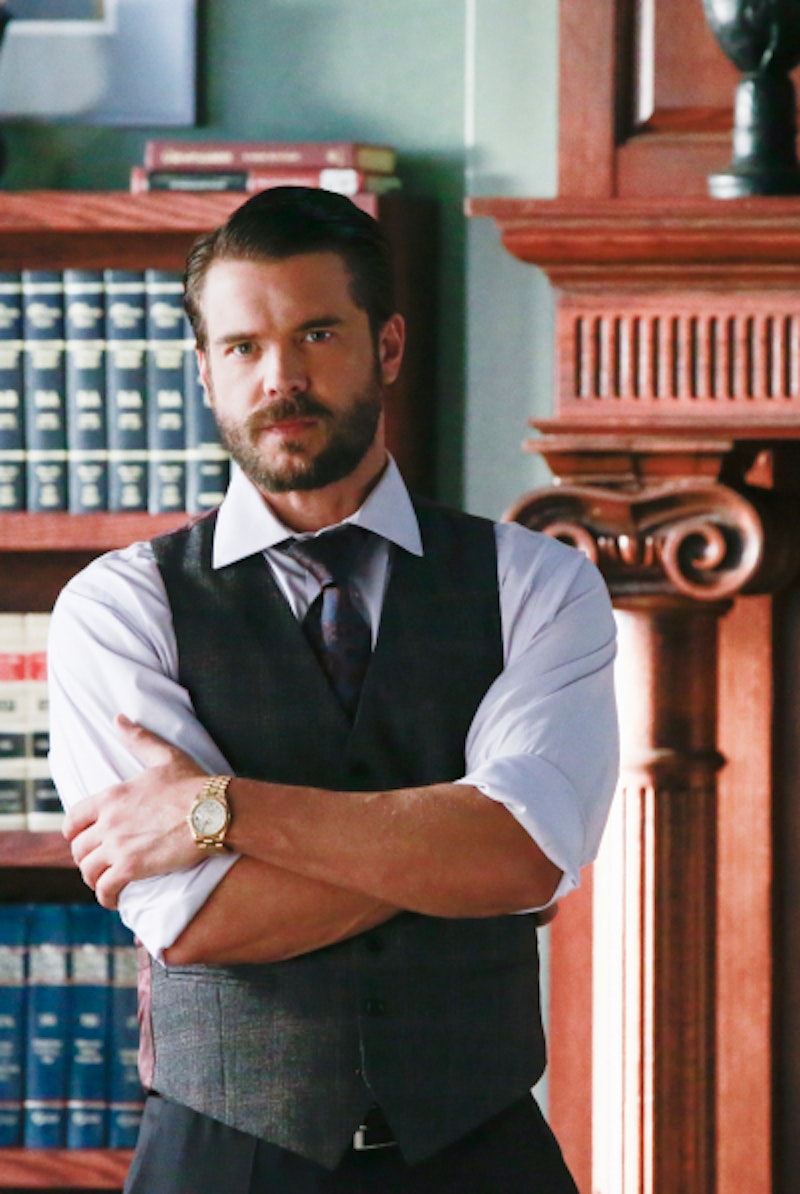 Sabrina and Bruno. Those two names probably didn't mean much to you before you started your TGIT, but after How to Get Away with Murder , Sabrina and Bruno have become the people of the evening. Who are they? As per usual, we don't really know that much about them. But, we do know that Sabrina and Bruno are probably involved with Rebecca's murder, even though we know that Bonnie was ultimately the one who killed her. We also know that they're connected to Frank, which means... fear them.

Bonnie killed Rebecca in the Season 1 finale for reasons that are still a little fuzzy to me. She felt that Rebecca posed a threat to Annalise and, also, I think Bonnie is a little unstable, so she suffocated Rebecca. Bonnie left Rebecca's body in the cellar for Annalise and Frank to find. Because Frank is the ultimate DIY-er — the real Mr. Fix-It — he took it upon himself to cover up Rebecca's murder. But, as the song goes, you get by with a little help from your friends. Frank couldn't do it alone, you guys. He needed to call some connections to finish the job, and that's where Sabrina and Bruno come in.

According to Levi, who tracked Frank's phone the night his foster sister went missing, Frank made three calls. One of them was to Sabrina. Who the hell is Sabrina? Well, turns out Sabrina went to high school with Frank, and her brother, Bruno, owns a cemetery. Convenient when you're looking to get rid of a body.

(Also, are we supposed to believe Frank is the kind of guy that keeps in touch with people from high school? Sorry, not buying that.)

Levi and Wes venture to Bruno's cemetery late at night, of course, because Levi is convinced that's where Rebecca is. Who knows if they'll find her there, but shame on Frank for not being more cautious. If Levi can figure out who you called, then you're slacking, man. No disrespect to Levi. All disrespect to Frank.

I'm sure this isn't the last we hear about Sabrina and Bruno. I'd, personally, like to put a face to the name, since all I'm picturing is Melissa Joan Hart and Sacha Baron Cohen. How involved were Sabrina and Bruno in the dumping of Rebecca's body? Were they involved at all, or was Frank just putting off the scent? Will I need to rescind my Kanye parody about disrespecting Frank? Tune in next week to hopefully get some answers.

More like this
15 Offensive AF Jokes In 'Friends' That Really Aren't OK
By Tolly Wright, Bustle Editors and Meguire Hennes
The BBC Is Adapting A Best-Selling Novel About A Mistaken Killer
By Darshita Goyal
Courteney Cox & Jennifer Aniston’s Latest 'Friends' Revival Is Everything
By Darshita Goyal
This House of the Dragon Character Will Create Another Scandal For Rhaenyra
By Kadin Burnett
Get Even More From Bustle — Sign Up For The Newsletter