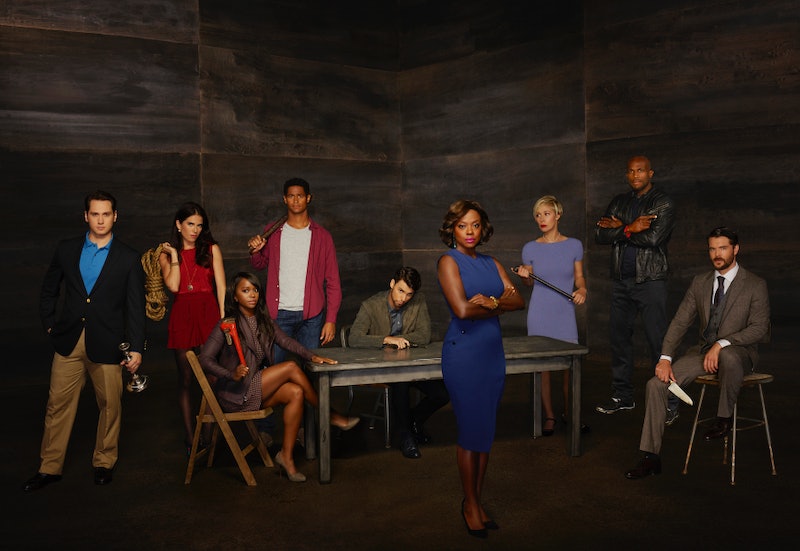 I have good news and bad news. The good news is that Annalise has been taken to the hospital, so she might live after all. The bad news is that How To Get Away With Murder is just as confusing as ever. The episode "Skanks Get Shanked" ended on a cliffhanger that left everyone wondering: What just happened on HTGAWM? Usually at the end of an episode there's a clear question to be asked: What's Eggs 911? Who is Tiffany? And so on. But, this week I was just WTF about everything. HGTAWM is delightfully complicated. Rest assured, though, it'll all make sense at some point. But, for now, here's what went down on Thursday:

Things started out simple enough. The case of the week dealt with a teenage girl who colluded with her friend to stab their other friend. Ring any bells? Yep, sounds like the Slender Man case. Other than that, the Keating 5 stayed focused on the siblings' murder case. Michaela tried to get info out of Caleb, and we learned that Catherine was a virgin, so they weren't incesting after all. (Although, pretty sure they ARE hiding something, and just copped to incest to hide the other illegal thing they were up to.) Oh, and Nate's wife asked Annalise to kill her because she has cancer and wants to stop suffering. But, Annalise doesn't go through with it. This isn't How To Get Away With Physician Assisted Suicide, after all.

Meanwhile Asher is trying to get that prosecutor off his back because she threatened to spill the Trotter Lake details regarding Tiffany. Info on what the hell happened there TBD. To do so, he agreed to testify against Annalise, who he thinks hired Frank to kill Sam. Bonnie finds this out, and confesses that she actually killed Sam. Which, as we all know, is a lie. But, Bonnie's super into protecting Annalise, and Asher's super into Bonnie, so maybe he won't rat out the (wrong) murderer now.

Over in Levi/Nate/Wes land, they're still trying to figure out what happened to Rebecca. Levi is pretty sure she's dead and tells Wes that Sabrina's brother Bruno works at a cemetery. Bruno happened to go to school with Frank. Frank called Sabrina three times the night Rebecca went missing. Levi put all this together and thinks Frank killed Rebecca and got Bruno to dump the body. Wes tells Nate this and Nate's all, "Why are you trusting Levi we don't even know him, what if he killed Rebecca?" Meanwhile absolutely no one suspects Bonnie of the murder.

OK, now the end because it was a doozy. It jumped forward to the mansion murder where Nate finds the kids and picks them up. Michaela gets a call and they force her to answer so that the person on the other line doesn't get suspicious. She tells the caller that "everything's fine" which is the biggest giveaway that things are wrong, but whatever. We're to assume the caller is her present-day BF Levi. But, we find out it's actually Caleb, one of the siblings. Michaela goes into his house and he asks her, "How is she?" And, Michaela answers, "Good."

Who are they talking about? Who knows! I bet it's not Annalise though, because I don't think Caleb is that invested in her, and if he planned her death with Michaela she would have said "dying" instead of "good." I think they were likely talking about his sister Catherine. After all, Michaela was just at the siblings' mansion. Perhaps Caleb sent Michaela there to check on his sister, and Michaela stumbled upon the crime scene and called her fellow murder buddies to help her. Also, I think Caleb and Michaela are dating in the future because it appears they're living together.

Whew, OK, I think that covers it. But, don't get too settled, because next week's episode has promised to be "insane" as if everything we've watched so far has made so much sense. Ah, the beauty of Shonda Rhimes' mind. So frustrating, but I gotta love it. Can't wait for next week!