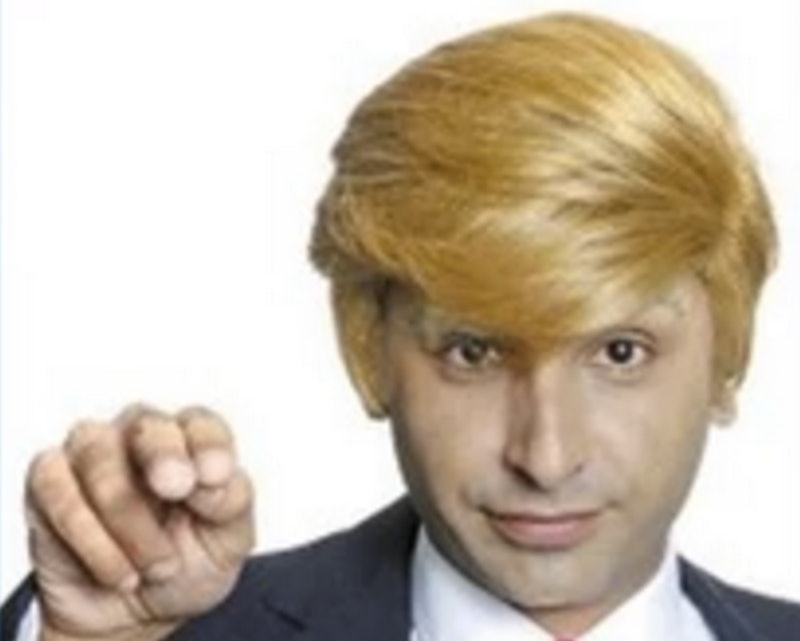 It's hard to deny that when the first season of the Apprentice aired — or maybe you only hopped aboard the Donald Trump prime-time television train when it turned into teams of former sort-of celebrities — you totally wished you could spend one day with Trump's full head of golden comb-over. Well, given that the Donald is well on his way to the White House (or a Republican nomination, at least), and Halloween is just days away, there's no excuse not to. I present to you a multitude of Trump wigs with which to steal the show at next weekend's costume party. Surely, there's one Donald Trump wig that will give you the just the right golden, windswept locks.

Getting to don the Donald hair (I think Trump himself would have gone for this pun, so it's OK to use here) for a night will only set you back between $20 to $30. And the memories you'll make while flat-out telling a vague acquaintance "You're fired" and simultaneously doing the cobra hand gesture will be priceless. And if you're one of those "don't feel like dressing up or putting together a real costume, but will experience too much FOMO if I skip the party" people, then don't worry — there's an option for you, too.

A pretty standard Donald wig. But I should stress the use of the word "Adult" in the product title, since you'd definitely be sporting some grays if you go with this option.

Is it just me, or is this one verging on Crayola's macaroni-n-cheese crayon color? The swooping comb-over is on point, though, so the "Donald T Boss" wig gets a thumbs-up.

This option seems way too dark to resemble Donald's do, but it deserved a spot based solely on the fact that the title included the word "Donald" three times, "wig" twice, and its plural version another two times for good measure. This seller took a course on SEO, I'm sure of it. And the Trumpster himself would be proud of that kind of business cleverness.

This wig is being marketed as a total steal, which is 100 percent accurate, considering it's the option that's most similar to Trump's actual head of hair. The color name being co-opted to officially describe both Donald's mane and this bargain wig? Lemon chiffon.

Not totally sure if this is even different from our first "Donald T Boss" wig, but this option is way more strawberry than blonde (at least, from the looks of the photo).

Going for both the Trump hair and already-classic "Make America Great Again" baseball cap is probably only for the most dedicated of Donald costume-wearers. But if you want to go all the way, pair one of the above wigs with the country's new favorite hat to keep that comb-over from blowing anywhere!

For those who just can't bear the thought of donning faux hair that basically involves a massive sweeping side bang for an entire Halloween eve, this cap is the best of both worlds!

Start out with any of options 1 through 5, and find a bottle of Garnier Super Stiff Gel. Next step? Go to town. Get that comb-over as high in the sky as you can, Alfalfa-style.

More like this
Bustle Daily Newsletter: November 24, 2022
By Hayley Schueneman
'Waterloo Road' Is Back, With More Than A Few Familiar Faces
By Sam Ramsden and Vivian Iroanya
This Luxe Cookware Is Beloved By Celebrity Chefs — And It’s Majorly Discounted For Black Friday
By BDG Commerce
This Ingenious Toilet Paper Has A Textured And A Smooth Side
By BDG Commerce
Get Even More From Bustle — Sign Up For The Newsletter