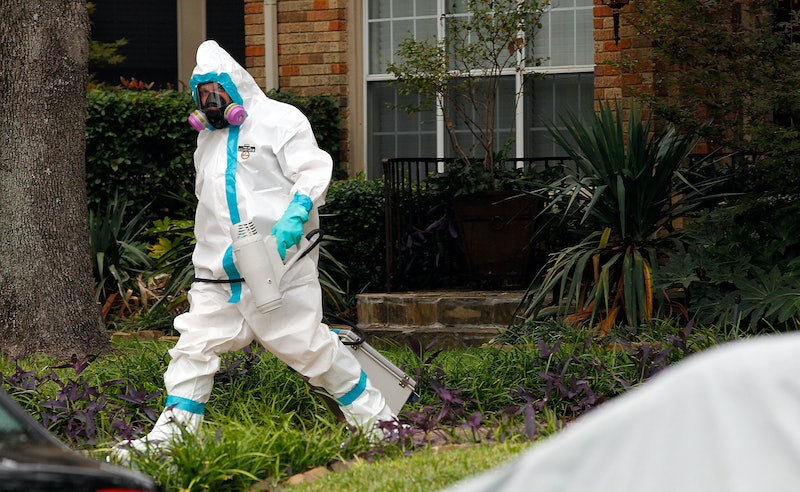 Look, I have plenty of friends who like to go the edgy route when they plan their costume — maybe something a little on the twisted side, or something completely creepy. The temptation to want to shock or have dark humor in a Halloween costume is great, but not if it leads down the path of plain old offensiveness and insensitivity. No, not Halloween costumes are okay. One suckt costume that ended being pretty popular last year was an "Ebola costume," where Halloweeners wore hazmat suits similar to those worn by the CDC or anyone treating Ebola patients. The Ebola epidemic killed 4,877 people; it's a serious disease and an awful way to die, so for Pete's sake do not wear an Ebola costume again this year.

First off, let's address the fact that making light of a genuinely horrifying and difficult to treat disease is just asshole behavior (hey, I call it like I see it). If we want to talk about something that's actually scary, let's have a quick run down of what it's like to die from Ebola. The National Institute of Health, early symptoms of the disease include a high fever, rash, diarrhea, vomiting, muscle pain, sore throat, and so on. The late symptoms of Ebola? All of the above plus organ failure, and bleeding from the mouth, rectum, eyes, ears, and nose. Not so clever or edgy, huh?

Even worse was that last year some people opted for a "sexy" Ebola costume... I'll again refer to the list of horrible and often life-ending symptoms listed above and ask us to have a collective think about how anyone could ever associate the word "sexy" with Ebola in any way. And as for the fact that these costumes are all hazmat suits meant to depict medical professionals who were treating patients in 2014 during the worst Ebola outbreak in recorded history (yep, that's what everyone was making light of), these people put their lives at risk to help save the lives of others who were already suffering from an extremely painful disease. Come on, people.

So if you want to do something edgy this year, take the extra couple of seconds to think about what it is you're representing, and if it's really appropriate to portray. If you want dark or edgy, do something that makes fun of Trump or the Kardashians, or just honestly dress up as a ghost using a sheet you threw over your head. Anything other than mocking the suffering of others. I promise you it won't be hard to come up with something great.