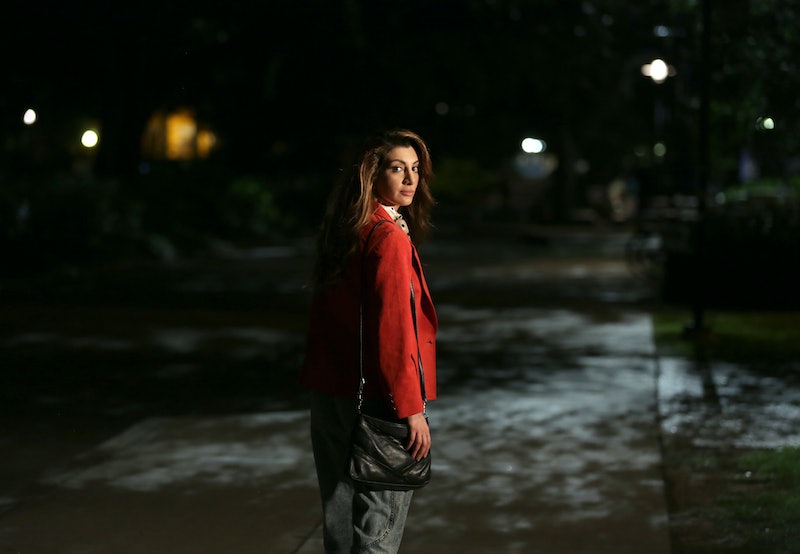 I love a good '90s throwback. So you would think that I liked Gigi on Scream Queens, the eternal '90s girl. Well, I do like her, but I like her a lot less now that we know that Gigi is working with the Red Devil. GASP. I've known Gigi was up to something in the past few episodes (national consultants for sororities are annoying, but they're not this annoying), but I never thought Gigi would be rubbing elbows — nay — controlling the Red Devil like a HBIC. I really didn't see that coming. What's next? You're going to tell me *NSYNC is never going to get back together?

Our Gigi developments have been unfolding handsomely since the haunted house episode of Scream Queens. We learned that Gigi is the wailing "old hag lady," who probably took care of the bathtub baby after her birth. Either that, or Gigi just really likes dolls, dark hooded robes, and creepy haunted houses filled with dead bodies. We don't know why she would be the wailing lady, but it could line up with the fact that Gigi had something traumatic happen to her in the '90s, permanently affixing her brain into that time period.

She Is Seeking Revenge On Those Who Killed Her Sorority Sister

If Gigi is scarred from the night that the Kappa sister died in the tub, she may blame Dean Munsch or Kappa Kappa Tau and want to seek revenge. Can you blame her for wanting to get back at Dean Muncsh? She forced sorority sisters to bury their friend who just died.

She Wants To Get Close To Grace

Did anyone catch when Gigi called Grace her stepdaughter and herself the stepmother? If Grace is the bathtub baby, and Gigi did care for Grace when she was born, maybe this is Gigi's weird and unstable way of spending more time with her.

She Is The Campus Pride Sponsor

Plot twist! What if that Red Devil Gigi met with was just the Red Devil mascot? We know that those Red Devil costumes are being given out freely, so who knows the amount of people with access to them.

Gigi's involvement with the Red Devil will hopefully unfold sooner rather than later. But for now, definitely be skeptical of Gigi. Be very skeptical.