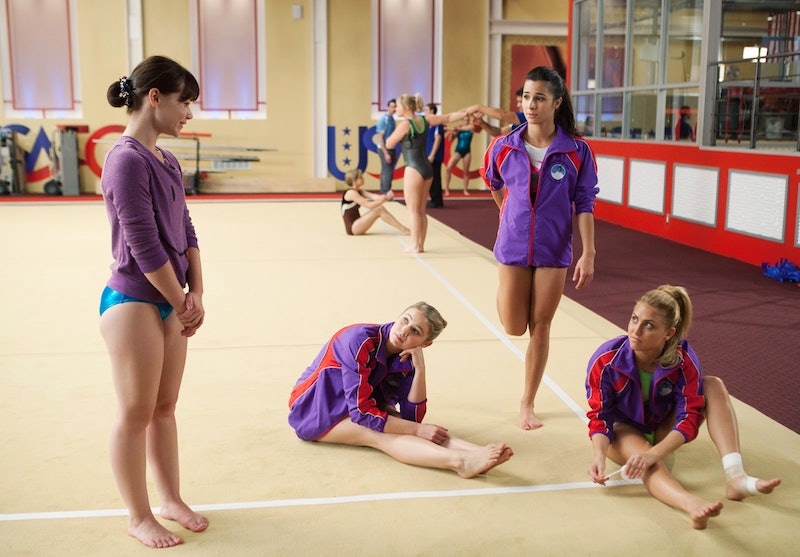 There have been a lot of changes in the world of gymnastics since I was a part of it. There's a new scoring system, that I think we can all agree is confusing as hell. But apart from that, we still have love for Marta and Bela Karolyi, and hang on to our seats to see who the next Nadia Comaneci will be. And while we haven't found her yet, we've instead seen Shawn Johnson, Carly Patterson, Nastia Liukin, and Aly Raisman all turn up. And while those of us who have retired (this chick) have been out of the game for a while, we still appreciate every day we're not peeling rips off of our hands, and going home to nurse an ankle before the meet tomorrow.

And speaking of meets, I personally am pretty stoked that I don't have to grease my hair back into oblivion to compete. There's nothing worse than panicking about a flyaway, a showing bra strap, or the silent score killer: toe nail polish.

So whether you’re retired, or still in the thick of it and working on your front walkover on beam, you’ll recognize these bizarre phrases well. (And they’ll either make you shudder, or make you nostalgic AF.) Here are 10 weird phrases all gymnasts will understand:

You know how we re-appropriated the phrase "Hail Mary pass" to have a meaning beyond football? Well, for gymnasts, "stuck the landing" is the only re-appropriated phrased we got, and we're holding it near and dear to our hearts.

Unless you were a competitive gymnast you know nothing about wrist support requirements, or the pain that comes with breaking in your wrist supports.

Most people think that's a flavor of ice cream that involves chocolate and vanilla. It's not.

Not creatures that live in the woods. Instead, it's this really nifty thing where you go round and round on a bar and hope to God you don't die. (Or at least, that's how it is when you're training for them.)

Even if you've been retired from gymnastics for 20 years, that word still makes you cringe. Did anyone actually have fun working on their abs so they could get their kip? No? OK.

6. A Mustafina, Or A Shaposhnikova

On rare occasion, if you perfect a skill that hasn't been done before, they'll name it after you. It's a beautiful thing.

That would be the 1996 team that lead the USA to GLORY at the Olympics.

Just saying "leotards" hasn't been a thing since the '80s.

Translation: Go coat your grips the perfect amount so that you won't slip off the bar, but won't get stuck on the high bar either. Do so while inhaling concerning amounts of chalk dust. (I'll let you know just how permanent the effects on your brain are sometime in 2070.)