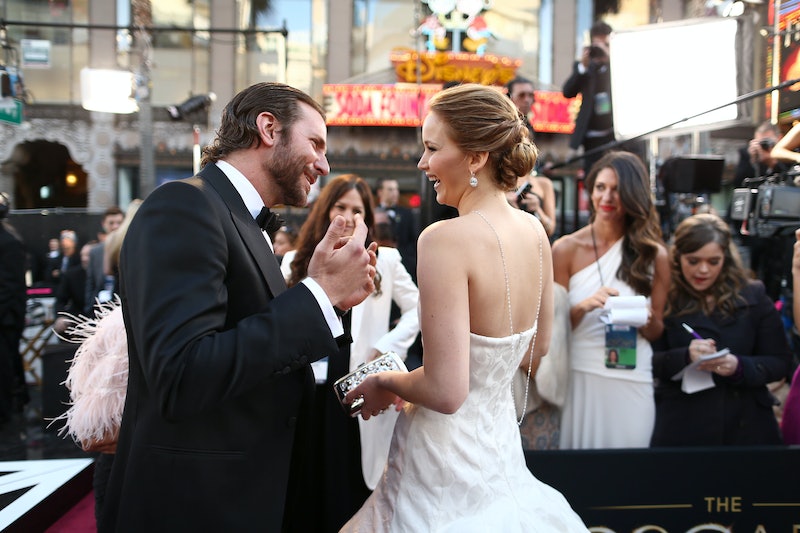 Earlier this week, actress/the girl everyone wants as their BFF Jennifer Lawrence spoke out against the gender pay gap in Hollywood on fellow actress' Lena Dunham's site Lenny — and, in response, she thankfully received a ton of support from her fellow, fierce, female actresses. However, they aren't the only ones speaking up in support of the Hunger Games actress up on this topic: J. Law's frequent costar Bradley Cooper also supported Lawrence in the fight against the very clear the gender pay gap in Hollywood.

As Lawrence stated in her piece, it was the Sony hack — which leaked a massive amount of confidential material from the company to the public, including emails regarding the salaries of some of Hollywood's highest-paid actors and actresses — that showed her the extent of Hollywood's pay gap. In regards to this discovery, Cooper spoke up saying that Lawrence's pay was "embarrassing," and that she basically earned "nothing" for all of the hard work she put in.

In her essay on Lenny, Lawrence detailed why she had been afraid to speak up and demand what she wants in the past:

But if I’m honest with myself, I would be lying if I didn’t say there was an element of wanting to be liked that influenced my decision to close the deal without a real fight. I didn’t want to seem “difficult” or “spoiled.” At the time, that seemed like a fine idea, until I saw the payroll on the Internet and realized every man I was working with definitely didn’t worry about being “difficult” or “spoiled.”

Sigh. Hollywood's pay gap is no secret, but it's still alarming to see the true extent of it. Even though women in the entertainment industry put in just as much work as their male counterparts, it still often fails to show in their paychecks. Few men have spoken up to do something about this disparity, but hopefully, Lawrence's words inspire other actors like Cooper to stand up against it as well.

It was in a recent interview with Reuters that the Silver Linings Playbook actor spoke out about the pay gap — and how to fix it. "Usually you don't talk about the financial stuff, you have people...but you know what? It's time to start doing that."

You know what? He is 100 percent right: The only way things can ever change is if actresses like Lawrence get people talking in order to change things around. There are tons of reasons why Bradley Cooper is right to stand by his colleague, but if I went through them, this article would be never ending. So here are a few:

Once one person takes the initiative to make a change, it is often easier to get others to hop on the train as well. By saying that he agrees the gender pay gap is wrong and by also showing that he is going to do his part to help change things, Cooper is adding walk to his talk. Once Lawrence and Cooper's fellow actors see them taking this step toward promoting pay equality, others might decide to do the same.

Being An Actor Is Not Easy

Being an actor is no easy task. Thankfully, Cooper realizes that, and is appreciative and understanding of the hard work and long hours that his costar Lawrence puts in to her roles. As he told Reuters in the same interview: "She worked everyday[sic] on that movie and got paid nothing. It's really horrible actually, it's almost embarrassing." This suggests Cooper clearly believes that the women of the entertainment industry deserve more than they are earning.

By showing his support for J. Law, Cooper is also voicing his support for the other talented women of the entertainment industry. In his interview, he stated that Amy Adams "should have been paid more than everybody" for her work on American Hustle. He also shared his hopes that J. Law's essay will "allow people like Amy to also speak up." In his interview, Cooper said that he's begun teaming up with female costars to negotiate their salaries on films in hopes it will spark a change. "I don't know where it's changing otherwise, but that's something that I could do."

Hey: One step is better than zero. Thanks to actresses and actors like J. Law and Cooper, we could be making steps toward finally closing the gender pay gap.

More like this
Remember When Benedict Cumberbatch Announced His Engagement In A Newspaper Ad?
By Hugh McIntyre
Tom Cruise Gives His Honest Review Of Lady Gaga’s New Song For 'Top Gun: Maverick'
By Hugh McIntyre
Harry Styles Called For "Backlash" In Powerful Statement On Abortion Rights
By El Hunt
Sandra Bullock, Girlboss Extraordinaire
By Matt Harkins & Viviana Olen
Get Even More From Bustle — Sign Up For The Newsletter