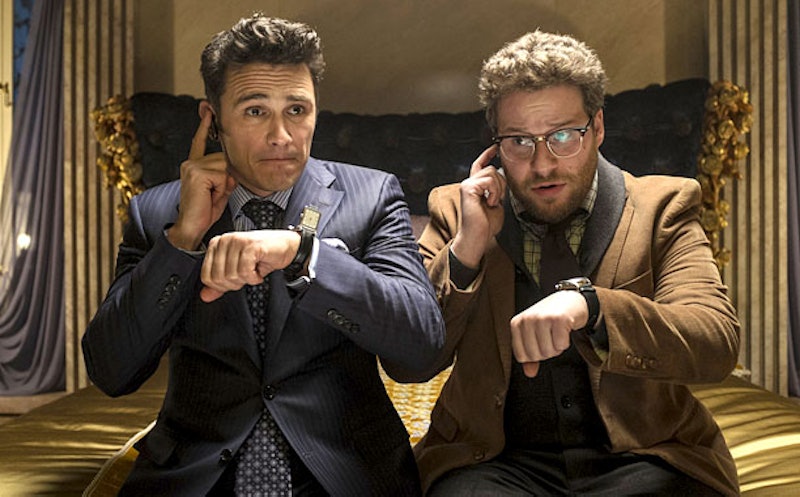 The hacking of Sony is considered one of the biggest in recent history. Everything from unreleased films, to employee details, to celebrity social security numbers have been leaked onto the Internet. Sony has even pointed the finger to North Korea, wondering if they were hacked because their movie The Interview depicts an assassination attempt of North Korean leader Kim Jong-un. But some people on the Internet have a different theory: The Sony hack is nothing more than a marketing attempt for The Interview. Although it's an interesting suggestion, there are so many reasons why this would be the most foolish promotional tool in recent film history.

It seems that in general James Franco's films are subject to this sort of speculation because a similar thing happened back when Palo Alto was coming out. It was right around the time his thirsty Instagram conversation with a 17-year-old hit the Internet and some wondered if it wasn't a marketing tool for his movie about a May-December romance.

But although that promotion could only mess with Franco's reputation, the Sony hack has affected so much more than just one person. To have it all be a marketing technique would be really lame, and totally stupid.

Here are four major reasons why I think the hack is legit and not a promotion for a pretty average-looking movie.

The hack originally leaked several Sony films that had yet to premiere or were still in theaters. Brad Pitt's Fury was immediately downloaded over two million times and the unreleased Annie was downloaded 200,000 times. Granted the hack and its possible North Korean ties brought awareness to The Interview, but Sony lost millions of viewers of Fury, Annie, and several other films. Is that trade-off worth it? I don't think so.

Threatening Employees is Way Below the Belt

The hackers recently sent a letter to several Sony employees threatening their safety and that of their families if they remained loyal to the company. That's a line no promotion should ever cross; violent threats just aren't funny.

Many actors saw their social security numbers, phone numbers, and pseudonyms among the information that was leaked. Now those celebrities can no longer use those fake names to travel in safety. They have to go through the hassle of coming up with new names now and getting new phone numbers. Ultimately this hassle could make them not want to work with Sony again in the future.

Dragging North Korea Into Anything for Fun is a Bad Idea

North Korea doesn't have a sense of humor so accusing them of hacking Sony if it was really all a joke is a really bad idea. Movie studios shouldn't mess with foreign policy.

So yeah, maybe this is all just a joke to get people talking about The Interview. But if that were true, it would be a pretty low blow for Sony to sacrifice all that just to promote a film. Sorry James Franco, but no movie is worth that much effort.