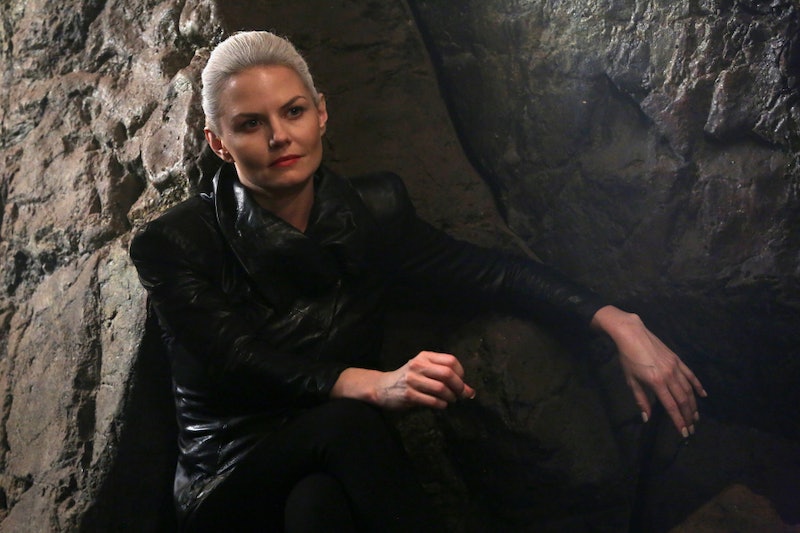 We're only three episodes into Once Upon A Time Season 5 and already things are Really Bad — or at least they're headed that way quickly. It's hard to say, what with all the jumping back and forth between Storybrooke in the present and Camelot during the six weeks Emma as the new Dark One has erased from everyone's memories. One thing's for sure: Emma has embraced the Darkness because in at least one way, someone she loves — my guess is Regina, but that's probably just my Swan Queen 'shipper showing — let her down and didn't keep her in the light. That doesn't mean that all is lost, of course; Emma will eventually be restored to her former Savior self, but the journey to get there is going to be long and arduous. Oh yeah, and people are going to die on Once this season — but who?

Sitting in the Entertainment Weekly Hot Seat on Friday, executive producers Eddy Kitsis and Adam Horowitz were asked if anyone was going to lose their life this season, to which Kitsis replied rather nonchalantly (can you be nonchalant in print?), "Absolutely. People die." Yikes! But also, YESSSSS! The question is, who's going to lose their lives and how's it all going to go down? It's an exciting prospect to think about, as messed up as that sounds (as long as you don't touch Regina).

It's still early days for Emma as the new Dark One, and we all know that the Dark One's propensity for evil deeds increases over time. Presently, Emma's dark, but she's not THAT dark. Sure, she casted a curse that erased everyone's memories and shot them back to Storybrooke, but we still don't know why she did it. What happened in Camelot that she doesn't want them to remember, and if she wants the guilty party or parties to pay for what they've done, how can they truly be punished if they don't even know what they did? None of it makes any sense, but that's something we'll have to wait several more episodes to discover — my prediction is around the mid-season finale.

Of course, we know that someone (or more than one person) is going to have to die. It's safe to assume that none of the main characters will make an exit, so that rules out the likes of Regina, Snow, Charming, Henry, or Hook. However, there are plenty of background players that might feel the Dark One's wrath. After all, we saw how quickly she was able to turn one of the dwarves to stone — it's hard to imagine she'd have a hard time ending a few lives moving forward.

I think it's unlikely that Emma will be saved before the end of the season, which means between now and then, things are going to get a whole lot worse before they get any better.