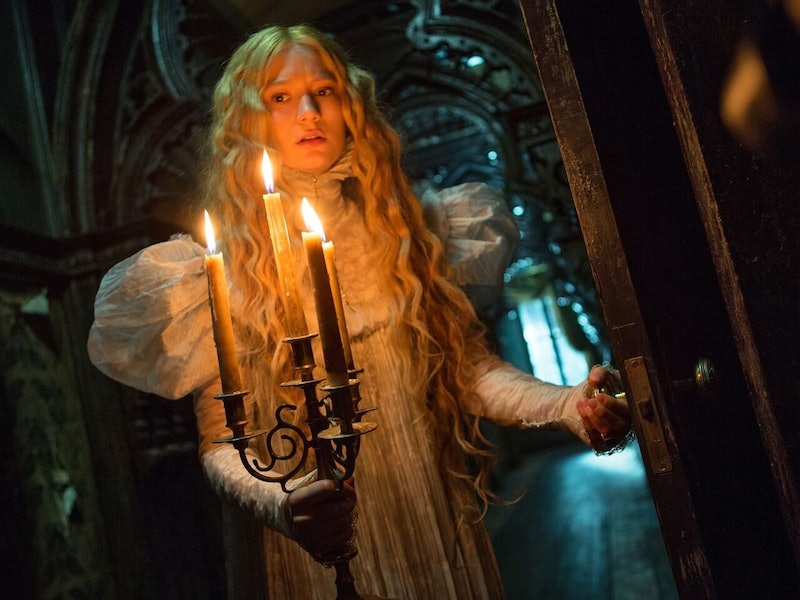 If you ran to the theaters to see Guillermo del Toro's latest gothic horror film, Crimson Peak Friday, you might have been terrified, amused, and then subsequently able to shrug off the scares present within the flick as pure fiction. However, sorry to say, you shouldn't be so quick to shrug it off, because Crimson Peak might be rooted in more truth than you'd think. Sure, it's a fantastical premise, complete with ghosts and supernatural beings — but according to director Del Toro during a press conference for the film, there is a real story behind all of the supernatural. So, is Crimson Peak based on a true story?

Cinemablend reports that during a press conference for the film, Del Toro retold a ghost story from his mother's childhood while discussing inspiration for the film's creation. The director said, "the opening scene is based on a visitation that my mother experienced. My mother's grandmother died, and when she was a child she was crying in her bed, and she heard the silk of the dress of her grandmother move in the corridor. She smelt her perfume, and she heard the bed springs creak and felt the weight of her grandmother leaning on her back. She jumped up screaming and left the room."

Sound familiar? (Also, raise your hand if you just got chills.) This specific story mimics almost exactly what transpires in the opening scene of Crimson Peak — and even if you haven't seen the film yet, you might recognize that particular narrative through the numerous trailers and ads released for the film.

Whether or not you believe this story, you have to hand it to Del Toro: He knows how to craft unforgettable films, and his particular sensibility for the supernatural lends itself well to the genre (in the sense that it defies most of the genre's pre-conceived barriers). Mixing aspects of personal experiences and history against the idea of dark fantasy proves to be working for Del Toro, so I guess if it ain't broke, don't fix it.

And, if the following films are any indication, Del Toro's masterful ability to weave truth and fiction doesn't seem like it will wane any time soon. Here are a few of Del Toro's previous films that are based on some semblance of reality, even though they too involve the supernatural.

Del Toro might best be known for his work as writer/director on the three-time Oscar winning, genre-bending Pan's Labyrinth. The film, which is a combination of fantasy, science fiction and war drama, follows the mind of an eleven year old girl as she makes sense of the real-life horrors in a 1944 Spain. Visionary, horrific, and compelling might be three adjectives used to describe the narrative labyrinth of Pan's Labyrinth. What makes it so unforgettable however, rests in Del Toro's ability to blur the line between the brutality of fantasy and the brutality of fiction. With the Spanish Civil War as a backdrop, fascists, sadism, and violent uprisings anchor the film's fairy tale elements. Pan's Labyrinth is, if nothing else, an exercise in the tragedy of real life through the lens of the fantastical.

The Devil's Backbone was five years behind Pan's Labyrinth, but again, it takes place during the Spanish Civil War. By default then, this one's rooted in some historical accuracy as well: Fascists are in control of Spain, and because of this, much of the film's symbols parallel the politics of the time, which works to ground the story — even when ghosts are at the forefront of the plot.

Set in 14th century Spain, Cronos is one of del Toro's most loyal "horror" films — but that's not to say it's without profound humanity. Like most del Toro films, the undercurrent of tragedy and sadness works to anchor the odd and often times gruesome story at play here. The premise revolves around an antique dealer discovering a kind of mechanism that latches onto his skin and makes him immortal. The film is not without it's own set of reality, though it might be more oblique than the kind present in his previous works: There are obvious references to religion, as seen through the character's names (Jesus, Angel), but most of all it's the humane portrait of an immortal monster that keeps this film structured.

Del Toro's greatest strengths as a storyteller — his ability to weave the horrors of reality into his, at times, horrific fiction — make Crimson Peak a film worth seeing. Whether or not it's based on a true story doesn't really matter, because like del Toro's previous work, there's nothing more truthful than the humanity at the center of it all.