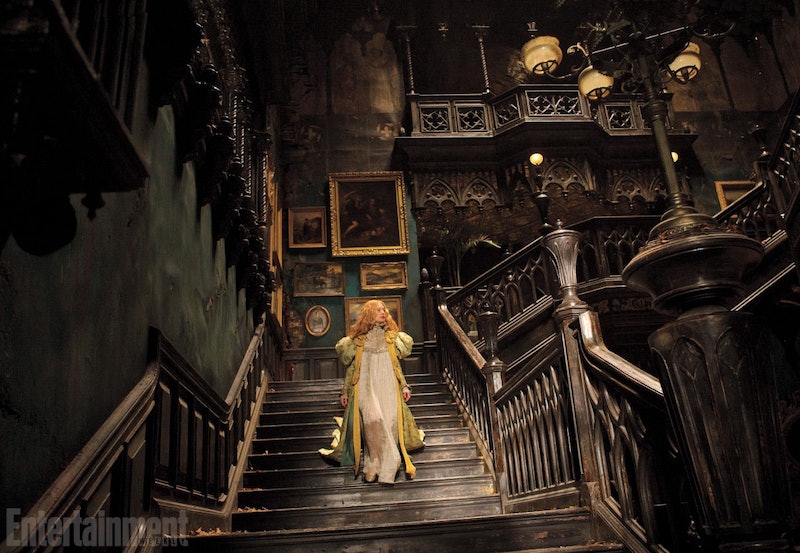 Upon first look, it seems obvious that the title of the new film Crimson Peak is a reference to the haunted mansion that appears to be the center of the movie. Crimson Peak, after all, tells the story of a young woman, Edith (Mia Wasikowska), who marries a mysterious stranger, Thomas Sharpe (Tom Hiddleston), and finds herself whisked away to Thomas' old family home, the Sharpe mansion, where they live with his cold sister, Lucille (Jessica Chastain). There, Edith finds that her new home is not as inviting or innocent as it may appear; in fact, it seems rather apparent that the house is haunted by ghosts. Given that fact, it seems like a safe assumption that the title of "Crimson Peak" means a reference to the Sharpe family home. But, a quick shot in one of the film's trailers establishes the Sharpe mansion as being called Allerdale Hall. So what gives?

If Crimson Peak is not, in fact, a reference to the home inhabited by the Sharpe family, then perhaps the the Hall is only one part of the house — the livable parts — and "Crimson Peak" refers to the estate in its entirety. Or, it could be the name of the mountain atop which Allerdale Hall sits. This seems more likely, as the haunted house is described in a featurette as being situated "atop a mountain of blood-red clay." And in the film's trailer, a ghostly voice whispers, "Beware of Crimson Peak." So "Crimson Peak," then, must be the supernatural epicenter of this particular ghost story.

In a special behind-the-scenes featurette on the red clay, Crimson Peak director Guillermo del Toro revealed that the red clay mine hidden underneath Allerdale Hall "holds the most secrets." Said the filmmaker, "It's the gut of the house. It's the place where the most emotional, and violent confrontations are going to take place."

So, Crimson Peak the film is likely named after "Crimson Peak" the place depicted in the film, but another explanation could have a much sexier meaning. Crimson Peak has been billed as del Toro's most sexual horror film to date, with del Toro telling reporters visiting the set that the film was "kinky," according to the LA Times. That said, del Toro is adamant that any sexual undertones in the film remain subtle. "It's really a movie that is traditionally gothic romance, but it has two or three violent moments that are very violent. And one or two little sexual things that are more overt than gothic romance normally is," del Toro told the paper.

Tom Hiddleston also hinted at the sexy moments in Crimson Peak in an interview with Yahoo!, admitting that the film "begins with romance, but progresses to kink." And, the actor is said to have a sex scene in the film. So could Crimson Peak then refer to something a bit more... kinky? Perhaps a peak of pleasure or pain? The phrase "crimson peak" has no definitions when searched on Urban Dictionary, but something tells me that will change once Crimson Peak hits theaters on Oct. 16.