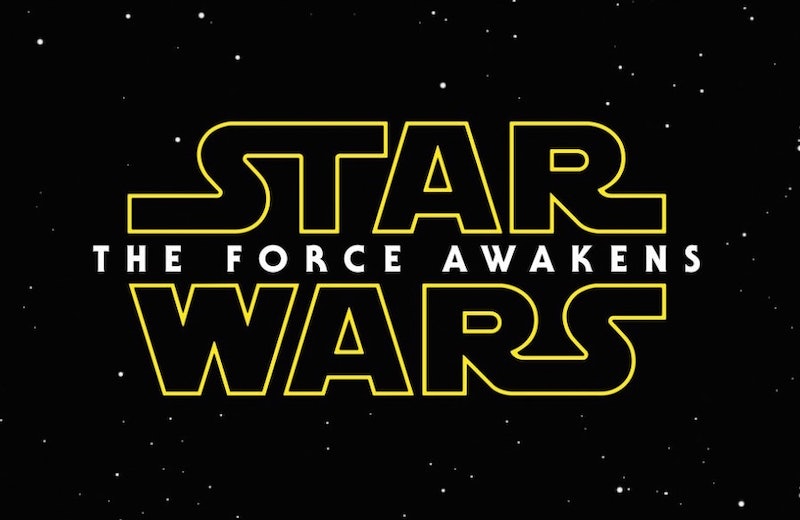 It is a great day for all Star Wars fans. The franchise just released two big pieces of news: On Sunday, the new Star Wars: The Force Awakens poster was released on Twitter, and that same social media account also revealed that the new trailer for the movie would air during ESPN's Monday Night Football. While fans all wait with baited breath for that trailer — ESPN is likely to get more viewership than ever before on a New York Giants vs. Philadelphia Eagles game — we can all at least enjoy the poster, which features both the characters that Star Wars fans already love and those who have been introduced to over the last several months. But what does the new Star Wars poster indicate about the upcoming film?

Unfortunately, it doesn't actually reveal too much — or really, any — information about the plot. But that was to be expected, considering how tight-lipped every single member of the Star Wars: The Force Awakens team has been since the film's initial announcement. But there is one big thing worth noting: the similar style the poster has to other Star Wars film posters from the franchise. The Star Wars team certainly enjoys putting characters in a vertical position down a poster to pull the eye into the middle. In this new poster, fans also get to see old favorites, like Han Solo, Princess Leia, Chewbacca, C-3PO, and R2-D2 back in action, though surprisingly Luke Skywalker does not make an appearance. It is known, however, that Mark Hamill, who plays Skywalker, is in the film and that it takes place 30 years or so after the events of Episode 6: Return of the Jedi. The film will bring a new threat in the form of Adam Driver's Kylo Ren, and the new "First Order." Speaking of Driver's new character, he certainly dominates most of the poster.

And he's not the only one. John Boyega's character Finn and Daisy Ridley's character Rey also take up a majority of the poster. Are fans to assume that Kylo Ren's biggest threats to his evil plan will be Finn and Rey, despite the fact that Finn is a legitimate stormtrooper and not a rebel in a stormtrooper disguise as many (including myself) probably believed when the first teaser for Star Wars: The Force Awakens was released?

That's not the only question the poster raises. Oscar Isaac's Poe Dameron doesn't get much space on the poster, which is interesting considering he's decked out in his X-Wing pilot gear and supposedly shares a major plot with Princess Leia. Then we have Gwendolyn Christie's Captain Phasma at the bottom of the poster in all her metallic, evil beauty. She's got an army of Stormtroopers on either side of her, which could mean that she is the leader of the First Order and has her own nefarious plans that may or may not coincide with Kylo Ren.

This poster is truly exciting, and not just because of how many characters it features, but also because it's one of the first big glimpses fans have gotten of the movie (it's a lot better than just a title card). Sure, no one can determine much from the plot of the film through the poster, but who cares? What people want to see is the return of characters we love, action, and intensity. And fans get all of that in one major poster.

Now all fans like myself can do is just hope that the trailer will help us understand parts of the poster that are still a bit foreign. I know I'm hoping for some Captain Phasma and Kylo Ren action from the trailer; this poster is making me practically beg for more information about the new villains. Yet whatever the trailer shows, at least there is this poster fans can look at and continue to analyze for days and months until Star Wars: The Force Awakens gets released on December 17.