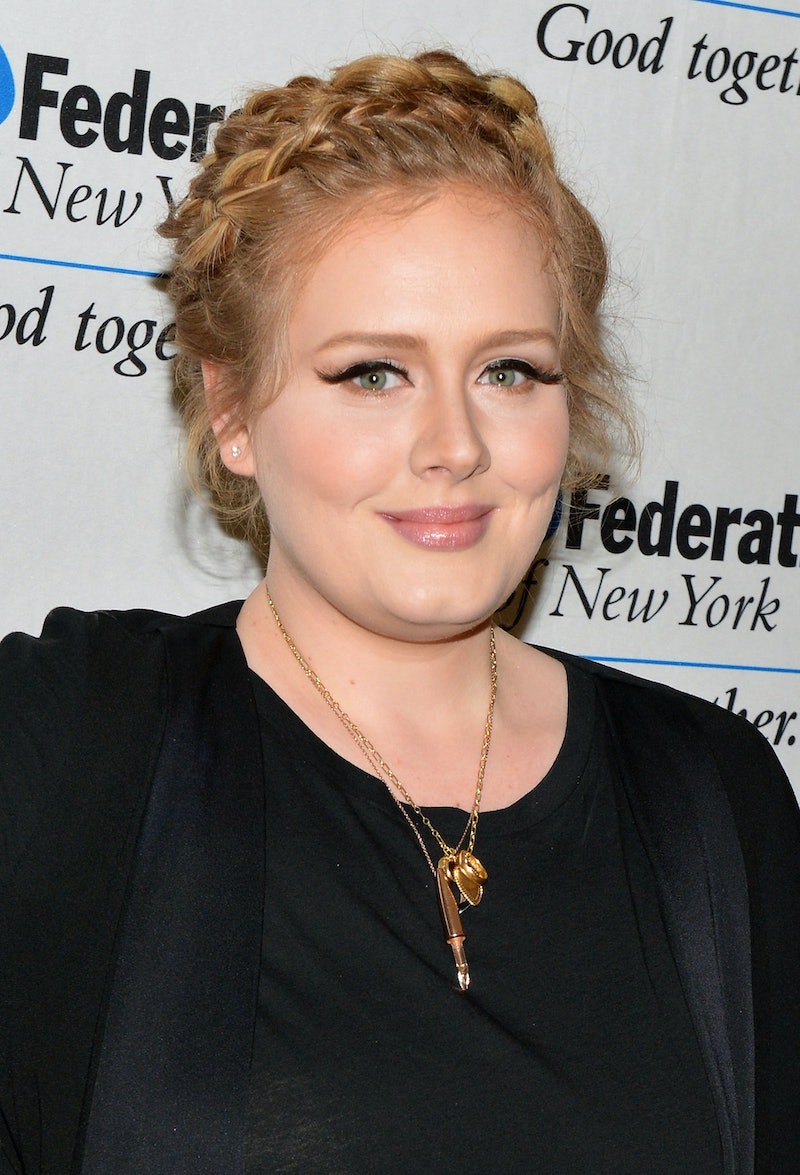 If you're anything like me, you've been waiting with bated breath for new music from Adele. I was a massive fan of 19 and an even bigger fan of 21. I still know every word to every song and they all give me life. And while I totally understand her desire to take a long, well-deserved break to live a regular life and start a family, I'm desperate for new music from arguably the best singer of her generation. Thankfully, it seems like I won't have to wait much longer, because Adele totally just teased a new song during the commercial break of The X Factor UK, and it sounds absolutely incredible.

Update: Producer Ryan Tedder, who has previously worked with the singer, seemingly confirmed that the ad in question is indeed Adele by posting a tweet that simply said, "Adele :)

You'd have only had to blink to miss it — the ad was only about 30 seconds long, and featured a singer's incredible voice that sounded uncannily like Adele singing a piano ballad while the black screen displayed the lyrics of the song. At the end, three white dots spread across the screen, and just like that, the commercial was over and Adele was gone. What does it all mean and why did Adele choose to reveal her new music to us this way? Of course, there's no better opportunity to get your music out to more people than during primetime TV, but refraining from adding her name or any identifying info to the ad seems crazy, even if it did ultimately create even more of a craze.

With such a short clip to go off, it's hard to determine what Adele's new album — which is rumored to be dropping on Nov. 20 — will sound like, but what viewers did hear of the new song does sound like classic Adele, just with a voice that's gained even more depth and maturity in the time she's been away.

I was wondering if after all these years

They say that time's supposed to heal ya

but I ain't done much healing

If we really want to read into things, it's been several years since fans have seen or heard from Adele, and I think it's safe to say we're desperate to "meet" her again via new songs to hear about everything that's happened and what heartbreak she's encountered despite how happy her life has seemed. No one does heartbreak better than Adele, and if anything, her fans are just going to be even more excited now that we've been allowed to hear a tiny snippet of what she's been working on. I know I can't wait.

Twitter seems just as convinced as I am that the clip was indeed Adele, so I'm sticking with it and trying to contain my fangirling. Note: It's not working.

More like this
Fans Think Adele & Rich Paul Have Bought Their First Home Together
By Sam Ramsden
Stormi Just Walked A Red Carpet With Mommy Kylie Jenner & Daddy Travis Scott
By Hugh McIntyre
Is Megan Fox Pregnant? MGK Gave A Shout-Out To Their “Unborn Child” Onstage
By Hugh McIntyre
Britney Spears Thanks Fans After Miscarriage & Explains Why She's Writing A Book
By Jake Viswanath
Get Even More From Bustle — Sign Up For The Newsletter