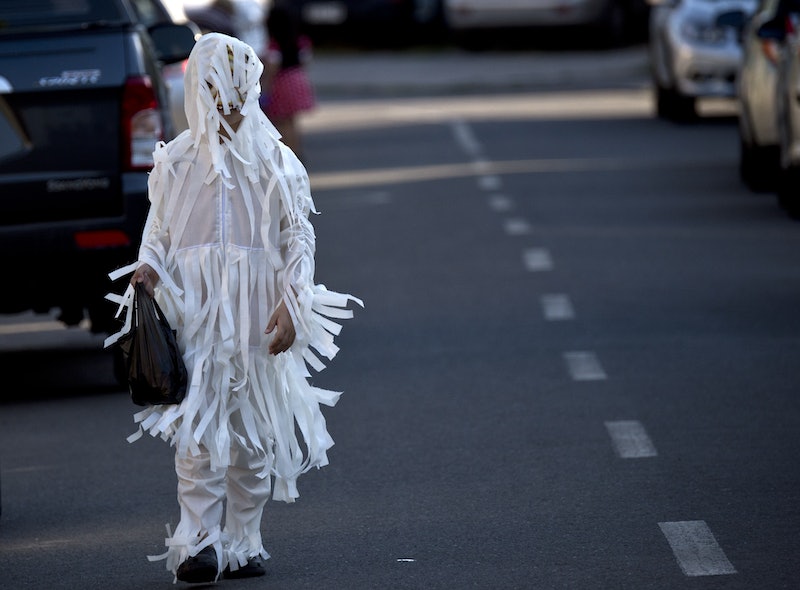 Every October, there are some people (me) who get overwhelmed by the variety of Halloween costumes out there (it's me) and inevitably end up as sexy Iron Man for the fourth year in a row (I'm talking about me). If this situation sounds familiar, may I direct your attention to Jeff Wysaski's fake Halloween costume suggestions? They won't help you make a decision, but they're a hilariously amazing distraction before you return to your regularly scheduled Halloween freak-out.

The comedian and prankster behind the website Obvious Plant has a history of leaving shopping tips in public spaces for unsuspecting customers, but he's truly outdone himself with this one. Wysaski trolled Halloween store shoppers with fake costume labels like "Man Stuck at Mall with Wife" and "Cold Girlfriend" — and the latter is complete with two cups so it looks like you're holding your fake boyfriend's drink. It's perfect for fending off men, which is all I've ever wanted in a costume. Personally, I'm also partial to "Sexy Potato," which Wysaski suggests we accessorize with a cute pair of heels, butter, and some sour cream. I'm not saying that I'm going to show up as a sexy vegetable this Halloween, but I'm not not saying that.

Now that is some sexy starch.

Check out a few of the images below, and for more from Wysaski, head over to Obvious Plant's Facebook or Tumblr.