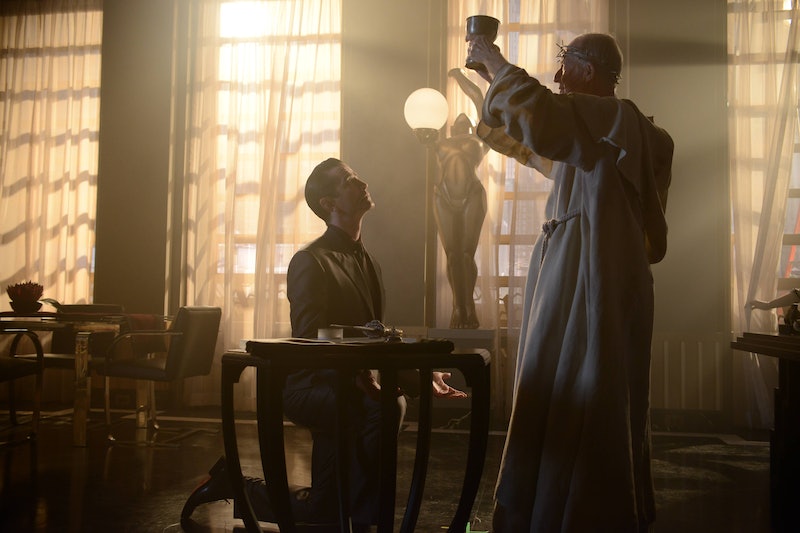 Gotham suffered in its first season for being too upfront about which legendary villains its prequel versions would grow up to be. But all that certainty went out the window when Gotham's "prodigal son" Theo Galavan killed Jerome Valeska in front of the entire city in the third episode of Season 2. Jerome's reign of terror was cut short and the frontrunning Joker fan theory was shot down. In its place, there is Galavan's rise to power, as well as the critical and mysterious source of his vendetta. The new candidate for Mayor of Gotham claims binding familial ties to the city and a desire to lead it to a new golden age. Could Theo Galavan be a member of the Court of Owls, an ancient shadow organization from DC Comics?

A lot of ink has been dedicated to the Court Of Owls in the DC comic canon. Part secret society, part "Big Brother" conspiracy, this group has been embedded in the fabric of Gotham since the 17th century, according to the mythology. I like this theory for Galavan's driving purpose, because it fits a certain theme of this series: any control that the good guys fleetingly feel they've gained in Gotham is only an illusion. Beyond the evil that Commissioner Gordon and the other well-meaning enforcers can see and talk to, there's a malevolent force in the ether. And they've had hundreds of years of practice in self-preservation.

In the trailer above for Monday's episode "Scarification," Galavan speaks with a hooded figure who's interested in the status of young Bruce Wayne. This is the first time Gotham has suggested that Galavan is operating on someone else's orders. But is this person a superior or a co-conspirator? Maybe the Court's plans for Wayne Enterprises require some maneuvering in the daylight and Galavan was the public-facing representative they chose.

Gotham showrunner Bruno Heller was cagey about the details in an interview with Comic Book Resources in September, but did underline the show's plans for folding in this element from the comics. "We are absolutely going to explore that world down the line," Heller said of the Court Of Owls. "Down the line" doesn't necessarily mean way in the future; the installment of Theo and his sister Tabitha may serve as a long and comfortable introduction to the society for the slice of the audience that Heller calls "Nolan-era Batman movie fans."

Galavan's cold confidence, lofty speeches, and plans that are more concrete than those of the average chaos-stirring Batman villain are all hints in favor of his membership in the Court. So far, I just see one major discrepancy. In the comics, the Court Of Owls utilize a group of assassins called the Talons to take out anyone who threatens their anonymity. With a team of assassins supposedly on call, why would Galavan need to put the Penguin and his cronies on murdering the other mayoral candidates? It could be that Galavan simply wants to bring Penguin to his knees and prove that he's running things now. And perhaps his Arkham escapee task force are the next recruits into the Talons' membership.

Whatever Theo Galavan's motivations, the city he calls home ought to be very, very afraid.