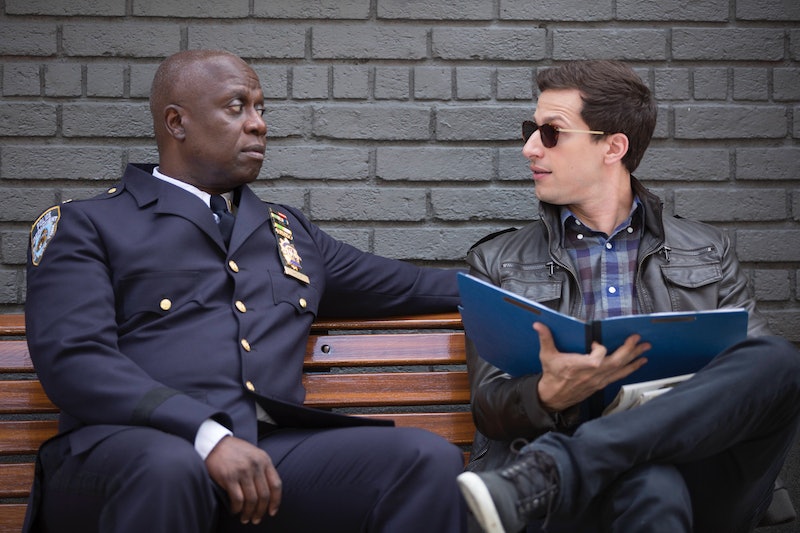 We did it, you guys. After four long episodes of two terrible captains leading the 99th Precinct, Captain Holt finally returned to lead the Brooklyn Nine-Nine once again. Well, I guess when you think about it, four episodes isn't really that much time for this turn of events to take place. Did Wuntch, the person who ripped Holt from the Nine-Nine in the first place, suddenly have a change of heart?

Since hell has not frozen over yet, that could not have possibly been the reason for this reversal to take place. Instead, Holt actually has Jake to thank for getting his beloved job back.

Jake started off Sunday night's episode as he starts off most episodes of Brooklyn Nine-Nine: disobeying orders. He somehow stumbled upon a case that looked like it was the dirty work of the Oolong Slayer, a notorious serial killer the NYPD had been trying to catch for a decade. However, the current captain of the Nine-Nine, who's lovingly named the Vulture, told Jake to let go of the case since cases of that type were supposed to be sent to the Major Crimes division.

Wanting something juicy to work on, Jake disregarded the Vulture's instructions and decided to pursue the case. He enlisted the help of Holt to provide some expertise to help crack the case. Jake also knew Holt was bored out of his mind in the NYPD PR department that Wuntch had banished him to. Holt reluctantly agreed, and then Gina, who, remember, is not a police detective joined because she overheard them sneakily talking about the case in the men's restroom, which apparently has amazing acoustics.

These three made for a delightful trio, which helped make this unusually dark subject matter for this cop comedy more hilarious than horrific. Jake, Holt, and Gina really need to partner up more often. They make for just a whole bunch of weirdness in the best way.

Unfortunately, Jake and Holt bungled the case and went to arrest a man who ended up being dead. Wuntch and the Vulture then found out about their clandestine police work and suspended them.

Suspension is a funny thing. It gives you a lot of time to think, and that's exactly what it did for Jake, who suddenly cracked the case while having a drink with Gina. See? She really does add a lot of value to this team whether she's a detective or not. But this time, Holt declined to help Jake in his police work, because Wuntch.

So Jake decided to go hunt the perp down on his own and almost became the Oolong Slayer's next victim. However, Holt showed up just in the nick of time to save Jake, thus allowing him to say to the serial killer, "You're going to jail for Oolong time." And then he and Holt both yelled, "Punk!" Awww, yeah.

This was a pretty epic arrest, but Holt didn't want any credit in the victory for fear that he would incur the wrath of Wuntch even more. Earlier in the episode, Holt had said that being the captain of the Nine-Nine was what he dreamed of as a kid, and now that she has taken that away from him, he has been so downtrodden.

But all of that was about to change after Jake met with the chief of detectives and said he would keep quiet about his failure to catch the Oolong Slayer in 10 years if he reinstated Holt as captain of the 99th Precinct. When Holt walked out of that elevator, I did a metaphorical backflip because I was so happy to see him back in a role that adds so much to the precinct and so much to the show as a whole. But even more than that, my heart was warmed over the fact that what I thought was going to be another episode showing Holt saving Jake turned out to be the other way around.

More like this
Here’s Where Kirra Hughes Is Now
By Morgan Leigh Davies
Dr. Anna Pou Is Still Practicing Medicine After Facing Murder Charges
By Brad Witter
'Children of the Underground' Subject Faye Yager Now Runs A North Carolina B&B
By Brad Witter
The 'Black Bird' Stars Are Both Heading Back To Apple TV+
By Brad Witter
Get Even More From Bustle — Sign Up For The Newsletter