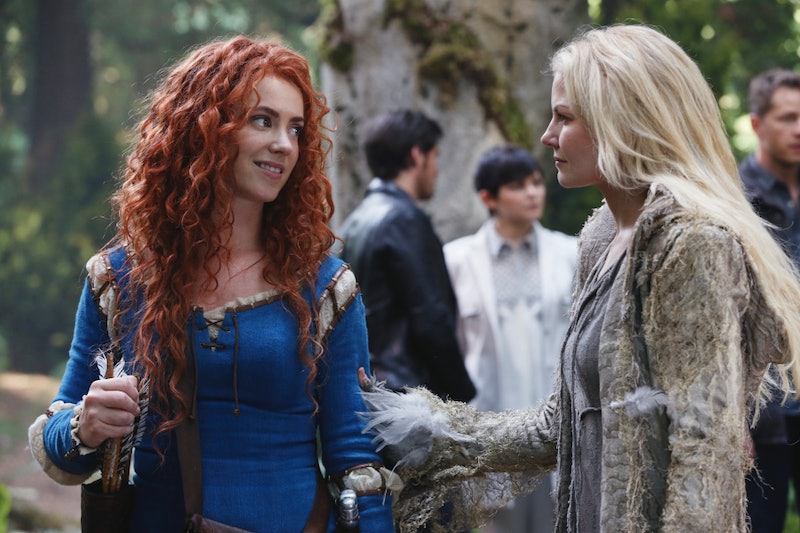 Merida's back guys! The feisty red-headed princess returned to Once Upon A Time in "The Broken Kingdom" though it wasn't under good circumstances. We last saw her running away into the woods away from Emma Swan, hopefully back to her own kingdom to save her brothers. Maybe she made it back, maybe she didn't, because now she's stuck in King Arthur's dungeon. Even worse, in present-day Storybrooke, Emma has her locked up, too. Can't a princess catch a break? And if that's still not enough, now Merida's got to make Rumple "brave" so he can pull Excalibur out of the stonen.

Take a second to process all of that.

No idea how or why Arthur captured Merida and threw her in the dungeon in the first place, but it appears as if Arhur is really good at making enemies (it could have even been Guinevere who threw here in there for all we know). What happens to Merida in that dungeon isn't even the important part right now. Somehow she obviously gets out, and somehow she gets back to Storybrooke with the rest of our gang. And then Emma takes her hostage, and ties her to the front of her yellow bug to save for later. Dark Swan Emma is kinda vicious.

Emma's learned that Rumple is the only one who can pull the sword out of the stone for her. There's just one problem with him, and it's that he's a coward (her words, not mine). Emma needs a hero to do it, and Rumple is her hero, but he can't do it while he's trembling in the corner. So, who better to snap him out of that than Merida, who comes from a movie about being brave?

More importantly, how is Merida going to do that? She's told to take her bow and arrow out of Emma's bug, and then is literally set off to make Rumple brave ~somehow~. But, come on, this is Rumple we're talking about guys. He's not all powerful and brave when he's not the Dark One. And seeing as how Belle was never able to change him in anyway, how is Merida going to do that?

The preview for next week's episode shows her fighting Rumple with an arrow, so clearly his brave training doesn't go so well. But this is Merida. We've seen her laugh in the face of danger (or at least she did in her movie). Hopefully that trait has carried over to TV and she can help Rumple — even though helping him will only make the new Dark One more powerful.