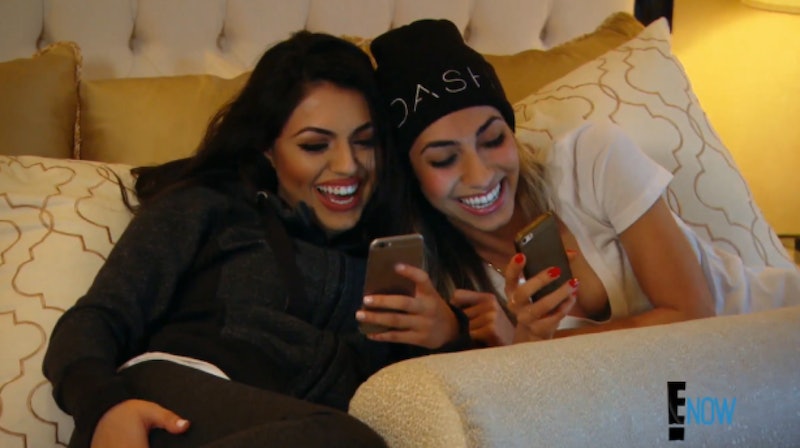 What's that? You say you spent your Sunday evening yelling at the TV while you watched E! original series Dash Dolls by yourself? Wow! You and me both. *Gives high five through the computer screen.* Seriously though, that blurry-faced jerkwad who confronted the Dash Dolls and Dash Dudes at the Miami club was a literal monster. No joke, I actually shouted "WHAT KIND OF MONSTER?" at my television set when that random dude told Josh, Nazy's new beau, to "get a hotter chick." UGH. Such a turd of a human.

But do you know who is the opposite of a turd in my book? Josh. No matter what the turdy human said or did, Josh did not stoop to the turdy human's level. Josh remained calm. Josh dealt with that random blurry-faced turd like a champ. A Josh's ladyfriend noticed what a champ he was; after the fight, Nazy and Durrani remarked that Josh's mature reaction to the blurry-faced turd was "kinda hot."

Before the trip, Nazy worried traveling to Miami together was too big a step too early; They'd only just begun seeing one another, after all. But the end of the trip, she was ready to define the relationship. So, what’s going on with those two now? Are Nazy and Josh still together? Well, if you take a peek at Nazy's social media accounts, you'll find your answer pretty quickly:

There you have it: Nazy and Josh are still very much a couple (and kicking it with giraffes).

More like this
Kim K Broke Her Strict Diet After The Met Gala By Eating These Two Favorite Foods
By Hugh McIntyre
Kourtney & Travis Crashed His Daughter’s TikTok Live In Their 2nd Wedding Outfits
By Grace Wehniainen
When Was 'Bling Empire' Season 2 Filmed?
By Alyssa Lapid
There's One Big Reason Bru & Alyssa Aren't Dating After 'The Circle'
By Gretchen Smail
Get Even More From Bustle — Sign Up For The Newsletter