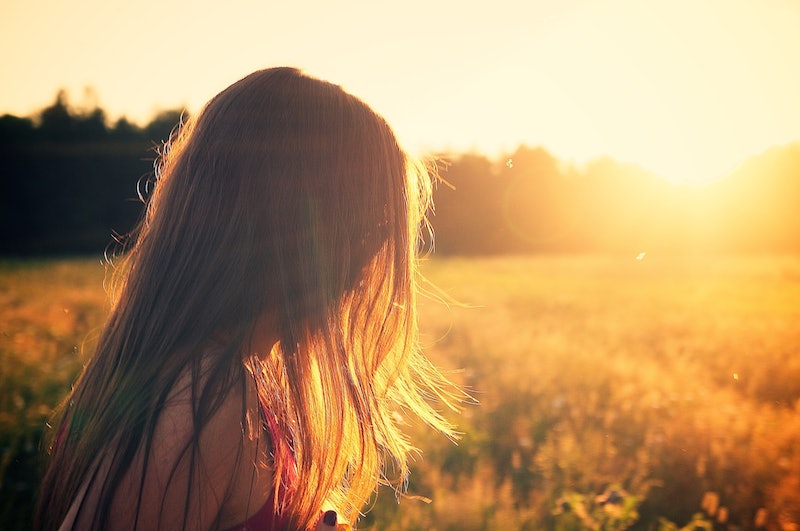 When people think about what factors lead someone to develop an eating disorder, their reasoning is often oversimplified. Many people believe that eating disorders are a result of the media's depiction of extremely thin female bodies as "ideal" — but, while this can be a contributing factor, eating disorders can have many causes. I'm not saying being bombarded with images of ultra-thin women is harmless or doesn't negatively impact our body images; these images can be a trigger for many people struggling with eating disorders, and conscious efforts should certainly be made to represent more diverse body types in the media, for a lot of different reasons. But, like any mental health condition, eating disorders can develop due to a wide range of biological and social factors — not just because eating disorder sufferers decide on a whim that we'd love to look like a runway model.

So if they're not caused by the media alone, what causes eating disorders? There's seldom one single identifiable source. Rather, according to the National Eating Disorders Association, eating disorders are created by a combination of genetic vulnerability, personality traits, and environmental factors. The National Association of Anorexia Nervosa & Associated Disorders explains the cause of eating disorders best: "Our knowledge at this point indicates that genes load the gun and the environment pulls the trigger." In short, some people are born with a genetic vulnerability or certain personality traits that make them more likely to develop an eating disorder. When this susceptibility is combined with environmental factors such as a traumatic experience, a stressful family environment, or participation in a sport that emphasizes body weight, an individual can quickly find themselves pushed into the abyss of an eating disorder.

Eating disorders are real mental health problems, not a choice or something that a sufferer can just "snap out" of if they feel like it. So read on to learn about five things that really can cause eating disorders — because it's not about just being obsessed with fashion magazines.

Although genetics aren't the sole cause of eating disorders, they play a bigger role than many people think. In fact, people who have relatives with eating disorders are seven to 12 times more likely to develop the condition as well. Recent studies have found that several genes are linked to a person's susceptibility to developing anorexia or bulimia. These genes don't necessarily cause an eating disorder, but they create a stronger risk factor.

It's quite similar to the genetic risk factors for depression — people who have an immediate family member with depression are approximately 1.5 to three times more likely to develop the illness than those who don't have depressed family members. And just as some people who are born with a predisposition for depression never develop the condition if they are able to avoid environmental risk factors such as bullying, extreme stress, and trauma, some people born with genetic risk factors for eating disorders don't ever end up developing them, either.

It's also worth noting that individuals suffering from mental health conditions that are strongly linked to genetics, like depression or anxiety, are more likely to develop eating disorders, because they can serve as a coping mechanism for people who are struggling emotionally. So although environmental factors are definitely at play with the development of eating disorders, certain people's brain chemistry and genetic makeup means they are more vulnerable than others.

Although there are always exceptions, according to the Center for Eating Disorders at Sheppard Pratt, the stereotype linking eating disorders to perfectionism is fairly accurate. Other personality traits that are common among those suffering from eating disorders include obsessive thinking, hypersensitivity, and generally low self-esteem. Of course, again, plenty of people possess these personality traits and don't develop eating disorders — which further emphasizes that the illness is caused by a combination of factors, rather than just one.

Eating disorders are so strongly linked to trauma that many residential treatment centers have specific tracks for trauma survivors. One study of eating disorder patients found that a whopping 74 percent had experienced a traumatic event, and 52 percent met criteria for a PTSD diagnosis. Although we should never automatically assume that someone with an eating disorder has a traumatic past, it's important to know that trauma does heighten the risk for developing an eating disorder.

Despite the fact that eating disorders are inherently destructive, they can give trauma survivors a sense of power — a feeling they often crave more than anything after being the victim of something terrible that was out of their control. Anorexia, bulimia, and binge eating disorder can also have an emotionally numbing effect and provide a distraction from obsessive, intrusive thoughts about the trauma.

Recent studies have debunked the theory that family factors are the main cause of eating disorders, as well as the idea that a specific parenting style leads to the development of anorexia, bulimia, and binge eating disorder. People with eating disorders come from a variety of family backgrounds — and, like the rest of the population, some have healthier family relationships than others.

That being said, research has linked certain family dynamics with the development of eating disorders, although they're not the sole cause. For example, according to the resource guide developed for the PBS documentary Perfect Illusions , having an extremely controlling parent or parents is often associated with anorexia, because the illness can be an attempt to have complete control over at least one area of your life. And households where there is extreme chaos, stress, and unpredictably typically have a negative emotional effect on the children growing up there. People from toxic families often struggle with anxiety and interpersonal relationships. Again, not all will develop eating disorders — but it does create a risk factor.

Girls and young women who are extremely involved in physical activities like dance, gymnastics, and figure skating are more likely to develop eating disorders, due to the heavy emphasis placed on body weight in the cultures of many of these activities. It's also common for teachers and coaches in these fields to freely comment on their students' size, which often leads to extreme self-consciousness, humiliation, and the desire to lose weight. Dancers are three times more likely to suffer from eating disorders than the general population. And, the NCAA has reported that between 51 and 62 percent of gymnasts have disordered eating patterns — a far higher rate than any other elite sport.

Again, participating in these activities isn't the sole cause of an eating disorder. But many people who are drawn to pursuits like elite dance, gymnastics, and figure skating are already perfectionists by nature, so if an authority figure tells them their body weight isn't ideal, they are more likely to seriously try to do something about it. And, if they already possess genetic or personality risk factors, participating in these activities can be enough to push them into an eating disorder.

No Matter What The Cause, Recovery Is Possible

Eating disorders are caused by a complex combination of genetic and environmental factors. For every person suffering from an eating disorder, there's a unique story and set of causes behind the illness. It's crucial to recognize that eating disorders are a disease, not a choice. But, luckily, regardless of cause, recovery is possible — and it's more than worth all the hard work.

More like this
On TikTok, #SeñoraEra Shows Latinx Users Becoming Their Mothers
By Natalia Perez-Gonzalez
'Heartstopper’s Joe Locke Called Out The Isle Of Man’s Queer Blood Ban
By Sam Ramsden
Scotland's First Period Dignity Officer Has Sparked Backlash
By Darshita Goyal
Why Experts Say Sleeping With A Fan On Isn’t Totally Risk-Free
By Sophie McEvoy
Get Even More From Bustle — Sign Up For The Newsletter