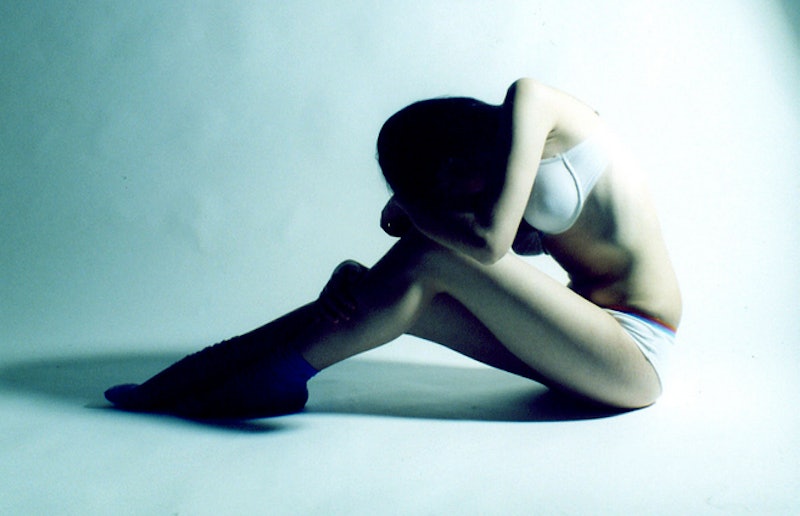 Editor’s Note: Feb. 22-28 is National Eating Disorder Awareness Week. In recognition, each day this week, we’ll be featuring a piece about women’s body image. And please, remember: If you’re struggling with your body image or an eating disorder, you’re not alone, and help is available.

Feb. 22 marked the beginning of National Eating Disorder Awareness Week, an annual outreach effort by the National Eating Disorders Association designed to help the public learn more about the signs and risks of eating disorders. This year's theme, "I Had No Idea," focuses on addressing the most-overlooked symptoms and behaviors of those with eating disorders; signs that their friends and family often miss, either because they’re not educated enough on the topic, or are simply in denial. But since early intervention and treatment offer the best chance of recovery for those afflicted with eating disorders, becoming familiar with the symptoms and signs of the illness is crucial.

According to the National Association of Anorexia Nervosa and Associate Disorders, 24 million people in the United suffer from eating disorders. Those most affected by the disease are women in their teens and early 20s, but tragically, kids as young as five years old can also be affected. Eating disorders also have the highest mortality rate of any mental illness.

As with any mental illness, educating ourselves about eating disorders like anorexia, bulimia, and binge eating are one of the most important methods of combating them. During National Eating Disorder Awareness Week, let’s all take the time to make sure we're really informed about the disease and how it impacts those who suffer from it. Here are nine things about eating disorders that everyone should know, to help our loved ones, and ourselves.

1. Eating Disorders Are A Mental Illness

Far too often, eating disorders are dismissed as simply a compulsion to look thin, a phase that the sufferer will grow out of. But they’re so much more than that. According to Mental Health America, eating disorders are a mental illness that stems from “sociocultural, psychological and biological factors.”

In fact, it has been found that eating disorders run in families, leading scientists to believe that there is a genetic component. Those who have a mother or sister who is anorexic are 12 times more likely to develop the disease, and four times more likely develop bulimia than those in families where eating disorders are not present. And while research remains inconclusive, some scientists believe that one of those possible biological factors may be an imbalance in the brain chemicals that control hunger and appetite.

And eating disorders are often just one of several mental illnesses that sufferers are struggling with. For example, 50 percent of those with an eating disorder also suffer from depression.

2. Eating Disorders Kill More Often Than Any Other Mental Illness

Eating disorders have the highest mortality rate of all mental illnesses, and women between the ages of 15 and 24 who have an eating disorder are 12 times more likely to die from it than from any other cause.

Roughly 20 percent of those with eating disorders will die prematurely, due to either heart problems from the physical stress of the disease, or suicide from the mental stress of it.

3. Women In Their Teens And Early 20s Are Most Affected

The National Association of Anorexia Nervosa and Associated Disorders has found that 86 percent of women develop an eating disorder before the age of 20, 43 percent develop them between ages 16 and 20, and 95 percent of those who suffer from eating disorders are between 12 and 25. Anorexia accounts for a third of all chronic illnesses among teens, and 25 percent of college women resort to binging and purging as a means to keep their weight down.

While women are more likely to develop an eating disorder, men are affected, too. Of the 24 million people (of all genders) who suffer from eating disorders, about four to 10 percent of those with anorexia or bulimia are male, according to the National Eating Disorders Association. But among gay men those rates are higher; 14 percent of gay men suffer from bulimia, and 20 percent are afflicted with anorexia. Men are typically less likely to get help for an eating disorder than women because of the stigma that it’s a “woman’s disease.”

According to Dr. Gene Beresin, an associate professor of psychiatry at Harvard Medical School, anorexia nervosa has two peak times when women are most likely to be afflicted with the disease — first between the ages of 10 to 13, and then between the ages of 13 to 18. However, that hasn't stopped girls as young as five and six from suffering from eating disorders.

Studies have found that 42 percent of girls in 1st to 3rd grade want to be thinner and 81 percent of 10-year-old girls are genuinely afraid of getting fat. The Agency for Healthcare Research and Quality found that the hospitalization for eating disorders in kids younger than 12 jumped by 119 percent from 1999 to 2006.

6. One Person Can Have Multiple Types Of Eating Disorders

Although bulimia nervosa and anorexia nervosa are different diseases — bulimia involves binge eating then "purging" or vomiting, while anorexia makes sufferers restrict their eating, or not eat at all — the two can sometimes overlap. According to Mental Health America, 50 percent of anorexics will also develop patterns of bulimia, adopting binging and purging in addition to restricted eating as they try to keep their weight down.

7. Most People With Eating Disorders Aren't Getting Help

Only one in 10 people struggling with eating disorders get help, either on their own or because they’re pressured by friends and family. And of those people getting treatment for the illness, only 35 percent are able to get specialized treatment at an eating disorder facility.

8. Recovery From An Eating Disorder Is Possible

According to eating disorder awareness site ANRED, 60 percent of people with eating disorders will recover if they seek treatment. As with all mental illnesses, no one is ever "cured;" but while they may struggle, many people who have suffered from an eating disorder can go on to maintain a healthy lifestyle.

However, 20 percent will only make a partial recovery even with treatment, which means that while they may look like they have things in check on the surface, psychologically, they’re still participating in eating disorder related behavior.

The remaining 20 percent who seek treatment never recover, meaning they struggle with their eating disorder for the rest of their life.

9. The Media Is Proven Part Of The Problem

Although the unrealistic body images presented in the media are just one of many factors that can influence people to develop an eating disorder, they are a significant part of the problem.

According to the National Association of Anorexia Nervosa and Associated Disorders, 47 percent of girls in grades five through 12 attribute their desire to lose weight to the images they see in magazines, and 67 percent of girls in that same age bracket report that those magazines have influenced their ideas of what a “perfect” body should be. However, as the ANAD reports, only five percent of American women actually naturally have the kind of “perfect” body that is splashed all over the pages of magazines.

Clearly, we have our body positive work cut out for us.