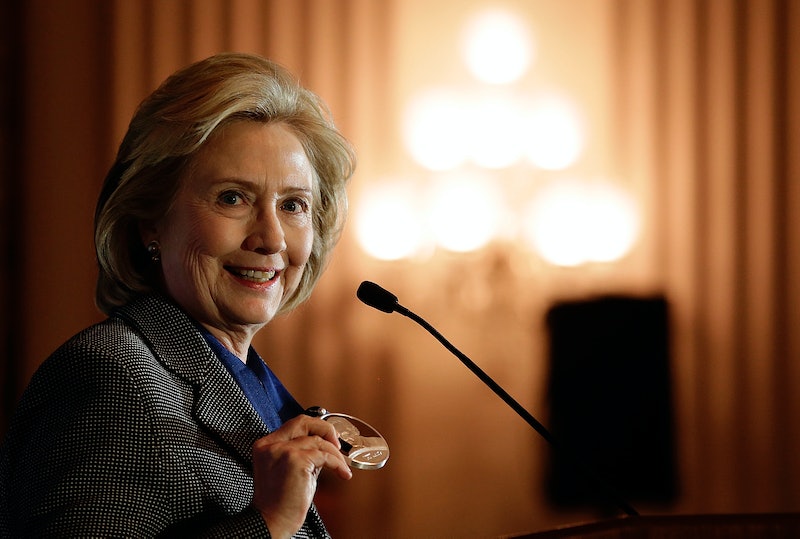 Jennifer Lawrence and Beyoncé proved that 2013 was a year of radical hair transformation, and based on Hillary Clinton's new bangs, 2014 will keep the tradition alive. Clinton trimmed her signature short crop to include a tousled fringe, debuting the cut at New York City mayor Bill de Blasio's inauguration. The resulting reactions nearly made the city forget the impetus behind the occasion itself.

The Cut's headline summarized the reactions of many, announcing "Hillary Clinton Gets Bangs, Nation Rejoices".

Refinery29 took a philosophical approach to the debate, asking "What do Hillary Clinton's Bangs Mean For America?" Gabriel Bell writes:

Twitter predictably provided a forum for the most enthusiastic and outlandish commentaries on the style switch up, with reactions ranging from elation and outrage to bewilderment. Twitter user @maxdkaplan called on The Great Gatsby to illustrate the public's obsession with Ms. Clinton's hair:

User @DaveMc99TA followed another thread of social media speculation on the haircut by linking it to the former First Lady's political inclinations, tweeting:

The social media frenzy ignited a more serious reaction in some readers, who claimed that the focus on Clinton's hair detracted from more pressing concerns such as the new mayoral elect, and in fact Clinton's own political views and plans for the 2016 presidential election. Twitter user @rachaelrobes tweet response to the news story:

And some social media users were simply confused about the fuss. @monickiy took a moment to question the bangs-in-politics trend, tweeting:

What we can glean from the mess of conflicting opinions is as follows: Hillary Clinton made a brave style departure from her established look. The haircut has absolutely nothing to do with her political beliefs, presidential aspirations, or, despite what some are claiming, Michelle Obama's bangs. Ms. Clinton simply happens to appreciate a chic haircut now and then when she's not writing books, working with the Clinton Foundation, or speaking her opinion on issues such as family planning and education.

And she should be applauded for ringing in 2014 with a fresh new 'do.