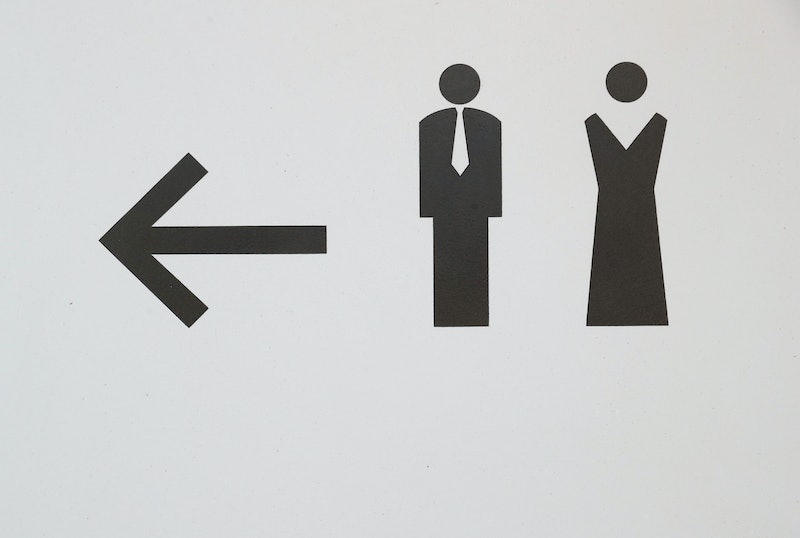 If you ask people where gender comes from, most would probably say it's at least partially a social construct. But Milan R. Vuckovic's "The Fabric Of Gender: video takes a position on the nature versus nurture debate that is often considered radical: Gender is entirely a product of society. Before you roll your eyes at this statement as an illustration of feminist wishful thinking, hear me out — it may not be as extreme as it appears.

People who argue that gender can be entirely attributed to socialization aren't typically arguing that genes have no influence on behavior. In fact, one of the most prominent proponents of social constructivism cited in the video, Anne Fausto-Sterling, is a biologist. Rather, proponents are usually saying at least one of several things: That there is far more genetic variation between individuals than there is between genders (or races, for that matter), that no aspect of behavior is based purely on genes because our environments affect us on a deep physical level, that stereotypes are powerful forces that can obscure any innate proclivities we might have, and/or that sex is neither a binary nor the same as gender. The argument is not that everything is nurture and nothing is nature, but that nature and nurture are inseparable. For these reasons, it doesn't make sense to explain stereotypes and inequalities with evolutionary theories of gender. Besides, biological claims like "men are innately better at math" can have harmful effects and should not be thrown around lightly.

"The Fabric of Gender" goes into greater detail on four reasons that gender is a product of society, not biology — because while science is often used to justify gender roles, there's also a lot of science that challenges them. Here are some compelling pieces of evidence the video cites; scroll down to watch the whole thing.

1. Gender Is Sometimes Really Just In Our Heads

When we believe men and women are behaving differently, sometimes we are really just interpreting the same behavior differently. The video illustrates this concept with an experiment on observers' assessments of a baby reacting to a jack-in-the-box. Everyone watched the same video, but when the researchers referred to the baby by a girl's name, people thought "she" was scared; when the baby had a boy's name, they thought "he" was angry. This asymmetrical application of labels happens all the time in our society: When a man has a lot of sexual partners, he's a player, but when a woman does, she's a slut. When a man expresses anger, he is persuasive; when a woman does, she is emotional. Gender stereotypes lead not only everyday observers but also scientists themselves to detect differences that aren't actually there. In the book Pink Brain, Blue Brain , biologist Lise Eliot points out that one study allegedly showing that little girls make more eye contact than boys (which other studies have debunked) was performed when the researcher observing the children knew their gender, which can introduce bias. Which leads us to realize...

2. Science Is Not Completely Objective

Science, Vuckovic points out, is male-dominated, with a history of justifying racism, sexism, and homophobia. In the 19th century, scientists known as phrenologists claimed that people of color had skull structures indicative of submissiveness, which allegedly meant that slavery was the natural order of things. Now, we see this claim was not only morally wrong, but also scientifically inaccurate, but we may be blind to new ways modern-day scientists have used their research to justify a political agenda or culturally informed beliefs. For example, sociologist Mark Regnerus published a famous study allegedly demonstrating that children with same-sex parents were less well-adjusted. Since then, a number of critics have observed that Regnerus's findings were not objective, with numerous flaws in the data analysis potentially motivated by sponsorship from conservative organizations. Vuckovic also cites Delusions of Gender by Cordelia Fine, which points out that a lot of neuroscience studies purporting to show differences between male and female brains have used flawed methodology or jumped to unwarranted conclusions.

While the scientific method provides objectivity that you just can't get from good old speculation, it is still subject to human bias at the stages of experimental design, data analysis, and interpretation of results. Some feminist philosophers and scientists have also claimed that science relies on stereotypically "masculine" metaphors and patriarchal principles, which is beyond the scope of this article but also fascinating.

Vuckovic uses a study on stereotype threat to illustrate this principle. When women were told before a math test that women tend to perform less well than men, their scores were lower than women who took the test without any preamble. In another study, when subjects were all told to picture themselves as stereotypical men, the gender gap found on a mental rotation task, which is often viewed as a test of mathematical ability, vanished. It's not that these women were trying to do less well on the exam or the rotation task, but stereotypes have a way of creeping in and influencing our behavior without us realizing it. Another area where stereotypes influence behavior, perhaps more overtly, is sexuality. One study showed that women reported as much interest in casual sex as men when reassured that they would not be judged and their partner would be a "great lover." Research has also shown that stereotypes lead men to deny their emotions. Taken together, all these studies show that many of the gender differences we observe are likely due to socialization, not biology.

This last reason to distrust biological explanations of gender is not a fact but rather a huge collection of insights provided by philosophers with a social constructivist approach to gender, race, and other aspects of identity. Vuckovic recommends reading the ancestors of enlightenment, rationalists, irrationalists, existentialists, and linguistic philosophers, but her last recommendations and my personal favorites are the poststructuralists, including Judith Butler, Michel Foucault, and Jacque Derrida. The basic argument of poststructuralism is that things don't have inherent meaning; rather, we assign meaning to things (including bodies) to make sense of the world. Poststructuralist philosophy also points out that our understanding of the world is limited by our language, and in most Western cultures, this language is built around hierarchical binaries like masculine vs. feminine. A lot of poststructuralist writers are known for their impenetrable writing style, however, so for a quick introduction, I'd recommend the comic book (yes, comic book) Introducing Semiotics: A Graphic Guide . Philosophy alone may not provide scientific evidence, but it will challenge the way you think about science and the world altogether.

More like this
The Church Of Scotland Votes To Allow Same-Sex Marriages
By Sam Ramsden
'Heartstopper’s Joe Locke Has A Sweet Message For Queer Fans
By Sam Ramsden
Jake Daniels Just Became The UK’s First Active Football Player To Come Out As Gay Since 1990
By Sam Ramsden
Sandra Bullock, Girlboss Extraordinaire
By Matt Harkins & Viviana Olen
Get Even More From Bustle — Sign Up For The Newsletter