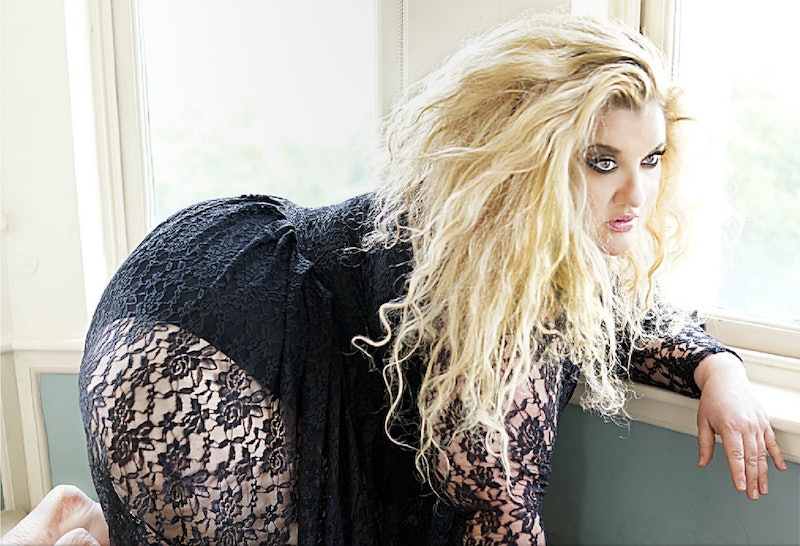 Velvet D'Amour is the woman I want to be when I grow up: Powerful, passionate, and plus size. The Oct. 2015 issue of her magazine Volup2 is centered around the theme of the "Rebel," an aspect of fashion and lifestyle that Velvet D'Amour already embodies herself. The publication's message is simple: Inclusion and celebration of every type of person, not just those of the same shapes and sizes repeated infinitely in media. As D'Amour tells me in an email interview, "showcasing people who modern media completely rejects because they are too fat, too old, differently abled, transgender, not hourglass shaped, or white, or tall," is what makes Volup2 so unrivaled when it comes to glossy mags.

Although this issue focuses on the rebel, it's obvious that Volup2 has been rebelling against the industry for years. It's not that Velvet D'Amour is trying to push boundaries for shock value or to sell issues, but because "inclusion is definitely sewn into the fiber of [her] being." By staying true to who she is, D'Amour has turned her cause into a passionate attack on the norm. This issue may focus on the different types of rebellion in beauty, but through her own fearlessness, it's easy to see that D'Amour is an original rebel.

Before the launch of the publication in 2012, D'Amour was already a force within the fashion world. She tells me that after taking the lead role in the 2006 dark comedy Avida, she caught the attention of sartorial powerhouses like John Galliano and Jean Paul Gaultier, leading to walking their runways in 2007 and coining the term "super plus size model" — a model who's larger than the industry's usual plus range of sizes 8 to 16. For arguably the first time in haute couture, plus size representation was coming via a realistic portrayal of a fat woman. Considering her smashing of stereotypes and arbitrary beauty standards, allowing other rebels to take the spotlight in her magazine was a natural next step in her battle for societal body positivity.

But making the jump from model to magazine mogul has been frustrating, D'Amour tells me. "It never ceases to amaze me that as a model I can get press from here to eternity because I walked down a couple Paris runways back in the day, yet here I am creating a magazine that is likely the most inclusive fashion magazine in existence [...] I happen to think that such a magazine merits to be talked about, yet I can’t seem to make that happen."

Although D'Amour sees this lack of press as her "downfall," I can't help but perceive it as society's failure, and not Volup2's. A publication that represents every type of person (often via nude and poignant editorial shoots) should theoretically sell to every type of person. However, we're taught to adore and aspire to the thin, the white, and the rich — and these are arguably the qualities at the center of high fashion magazines that the public purchases. According to research by The Fashion Spot, fashion magazine covers in 2014 still placed predominant focus on white, "aspirational" bodies. Out of 611 covers, "white models appeared 567 times while people of color made 119 appearances."

If the fashion publishing industry was based more on positivity rather than unattainable aspirations, D'Amour believes the world would change. "When we aren’t burdened with what can seem an omnipotent sense of self-loathing because we can’t live up to this unattainable beauty ideal that accosts us on so many levels wherever we go, we are then free to do so much good beyond the self," she says.

Through Velvet D'Amour's personality and presence in the fashion and beauty industries, I've personally been able to see myself represented in areas of art that I adore. And through Volup2, D'Amour has been able to provide that same reflection to others the world over. Not everybody is a model and not everybody is D'Amour's personal brand of big bouncy blonde — and that's OK. She knows how to see and represent the beauty that's found outside of the industry and bring it back inside. This act may be a rebellion to the rest of the world, but to D'Amour, well, she's simply representing beauty wherever she finds it (which is everywhere and in everyone).

D'Amour doesn't stick to the three word trope of "everyone is beautiful," though. Instead, she describes in intimate, delicious detail how and where she sees the beauty in everyone: "Yep, a 17-year-old, 6-foot tall, white, size 0 is f*cking hot and so is the character I see in the lines of an 80-year-old, and the strength I see in an amputee, the glorious curve of hundreds of pounds of flesh, the delicate, breakable, protruding neck bones of a dancer, and the magic of unveiling the beauty I see via my camera."

In the eight years between 2007 when D'Amour came into the spotlight and now, the diverse representation of plus sizes has come a long way from hourglass figures and frumpy clothing. For many, being able to express themselves in clothes made to flaunt rather than "flatter" is worthy of celebration. For D'Amour, however, this isn't enough. She believes we're still only on the "cusp of change," but that hopefully she'll be the one to lead the rebellion that will push us over the edge.

"The richness that is humanity is so succulent that the current practice of the fashion world genuinely makes zero sense to me — clinging fervently to literally unattainable beauty ideals versus having a broader vision of beauty represented in fashion [...] I get the sense that one day in the future people will look back at the staid, homogenized fashion magazines we see today and they will wonder how on earth we could have denied the majority of the female populace the right to see a little something of themselves as they flipped through the pages of a fashion magazine."

As for her opinion on the popularity of "body positivity" as a sort of buzzword in 2015, it reflects D'Amour's refusal to settle for second best representation. "I think it’s a step forward if there is more than a verbal acknowledgement," she notes. "If you put your money where your mouth is and actually back body positivity with actions taken, then it feels authentic and I think that is what many are looking for now, just to be credible."

While other brands play catch up, D'Amour's rebellion rages on. Although she feels under the radar, that's how the best rebellions begin, isn't it? By rounding up the unrepresented and the under-appreciated and giving them a voice. Velvet D'Amour is so much more than all of my aesthetic aspirations. She's a rebel with a cause.

Want more body positivity? Check out the video below, and be sure to subscribe to Bustle’s YouTube page for more self-love inspo.