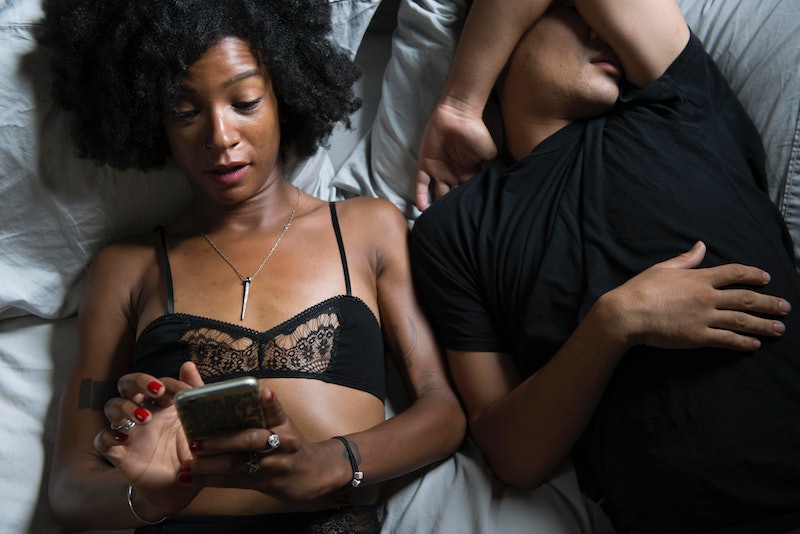 Jealousy is a bitch. Even the most progressive and chill of us aren't immune to the nagging questions that can creep into any coupling: Am I enough for him/her? Does s/he like so-and-so more than me? Some try to allay their fears by having strictly monogamous relationships, but dealing with jealousy in open relationships is a bit different, and arguably requires more self-awareness and reflection.

Those unfamiliar with consensual non-monogamy are often incredulous that anyone can survive having multiple partners without being overtaken by the green-eyed monster. In fact, the number one question posed to people in non-traditional relationship structures usually pertains to jealousy. And while it'd be awesome if the answer to those queries was always just, "nah bro, I'm too cool to be jealous," it's not usually the case. We're all wired to deal with emotions differently, no one is 100 percent immune to jealousy, and those who pursue more open forms of romantic attachment are unfortunately just as human and vulnerable as those who go the paired off route.

1. Read Up On The Subject

Admitting you're jealous can seem the same as admitting you're weak and not the free thinking rebel you're supposed to be when you sign up for an open relationship. So on top of feeling jealous, you also have the added helping of shame that comes with it for feeling the jealousy in the first place. Why suffer twice? Identifying and owning up to your jealous feelings is the first step in dealing with them.

3. Identify The Root Cause

In a panel about polyamory and the future of relationships, poly advocate Diana Adams discusses how she learned her jealousy in one particular instance stemmed from low self-esteem in childhood. She was triggered by her partner's new partner not because he was doing something "wrong," but because it brought up feelings from her past about not being attractive or worthy of male attention. By finding the root cause of your jealousy, you can work on strengthening yourself and your relationship.

Communication is the foundation of consensually non-monogamous relationships. But the way you communicate is key. According to author of More Than Two Franklin Veaux, "Communication is about increasing understanding. If you simply say 'This is how I feel' and leave it at that, the conversation is done, and you’re not really increasing understanding, because your partner still has no idea why." For help on communicating more effectively, see #1.

If most of your friends are involved in monogamous relationships, it can feel very lonely dealing with your non-monogamous growing pains. Thankfully, there are workshops to get some in the flesh guidance and meet other like minded folks, and there are organizations and clubs in most cities that foster community between the non-monogamous in their many forms. Just remember, you are not alone.