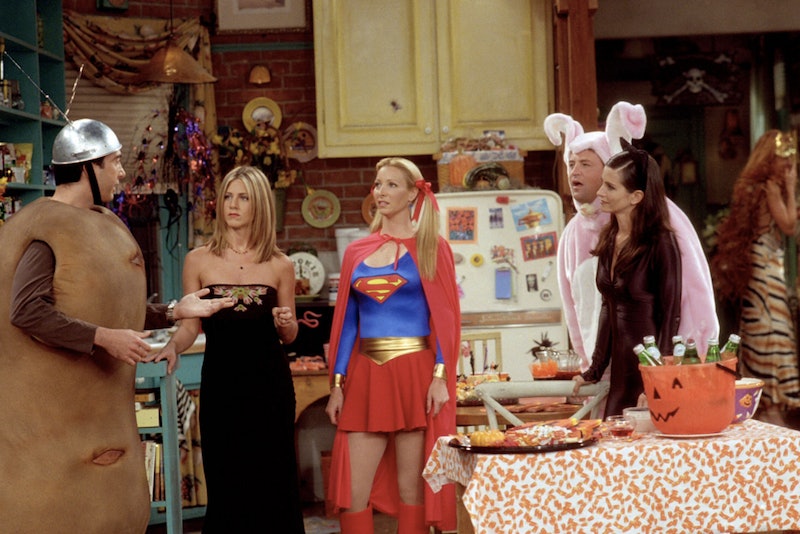 Am I the only one who puts less thought into my actual costume than I do into discovering other Halloween-themed activities that I can do throughout October? I hope not, because deciding what to watch for Halloween is one of my greatest pleasures, and I refuse to live in a world where everyone else is missing out on the things I enjoy by being social and going to parties or something. But, anyway, as a Friends fan, I can't be the only one who is wondering which Friends episodes to watch on Halloween if I want to get my thrills. But one thing that's always driven me nuts about the beloved show, is that, in 10 glorious seasons, they only made one Halloween episode.

I've done my best not to hold it against them, because Friends is one of my favorite shows of all time, but it's one of those things that eats away at you over the years. How am I supposed to keep my love for Rachel, Ross, Phoebe, Chandler, Monica, and Joey alive in the years since the show has gone off the air without repeated themed viewings corresponding to any and all holidays? One half-hour episode every October isn't gonna cut it.

So what I did was round up six more episodes that aren't specifically about Halloween, but definitely have themes... if you look hard enough.

1. If You're In The Mood For Something Scary

Remember that time when Ross lost his mind and started following his friends Rachel and Phoebe around and jumping out at them, and even tried to hire a stranger to "scare" them? Pretty terrifying behavior from a close friend! Relive the fear with Season 6, Episode 7: "The One With Unagi." Shudder.

2. If You Like Dressing Up, But You're Also Pretty Lazy

May I recommend Season 1, Episode 17, "The One With Two Parts?" You're looking for Part 2, where Phoebe pretends to be her twin sister Ursula in order to let Joey down easy after he was dating her. All she does is wear a vaguely different sweater and do her hair differently, so it's perfect for the woman who strolls into a costume party dressed as herself with a funky braid, and then claims, "I'm going as my identical twin sister from Mad About You."

There's no bigger trick than moving everything you own into the apartment across the hall, and vice versa, like Monica and Rachel do in Season 4, Episode 19, "The One With All The Haste," while Joey and Chandler are at the Knicks game. Even just talking about a prank that extensive makes me tired.

Truly, I don't think there's anything in life that brings me greater joy than Friends bloopers. The cast is having so much fun with each other and laughing so genuinely that it makes anything and everything better. Treat yo self.

5. If It's Really Just About Fall For You

Hey, there's a bunch of fall stuff in Season 3, Episode 9, "The One With The Football." It's technically a Thanksgiving episode, and as you may have intuited, there's some football in it, but there are also cool weather clothes and a whole lotta fallen leaves, so it gives a very autumnal vibe.

6. If You Like Making Yourself Sick With Junk Food

For some people, All Hallow's Eve is all about the sugar rush, and, for you, I present Season 9, Episode 19, "The One With Rachel's Dream," in which Ross gets high off of maple candies during a visit to Vermont and loses his mind.

7. If You Want Straight-Up Halloween

And, if none of these options quite tickle your spooky bone, go straight to the good stuff: "The One With The Halloween Party," Season 8, Episode 6. It's all your favorite Friends in costumes, so that should satisfy your craving if nothing else does!

Ahhhh. Much better, right? Even when they don't give us exactly what they want the first time around, Friends does provide. Praise Friends!