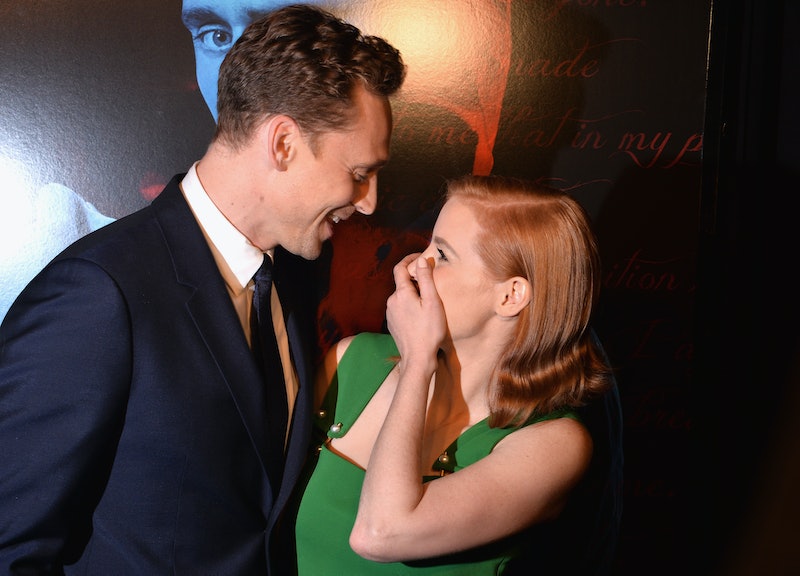 With the release of Crimson Peak, Hiddlestoners can't get enough (more so than usual) of Tom Hiddleston. Well, lucky for them Tuesday brings a brand new MTV After Hours segment featuring Tom Hiddleston and Jessica Chastain. For those unaware, the web series is hosted by MTV News' Josh Horowitz and shows him spinning a typical interview into something fun. Or, as the official website puts it, "After Hours is the only place [to] catch your favorite stars doing the craziest things possible." If it involves T. Hiddles and Chastain, count me in. Plus, if it is going to feature Hiddleston in a tux, you know I'm there.

Details surrounding this particular episode are being kept under wraps until its release on Tuesday at noon, but thankfully Horowitz has shared some teasers via Instagram. Horowitz wrote alongside an Instagram shared last Tuesday, "Cooking up something fun with Tom Hiddleston. Coming soon!"

He then teased an interesting and intriguing photo of Chastain in a dress, Hiddleston in a tux (*swoon*), a creepy rocking horse, and what appears to be a man (is that Horowitz?) dressed in black leather, wearing a police officer's hat, and holding a whip and a stereo. What is happening? Whatever is going on, it's hard to look away, that's for sure.

I'm not sure if this is Horowitz's own spin on Crimson Peak or if he's writing a new American Horror Story anthology. Whatever is it, here's hoping it's as good as that time he had a slumber party with Hiddleston. The sleepover involved games, like Truth or Dare, jumping/dancing on the bed, and a pillow fight. Yeah, that's kind of hard to beat.

Hiddlestoners, now all you have to do is wait patiently for Tuesday.