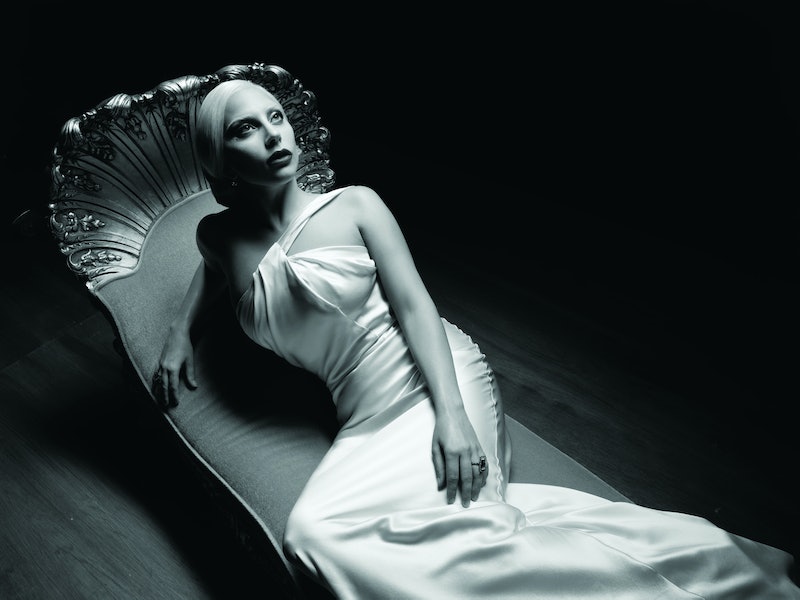 Horror comes with the name of American Horror Story, but when we met the owner of Hotel Cortez, James March, I thought we might have been introduced to one of the most terrifying characters in all of AHS history. And who else could Mr. March be married to other than the queen of the season, The Countess. We don't know if James March is married to Lady Gaga on AHS: Hotel , but there are a few hints that these two could be truly be a match made in hell.

From the moment we met Mr. March, I knew he was going to be a shady character. Did I know he was going to build an entire hotel just so he could murder people and dispose of their bodies down a laundry shoot? Nah. But how often can you really predict those things? Ryan Murphy teased that Mr. March was "the worst human being to have ever lived" to Entertainment Weekly, and boy was he right. In a more recent interview with the publication, Murphy says that James March and The Countess have a tie that will later be revealed with, "she does have a very strong connection to him." Could that connection be one of matrimony? We'll find out, but I think that these two are definitely married in the time that March was at his peak killing days.

She Was Alive Then

The Countess told Tristan in "Chutes and Ladders" that she was born in 1904. James March was around in the 1920s, although we don't know an exact time frame, yet. It is very likely that their lives intersected and Gaga is the mystery wife.

In a flashback to James March's time, viewers got the quickest glimpse of his wife's hair, and it greatly resembled a coif that only Gaga could pull off.

It Would Explain How She Got The Hotel

If James March owned the hotel, and he died — although didn't really die? — it would make sense that his wife at the time, The Countess, would inherit the hotel (if it weren't condemned for being a murder hotel). We don't know just how The Countess got to have so much control over the hotel, but this is definitely one way she could become the HBIC.

James & Wife Had An Obsession With Murder

We also learned that James March's wife was fully aware of his murderous rampage and even took part a bit. She may have even ratted him out to the police. The Countess is certainly a dark soul, which could easily have married an equally dark soul like Mr. March.

More like this
Evan Peters Decompressed After 'Dahmer' By Watching This Will Ferrell Movie
By Grace Wehniainen
The First Trailer For 'That '90s Show' Includes So Many Nods To The Original Series
By Jack Irvin, Alyssa Lapid and Grace Wehniainen
Elizabeth Debicki On Her Approach To The Most Debated Scene From 'The Crown'
By Grace Wehniainen
Matt Smith Proves He's Daddy Daemon In This Viral 'House Of The Dragon' Video
By Marina Watts
Get Even More From Bustle — Sign Up For The Newsletter