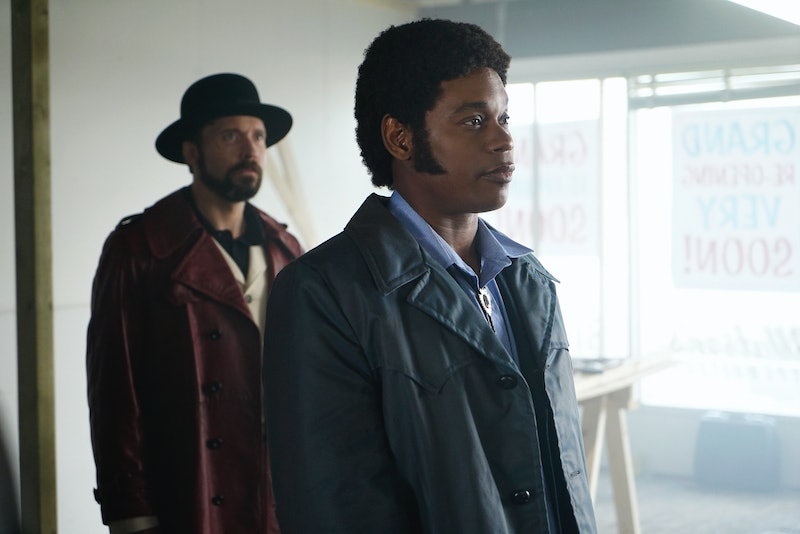 Between the unending parade of new characters, the new time period and location, two different crime syndicates, a triple homicide, a hit-and-run — not to mention A LITERAL UFO — last week's Season 2 premiere of FX's Fargo was quite the busy episode. Just in case that hour of television wasn't jam-packed enough for you, the second episode of the new season introduced viewers to even more characters and storylines... namely, the Kansas City mafia, as personified by enforcer Mike Milligan (Bokeem Woodbine) and hired hands Gale & Wayne Kitchen (identical twins Brad & Todd Mann), who are attempting to "acquire" the Gerhardt family's business in the wake of patriarch Otto's sudden and debilitating stroke.

The most memorable new character in the second episode, "Before The Law," was undoubtedly Woodbine's Mike. Whether he was actively shaking down a mark for information or simply cruising by a crime scene in his car, his mere presence was simultaneously unsettling and intriguing. He managed to get the information he needed from the owner of the typewriter store with nothing more than a necktie and a few persuasive sentences. And even though his shifty drive-by of the Waffle Hut aroused Lou Solverson's suspicions, he was able to talk his way out of his ensuing encounter with Hank Larsson.

Even though it seemed too early in the season for a fatal collision, it was hard to see how Hank's ill-advised roadblock was going to end in anything other than a bloodbath. Outnumbered by Mike and his silent henchmen, the Kitchen brothers, Hank bravely stood his ground even as Mike stood his, refusing to be bullied by the local sheriff. Ultimately, Mike & Co. were allowed to go on their merry way — but not before Hank made it clear that they would have to answer to him if they caused any trouble on his side of the state line.

This tense exchange was highly reminiscent of Lorne Malvo's introduction in Season 1 of Fargo, in which Billy Bob Thornton's philosophizing assassin talked his way out of a ticket from Colin Hanks' Gus Grimly by soliloquizing about the devil. But despite the surface similarities, Malvo and Milligan are very different creatures. While Malvo was a brooding, malevolent man whose first response was typically violence, Milligan possess a rather chipper exterior — even if that exterior masks a menacing interior — and one gets the sense that he only resorts to violence as a last resort. At least, no one he interacted with in this episode ended up dead!

I'm also very interested to see what the show has in store for the Kitchen brothers. Their identical features, complimentary trench coats, and matching hats are a unique presence on the show. They sort of remind me of Peter Stormare's gruff Gaear Grimsrud in the original 1996 Coen Bros. movie — except even more taciturn, and there's two of them. We have yet to see Gale and Wayne do anything other than stand around and look ridiculously cool, but surely the show won't keep them on the sidelines for long. According to the law of Chekhov's Twins, you don't put a pair of imposing identical twins onscreen unless those twins are about to do something exciting. (That's what Chekhov said, right? Close enough.)

Sadly, the viewers shouldn't get too attached to the Kitchen brothers or their cohort Mike Milligan. Not only will we not be seeing them after Season 2, Fargo being an anthology series and all, but given that the whole season is building up to the infamous Sioux Falls Massacre mentioned in Season 1 that an older Lou Solverson, we'll probably watch them meet a grisly death before the end.