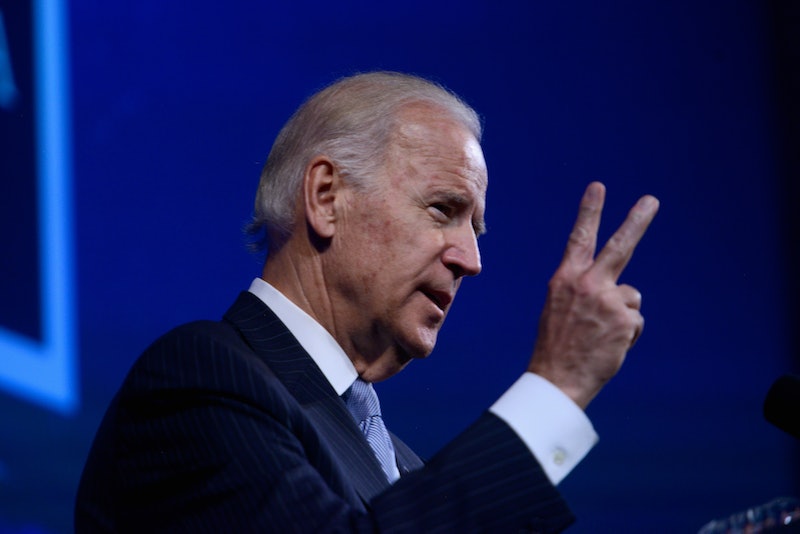 Fox News reported Monday afternoon that Vice President Joe Biden was preparing to announce his candidacy for president of the United States, according to sources close to Biden. But other sources, like ABC News and MSNBC, say that Biden will announce his decision, which could be against a campaign, in the next 48 hours. Analysts have mixed opinions about whether Biden would succeed in a campaign against former Secretary of State Hillary Clinton, but he would certainly prove to be strong competition for her, which is more than he could say in his last campaigns. What happened during Biden's last two presidential campaigns? Alleged plagiarism and controversial comments contributed to him dropping out of the presidential races in 1988 and 2008.

A Biden campaign could pose the most significant threat to Clinton grabbing the Democratic nomination. ABC News evaluated recent polls concerning voter approval of the two politicians and found that voters believed Biden to be more honest and trustworthy. They also believed that Biden cares more about their problems and that he would be just as strong a leader as Clinton would be, according to ABC News. But Clinton is still performing higher in the polls, and her strong debate performance has only helped those numbers (though not by too much).

It's important to note, though, that Biden's polling well when he hasn't even started a campaign. That means that voters don't have a platform to reject or support, but it also means that Biden hasn't been given the chance to say something that could hurt his poll numbers or his chance at the nomination. Unfortunately, his last two presidential campaigns ended because of gaffes and mistakes that were pretty irreparable.

During his presidential campaign for the 1988 election, according to Slate, Biden was apparently inspired by a speech British Labor Party leader Neil Kinnock delivered when he ran unsuccessfully against then-Prime Minister Margaret Thatcher. Kinnock described his rise from a humble upbringing, and Biden, who was the son of a car salesman, identified with his story. Biden adapted the speech to use in his own campaign, Slate reported, and would often credit Kinnock. Eventually, though, according to The New York Times, Biden stopped crediting him even though he was using large parts of Kinnock's story as his own. Once such use of Kinnock's words was recorded at the Iowa State Fair in 1987 and then investigated by Maureen Dowd of The New York Times. Biden repeatedly denied that he had done anything wrong.

When he did come clean, other instances of plagiarism were revealed. Press investigating his speeches found that he had also lifted portions of speeches delivered by Robert Kennedy and Hubert Humphrey, according to Slate. The day after those revelations were printed, Biden admitted that he had received an F during a course in law school because he had plagiarized five pages from a published article in one of his term papers, The New York Times reported. When voters questioned him at campaign rallies, he snapped at them. "I think I probably have a much higher IQ than you do, I suspect," Biden said to one voter, according to the Los Angeles Times. Biden withdrew from the race in September 1987.

Unfortunately, Biden's 2008 race was also marred, this time by inappropriate comments. Early in his campaign, he was forced to apologize to then-Illinois Sen. Barack Obama after he described Obama as "the first mainstream African-American who is articulate and bright and clean and a nice-looking guy," The New York Times reported. When he tried to apologize for the comment, he said he should've used the word "fresh" instead of "clean," according to CNN. Later, during a speech in New Hampshire, Biden said "You cannot go to a 7-Eleven or a Dunkin' Donuts unless you have a slight Indian accent," CBS News reported. Biden dropped out of that race when he finished in fifth place in the Iowa caucus in 2008.

These kinds of gaffes and inappropriate remarks are what could keep Biden from maintaining the support he has managed to gather despite not even being in the race. Biden hasn't had to speak on issues such as the Black Lives Matter movement or women's reproductive rights. His past campaigns, though long ago, show that he should tread carefully should he decide to launch a campaign.