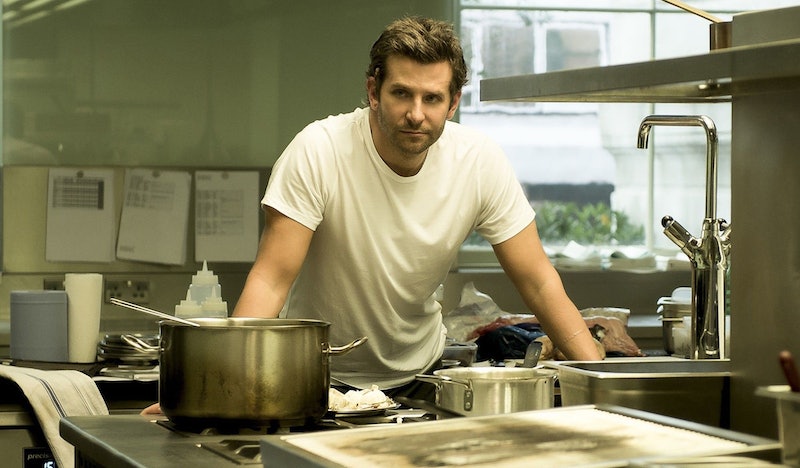 Michelin-starred kitchens are no place for the weak or the weak-willed, as the new Bradley Cooper drama Burnt aims to prove. In the film, out Oct. 23, Cooper plays a troubled chef who rose to prominence too quickly and lost his standing in the foodie world in a haze of drugs and bad behavior. Burnt is a redemption story about an artist reclaiming his craft and a takedown of the celebrity chef culture that strokes the egos of the rock stars of the moment. Adam, Cooper's character in Burnt, isn't based on a specific chef, and Burnt is an original story. But Bradley Cooper did find some of his performance in his interactions with three famous chefs: Marcus Wareing, Marco Pierre White, and Gordon Ramsay.

He told Yahoo Movies how spending time with those chefs manifested in the character of Adam Jones:

He's a combination. Little things he does, physical things, are basically things I stole from all three of those guys ... It wasn't conscious, but going back and watching the movie I see, "Oh yeah: That's him ... that's him ... [and] that's him."

I can only hope that any insult game Adam Jones ended up with is culled right from Gordon Ramsay himself. The Kitchen Nightmares host may softball it with those kids on MasterChef Junior, but he knows how to take a grown chef down a peg or 20 when he has to. Here are seven scathing Gordon Ramsey takedowns that I can only hope made it into Burnt.

Every movie ever could be improved by a 300% increase in puns. Food puns are even better. And mean food puns are the best. Thank you, Chef.

Some editor could have dropped this Ramsay line right into the Burnt trailer and no one would have even noticed anything was amiss.

When you burn people as much as Gordon Ramsay does, you've got to get creative with those nasty pet names. Panini head is an excellent choice, as it both implies an unimpressive intellect and reminds me of melted cheese on fresh bread. Never mad at that.

4. "The chicken is pinker than your f***ing lipstick."

To be clear: this is a bad thing.

Kind of uncool to bring a departed grandma into things, but Gordon Ramsay hasn't met a line he won't cross when he's faced with some subpar cooking.

Cloudy with a chance of hiding in the pantry.

The metaphors, you guys. It's poetry. Right at home in a Hollywood script, I should say.

Gordon Ramsay is the king of insults, and there could be no better inspiration for a bad-tempered movie chef.