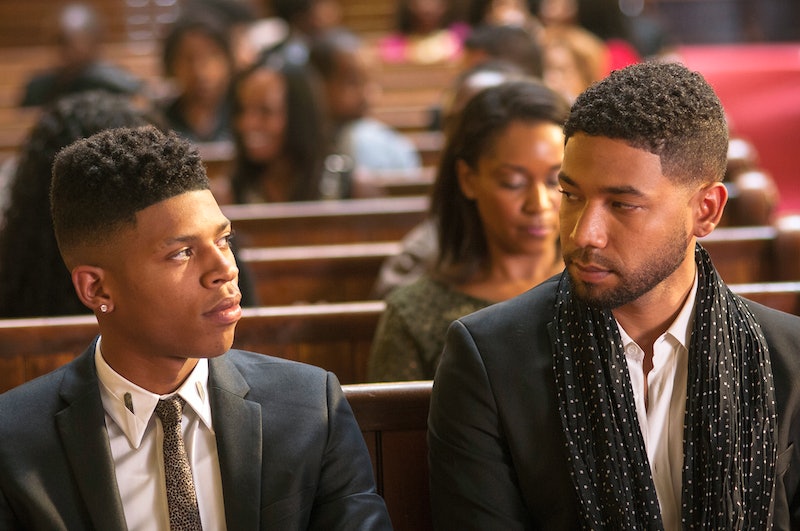 Lucious Lyon's beloved record label Empire has seen quite a few drastic changes since he went to prison and was released on bail. First, Cookie, Hakeem and Andre tried to overthrow him as head of the company, but the plan failed. Then Cookie and Hakeem started their own record label on Empire, Lyon Dynasty, which hasn't gone as smoothly as they hoped. They've already lost Andre who has now officially gone back to his father, and then they lost radio privileges. But on Empire, it's best not to count Cookie and Hakeem out. Despite their setbacks, Lyon Dynasty has already produced quite a few brilliant tracks. So who has put out the best Empire Season 2 songs so far, Lyon Dynasty or Empire?

If we were to go by numbers alone, the answer would be Empire. They have more resources to make more music, even with Jamal at the head of the company while his father was locked up, several new tracks were produced. But what Lyon Dynasty has shown so far is a little more versatility. Most of the tracks released by Empire this season have been from Jamal himself, whereas we've seen music from Hakeem, Tiana, V. Bozeman, and Hakeem's girl group over at Dynasty. Now to be fair, I've only counted the Season 2 songs that debuted after the creation of Lyon Dynasty in Episode 2, "Without A Country." So based on song quality rather than quantity, which label is in the lead?

Valentina may think she'll shine at a big record label like Empire, but that's where she's unfortunately wrong. She needed to be at a smaller label who would give her more attention time to help hone her craft and really burst out into the scene with support. This track she debuted with Sway as part of Empire is disappointing, to say the least.

"No Doubt About It," Jamal feat. Pitbull

The beat of this song might be fun, but it doesn't have much substance.

Sorry may not cut it, but this song doesn't totally cut it either. It's a good track, but it can be so much better, considering it's from the ultra-talented Jamal.

"When Love Finds U," Jamal

This is a great track, but doesn't achieve the sheer brilliance of songs like last season's "You Can Keep Your Money."

An epic song no matter how you slice it. Definitely one of Jamal's best so far.

I believe this is Jamal's best track of Season 2. The melody, the heart, and the attitude mixed with the beat makes for a brilliant combination.

I know it can be argued against, but in my opinion, this track Lucious released from prison is easily one of the best from Empire. It has anger, a fantastic beat, some humor and Petey Pablo, which is pretty awesome. Though I sometimes wish Lucious had a little more depth to his gritty voice, "Snitch B*tch" proves the Lyon boys' talents are no fluke.

We don't get to hear much of V's song, but what we do hear is good, if not especially memorable.

"Do It," Mirage a Trois (Feat. Valentina)

"Do It" sounds a lot like Fifth Harmony's "Worth It," which is probably what Hakeem is going for with his girl group. If so, he totally nailed it. I was definitely nodding my head to the song and I'm intrigued to hear how it will sound with a new lead singer.

This track reminds me of Future and Drake, which is definitely not a bad thing. It's a change of pace to Hakeem's more hard-hitting beats and definitely showcases his own talents, as well as how he works with more established artists.

"Get No Better," Tiana

Tiana has already garnered comparisons to Rihanna, for everything from her name to her fashion to her music, so it makes total sense that this track sounds like something Rihanna would sing. In fact, it has the same feel as "Watch N' Learn" from Rihanna's album Talk That Talk. While Tiana's singles at Empire were good, this somehow feels like a big step up, perhaps thanks to her getting the chance to really hit hard with a beat and let her vocals come through in a more interesting way than on something like "Keep It Movin'."

This record is ridiculously good, and the fact that it premiered on the series as Cookie and Hakeem were crashing Lucious' party only makes it better. It's a diss track at times, and a power track that shows off Hakeem's individual talent at others. Sure, his work at Empire in Season 1 was great, but if this is the kind of material we can expect from Hakeem at Lyon Dynasty, we may have found a winner.

This song can't really count for either label, since it was on Hakeem's album from Empire, which he finished after leaving for Lyon Dynasty. Plus, the brothers filmed the music video together even while on different labels. So let's call it a tie and give points to both sides for this standout track.

The final verdict? I have to give it to Lyon Dynasty, but it was a very, very close call. The new label wins because in just a few episodes, it has proven that its artists have a diverse array of talents, as well as staying power. Empire, meanwhile, has only proven that Jamal is still talented. If Lucious wants his label to come out on top at the end of Empire Season 2, he better find a way to beat Lyon Dynasty's winning combination of talent and creativity.