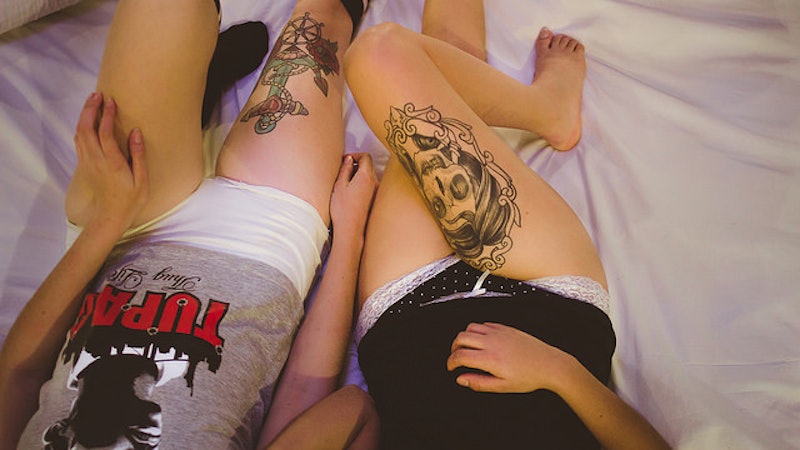 Thanks to the sexual revolution, sex hasn't just changed over the past few decades, but it continues to change. Thoughts about sexual activities that may have once led to someone being labeled “promiscuous,” are evolving in a way that people are no longer being shamed for wanting sex, having sex, and having sex with more than one person at a time. And sex on college campuses is changing dramatically, as New York realized in their week-long survey of college students and their sexual histories.

Of the 700 students polled for the "Sex on Campus" issue, New York got quite a glimpse into what it’s like to be a college student, in regards to sex, in 2015. What they found with sexual assaults on campuses on the rise, 25 percent of college women having been raped, and university administrations who don’t seem to care as much as they should, is that students aren’t just approaching sex differently, but even some are deciding against it all together. The sexual revolution of their parents or, in some cases, their grandparents, might be over, but the sexual awareness of that time has trickled down to affect the college students of today, and that's a good thing. In being sexually aware, you're not just safer in your pursuits, but you know how to handle sexual situations better.

Whether you're in college now, are headed there next year, or graduated a decade ago, here's what it’s like to be sexually active in college in 2015.

1. The Term ‘Hookup’ Has A Different Meaning For Everyone

Although this isn’t always the case, based on the survey, long-term relationships often grow out of having sex, or a series of one-night stands with the same person. It’s like you just keep hooking up for weeks or months, then suddenly you’re in a relationship. But of course, no one is a fan of labels these days, so it's not like anyone actual says they're in relationship.

3. ‘Affirmative Consent’ Is Now Part Of The Equation

With campus rapes higher than ever, some students have enacted “confirmative consent” which is meant to protect both women and men, especially if there’s been drinking. While there are those who feel that having confirmative consent can make sex “less sexy,” its supporters feel otherwise. If you continuously communicate to each other that you’re both into what you're doing every step of the way, then it’s safer for everyone.

4. People Think They’re Having Less Sex Than Their Friends

According to the survey, 40 percent of the participants are virgins. Although their reasons for being a virgin differed, both the virgins and non-virgins firmly believed that everyone around them was having more sex than them. As the survey noted: “Everyone, in other words, thinks they are the exception to a general state of wild abandon.” A statement than can one deduce that maybe there isn’t all that much sex going on in general.

Once a upon a time, society stuck to the idea that there were only two genders, male and female, and in regards to sexuality, you were gay, straight, or bisexual, but now there are so many other ways in which one can identify and explore sexuality.

You can be trans or pansexual, or aromantic or, to quote New York, “Be a demi-girl who identifies with the female binary; be a graysexual panromantic transman. Whatever best describes you.” It’s a freedom that generations before didn’t enjoy, at least not on such a level.

Although it shouldn’t be terribly surprising because meeting people when you’re in college is easy, the survey found only 20 percent of people are using dating apps. The rest of the students rely on classes, parties, or friends of friends to meet people.

7. Today’s Students Have A Better Idea Of What They Want Out Of A Hookup

The most notable aspect of the survey is just how clear headed today’s college students are compared to the generations before them. While a decade ago it would have been rare to find a student who didn’t find hookups appealing, now those students who are progressive in their thinking can openly admit to hooking up being very “problematic,” in some cases, a term that, according to New York, is a favorite in regards to this topic.

More like this
Help! My Partner Only Wants Sex Late At Night & Won’t Compromise
By Sophia Benoit
What Mercury Retrograde Spring 2022 Means For Your Sign's Sex Life
By Nina Kahn
Ask A Sex Therapist: Is My Sex Fantasy Normal?
By Madison Malone Kircher
The Most Compatible Life Path Numbers, According To Numerologists
By Kristine Fellizar
Get Even More From Bustle — Sign Up For The Newsletter