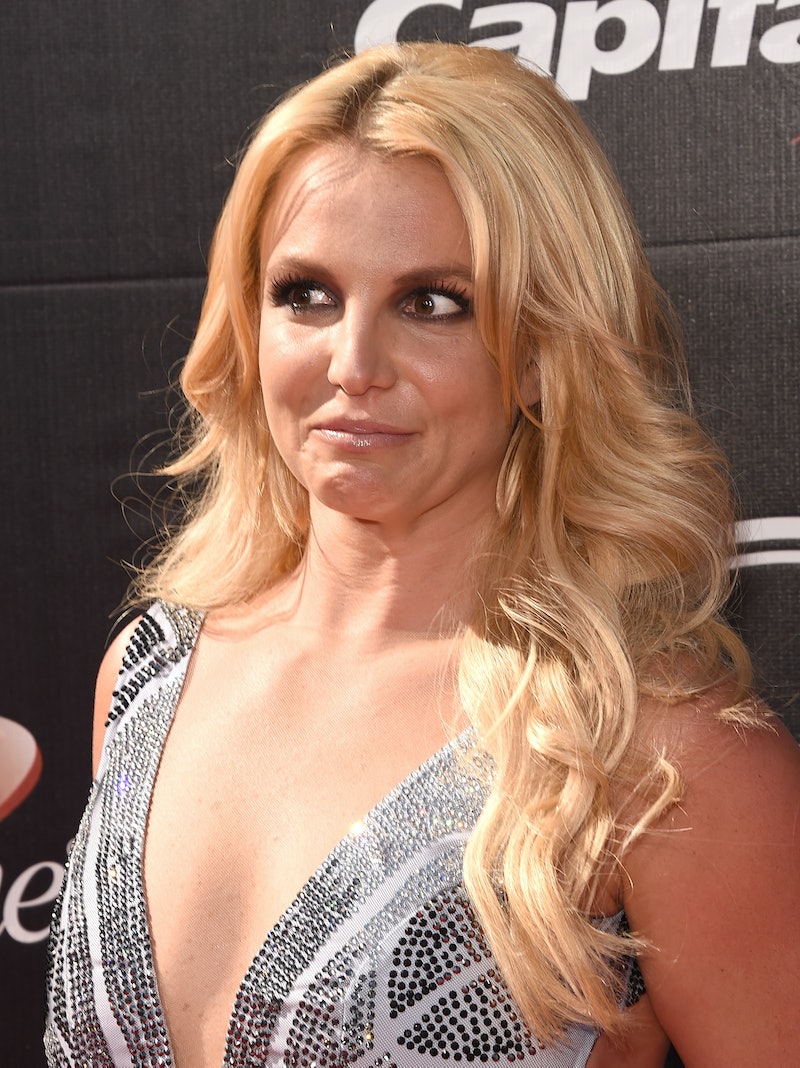 Last weekend, all zippers — er, hell — almost broke loose during Britney Spears's Piece of Me show. About a minute into Friday evening’s performance of the 2009 hit “3,” the living legend sensed that something was amiss. And indeed, the zipper on her bodysuit had begun to come undone. She could not fix it by herself. It was official: Spears had a wardrobe malfunction on her hands.

She had to make a decision, and fast. She could a) run backstage and ask someone to repair the zipper, b) ignore the malfunction and let whatever happen happen, or c) ask her backup dancers to zip it up while she continued to perform. Godney is Godney, so of course she chose option c. The show would go on, unzippable zipper be damned.

For the rest of the song, Spears’s backup dancers chased her around the stage and attempted to zip the zipper. Spoiler alert: No one could do it before "3" ended (luckily, the broken leotard only exposed her back). A fan filmed the debacle and shared the clip on the Internet.

I took some notes while I watched the video. I'll go ahead and leave them here:

1:18. UH-OH. Britney cannot zip up the costume. THE NON-DRILL IS STILL HAPPENING.

1:22. Rather than call a timeout, Spears keeps dancing. Because of course she does. Psh, like she's about to be bested by a wonky ‘stume. Especially not in the middle of her Las Vegas residency. She is a consummate professional; never forget that.

1:26. Spears motions for her backup dancers to zip up her leotard. She gives them the universal signal for "fix my costume, stat." The dancers leap into action.

1:28. Spears and one of the backup dancers stand behind some monkey bars. The one dancer attempts to fix the 'stume while the others swing on the monkey bars. Hopefully, this section of the choreo gives him enough time to fix the ‘stume.

1:33. It wasn’t enough time. The backup dancer was not able to zip it up. And now, Spears has to book it to the front of the stage. What will she do? This is so stressful.

1:34. THE BACKUP DANCER IS FOLLOWING HER EVERYWHERE. He is determined to fix that zipper. He is not about to let that costume do wrong by Britney. What a guy.

1:39. The backup dancer has to call in for reinforcements. Now two backup dancers are attempting to fix the ‘stume. Spears keeps her cool. She continues to perform as if there aren't two humans yanking on the spandex unitard she's wearing.

1:43. Spears looks back at the broken zipper sitch. She assesses the situation. She decides to keep dancing. UGH, GODNEY RULES.

1:49. I wonder if the dancers' sunglasses make it difficult to see the zipper.

1:57. Oh my god. That backup dancer spun around in a circle with Britney, all the while never letting go of the zipper. This guy is my hero. I can't stop cheering.

1:58. Wait, why did the backup dancer just leave Britney. Where'd the hero go? Did he do it? Did he fix the ‘stume?

1:59. Has the day been saved? WOW. What an exhilarating adventure we—

2:01. Welp, I spoke too soon. Yet another backup dancer has rushed to Britney’s rescue. It's official: The ‘stume is still in shambles.

2:07. Aaaaaand the backup dancer gives up on the leotard and gets back to dancing. My hope has all but evaporated. The costume is a lost cause. That zipper will never zip again.

2:23. Uh-oh. Are my eyes playing tricks on me, or did the zipper unzip some more? How low does that zipper go? Should we be nervous? Because I am nervous.

3:00. One of the backup dancers gives the zipper one last shot. Will he be the one to save the day? Is he the King Arthur to this zipper's Excalibur?

3:02. Alas, the backup dancer number did not successfully zip up the leotard before he had to hit his next mark. Hey, he tried!

3:29. Man, that zipper is dangerously low. However, the song is almost done. We're almost out of the woods. WE'RE SO CLOSE. YOU GOT THIS, BRITNEY.

3:34. Aaaaaand the song is over. She's backstage. WHEW. All is well. All things considered, that really wasn't too disastrous a wardrobe malfunction, eh? Even so, that was too much suspense for one afternoon. I need a nap.