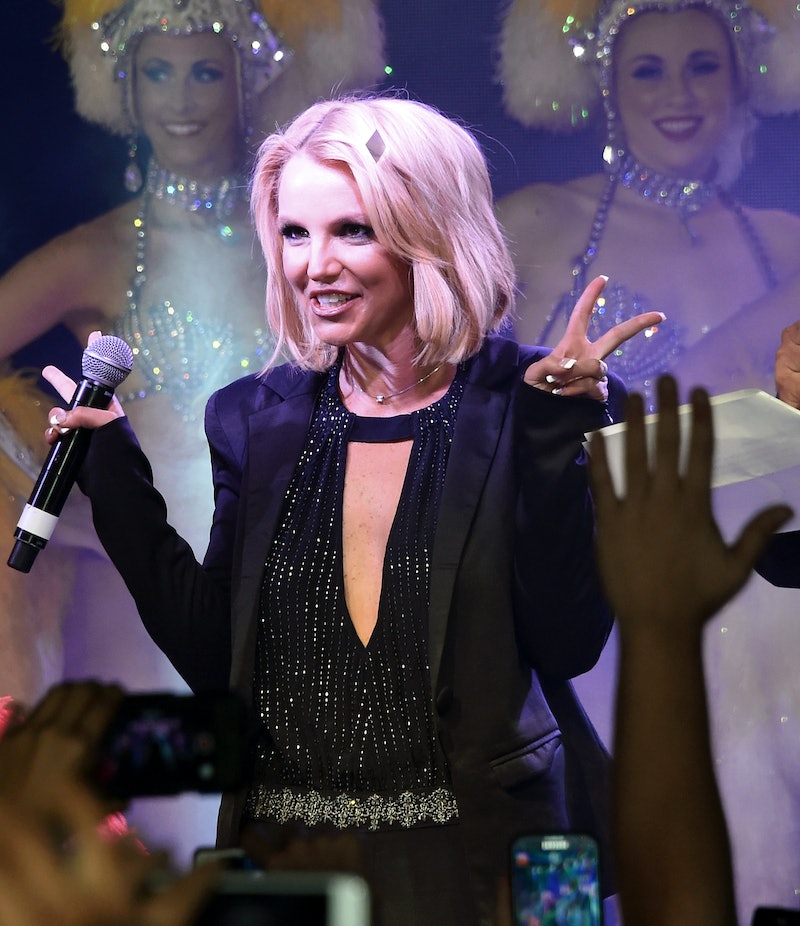 If you told my 12-year-old self that I would be spending my hard-earned real world money on Britney Spears tickets one day, I would've never believed you. I loved her as a kid, but past tween-hood, being a Britney fan felt juvenile. As I was forming my identity, it felt necessary to listen to "deeper" music — at the time, that meant anything but contemporary pop. And so began a long period where I was vociferously anti-Britney. That lasted until Circus, which I couldn't pretend to be cynical about — it was great. But up until then, I scoffed at her for lip syncing, failing to write her own songs, and not being a real artist.

Fast forward to last week, when I saw Britney Spears' Las Vegas show, Piece of Me. Britney and her dancers put on a two-and-a-half hour athletic display, full of lifts, pyrotechnics, and glorious and awe-inspiring gaudiness. (At one point, Britney donned a pair of LED-light angel wings.) I found myself in a stage-side pit surrounded by a crowd of Spears fanatics singing along to every trill, every moan, every sexy-talk interlude of Britney's greatest hits. With a ludicrously-priced souvenir cup in my hand filled with a ludicrously priced (yet strong) gin and tonic, I sang every trill, every moan, every sexy-talk interlude alongside them. Because, when in Rome, one does as the Romans do, right?

It was nothing short of a revelation. Sure, she was lip syncing. Sure, her dancers did a lot of the heavy lifting. But as far as nostalgia dance parties go, this one was unbeatable. Here are all the reasons that seeing Spears' Vegas show is the greatest thing for any childhood fan of Brit Brit.

She Played The Throwback Hits

As you would hope, Britney didn't leave the stage without some '80s rock guitar versions of "Oops... I Did It Again," "Baby One More Time," and "(You Drive Me) Crazy." As she geared up for these numbers, the crowd roared like a thousand waterfalls. Then began the collective sing-along.

It seemed like every person in attendance knew every word to every song, even past the old standards. I'm not as devout of a Britney fan as many other folks are, but being there and singing along in the collective din of voices makes you feel a reflexive kinship with everyone around you. Even the guy wearing the mohawk with Britney's picture airbrushed onto the side of it.

It Was A YOLO Moment

Part of the reason that I made the happy mistake of purchasing stage seats is because I'm a Ticketmaster novice. That said, I mistook "best available" to mean "the only ones available" when purchasing my seats, and justified the astronomical price because this was a YOLO event if one ever occurred. Only later did I realize that I had accidentally purchased front row seats, which sent me into a financial panic, because I usually don't spend that kind of money. However, having been there and back, I can say that it was worth it.

We Were All There For The "It's Britney, Bitch" Era

"Bitch" has been appropriated and reclaimed in many ways. Plenty of people would call it Jesse Pinkman's catchphrase, but nobody works it better than Britney. From "It's Britney, bitch," to "Work, Bitch," it's become a piece of insider lingo for Spears fans. Case in point, the show started with a Don Pardo-voiced announcer telling the crowd to "Enjoy Britney, Bitch." Hilarious.

It Solidified Britney's Status As A Real Artist

This is where I revisit the argument of Britney not being mass-produced pop star rather than a legitimate artist. It's no secret that Britney lip syncs, uses song writers, and doesn't really dance like she used to. Even if she doesn't create the music per se, she's the mouthpiece — the interpreter, the symbol, and someone who exercises her creative control to put on a mesmerizing show.

It Was A Testament To The Power Of Nostalgia

It's astonishing how classic music makes you think only of the good times. The Britney concert was that times a million. Listening to her collection of hits — from "Baby One More Time," to "Gimme More," to "Til The World Ends" — all brought back memories of fun. Driving around after high school in my friend's car. Having late night dance parties in basements. When Britney was on the radio — from my childhood, to my Britney ambivalent years — everyone sang along and forgot their troubles momentarily. Hearing those songs pop up on the radio brings it all back. Hearing them all at once is almost euphoric. It's easy to be overwhelmed by the inevitability of aging, and the dread of not being able to stop or turn back time. This concert gave me a chance to pause things, and make a memory by looking back.