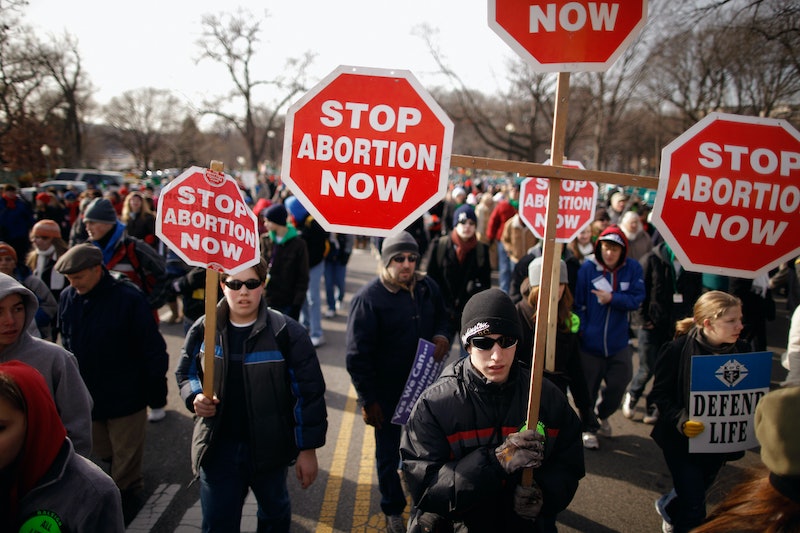 In other words: Far from abortion being "out of control," as some pro-life activists claim, control of abortion is at an all-time high since Roe v. Wade became statute in 1973.

Our examination of the statistics from the Guttmacher Institute suggests states took a four-pronged approach to curtailing abortion provision between 2011 and 2013. These include targeted restrictions on abortion providers; limitations on insurance coverage of abortion; bans on abortions at 20 weeks post-fertilization (the equivalent of 22 weeks after a woman’s last menstrual period); and limitations on medication-induced abortion.

What's more, four states in particular enacted the majority of the restrictions — North Dakota, Texas, Arkansas and North Carolina — with North Dakota and Texas enacting 13 of them in 2013 alone. Neither of those two had legislative sessions in 2012, meaning some restrictions were carried over from 2011.

Particularly significant was the bill passed in the House of Representatives that countered Roe v. Wade by securing a lower limit to the time at which an abortion might occur. The Pain-Capable Unborn Child Protection Act reduced the abortion time limit from 24 to 20 weeks.

That it was based on contested scientific evidence on fetal pain did not seem to trouble the (notably, all male) GOP lawmakers who went ahead and sanctioned it, even rejecting exceptions for rape, incest and well-being of the mother. And while President Obama assured everybody that he'd throw it out if it reached his desk, Nebraska's governor went ahead and signed it into law anyway.

Meanwhile, Arkansas and North Dakota enacted laws banning abortion even earlier on. For Arkansas, that was an abortion ban at more than 12 weeks since a woman's period, and in North Dakota, after a fetal heartbeat is detected. (That can be as early as six weeks.)

For the time being, enforcement of these restrictions is on hold while legal challenges are mounted. Yet eight more states joined Arkansas and North Dakota in making it even more difficult for local hospitals to provide abortionS in the first place, including Alabama, Wisconsin, and Ohio.

Oh, and then there was the introduction of enforced 72-hour waiting periods (South Dakota), enforced counseling (Ohio and Kansas), and straight-up subjective refusal to provide the service (North Carolina) to contend with. California was alone in enacting legislation to increase abortion provision, by increasing the accessibility of clinics able to legally perform procedures.

But as the Center for Disease Control and Prevention, which publishes an annual abortion surveillance report, has shown, the most effective way of lowering abortion rates is to increase contraception provision.

Which might make the outrage from religious organizations who claim they should be exempt from providing contraception somewhat, um, counter-productive.