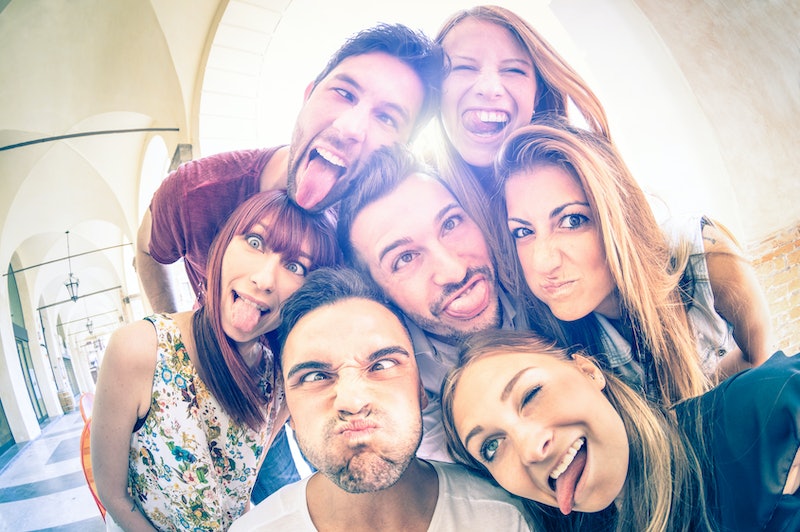 Have you been struggling to achieve your #SquadGoals lately? Thankfully, we now have an app named Squad, launching today. Squad is a free iOS app that has the swipe-right interface to which we have all become accustomed in dating apps, but it is meant to connect groups of friends rather than two strangers for explicitly romantic purposes. And since Squad focuses on developing organic connections similar to when groups of friends meet at a party, bar, etc., there is a chance that you will find your next partner during one of these squad hangs. The group dynamic and low-key vibes remove the awkward pressure that exists when meeting people off of dating apps for the first time, which can often lead to first dates feeling more like job interviews than blossoming romances. Adam Liebman, founder and CEO of Squad wanted to provide a middle ground by removing the friend versus romantic implications.

Once you've downloaded the app, you can create a "squad" through Facebook or by inviting friends to the app with Squad's text messaging feature. You can give your squad a cool group name and create a profile for each individual squad member (the basic social media stuff: first name, photo, job, age, school network). After your squad has come to fruition, the app will allow you to see other squads in your vicinity and their plans for that day/night, and you can swipe yes or no. If your squad matches with another squad, the app will open a chat for you to connect and share info to hang out.

Liebman spoke with Bustle about why we need an app like Squad, and why it has taken so long for this kind of app to be released while there is seemingly a new romantic or hookup app each week. Liebman says that the development of relationship apps can be divided into three chapters. He describes the first chapter:

"Using apps to meet people explicitly for romance, when you think about 10 years ago, that was kind of crazy." Weren't you probably embarrassed to admit that you used an app or site to date because of the weird looks you would get from your friends? Liebman continues, "But now, thanks to Tinder, Bumble, Happn, and Hinge, and all these apps, it's become incredibly mainstream. Using apps to connect with people in a romantic sense is a totally acceptable thing," which is the second chapter. "The third chapter is to connect with people explicitly for friendships and platonic relationships." Liebman explains that he doesn't think we have totally made it there yet as a culture; people will probably still think it's weird, rather than fun, effective, or convenient, to make friends off of an app, but he hopes that Squad will lead the new way.

Liebman explains that while, thanks to all of the apps available to us, it should technically be easier to meet somebody new than ever before, the sheer volume of the people that we could potentially meet is a little overwhelming. Squad presents a less intimidating and more true to real life way to experience all of the people around us. Also, thanks to our frequent phone habits, Liebman expresses that having a one-on-one, face to face conversation can feel a bit awkward sometimes. He says, "It's ironic that this would be an app on your phone that gets you talking to people, but I think this will work."

1. It's Different From Meetup

If you are familiar with websites like Meetup, then Squad may not seem that brand new to you. However, Squad is addressing the issues that some people deal with when using the site for finding friends. Liebman told us, "We still don't necessarily feel comfortable in a Meetup environment because although it is a group of people who are supposed to share a common interest, it's still you going as an individual into a group of many." The difference between Squad and Meetup is one group of three friends meeting another group of three friends versus 17 strangers all having to get to know each other. The group dynamic automatically creates a sense of comfort and familiarity in what could be an intimidating scenario.

Additional problems, as Liebman explains, are that Meetups don't necessarily connect strangers who have enough in common to forge a real connection: "The problem with Meetups, and this might sound counter-intuitive, is it's geared around interests that sometimes don't mean that you have anything in common with the other person." Liebman uses the example of a biking club in which everyone loves biking but for very different reasons (exercise, environmentalism, saving transportation money) "and you'll end up in the same place as someone else but that doesn't mean you have anything in common."

2. You Can Use A Creative Tagline So People Know What You're Looking For

Each profile has a space for a creative tagline that sums up the group's reasons for using the app. The tagline allows for specifics, which will hopefully rid the situation of any potential awkwardness as all parties will know exactly why they have met up. No need for awkward silences while trying to figure out what to do.

Examples of taglines include, "Squad of two couples who all went to Boston College and are looking for Eagles fans to watch the game with." A tagline can also be more vague, and simply explain that they are a group of friends hitting up some bars and want more people to come along.

Through Squad, Liebman hopes to also challenge a common frustration experienced in the world of dating apps and online dating. Says Liebman, "When you look at the landscape out there and the other apps trying to connect people, there's a lot of inaction. There's not a lot of conversations being had relative to the number of matches." How many times have you matched with someone on Tinder only to never speak to each other? Squad attempts to remedy this by limiting the amount of time that you have to communicate with your matches to 24 hours. After 24 hours passes, they will disappear from your matches. Liebman continues, "We want people to take action and know that 'hey, I gotta say something [before time runs out].' And if they don't respond, that fear of rejection goes away because they're not even gonna be there in 24 hours."

This also challenges the concept of pluralistic ignorance, explains Liebman, which refers to the false assumptions that prevent two interested people from getting to know each other. Pluralistic ignorance is what happens when, for example, one woman really wants to approach someone else, but refrains because she figures he or she isn't interested. At that same moment, that person wants to approach her, but refrains for the same reasons. Now, says Liebman, "neither of us are saying anything to each other even though both of us would be so down for a conversation." Squad establishes this 24-window to make this first move less intimidating.

4. The App Lets You Change Your "Squad" Whenever You Use It, Like A Normal Outing With Friends

In order to mirror the spontaneity that occurs during an IRL meeting between groups of friends, the app requires you to select your "squad" each time that you open it so that your answer can be different depending on the day. Similarly, you aren't always hanging out with six friends, and you aren't always hanging out with the same people. Liebman says, "Your squad is probably changing depending on when you are going out. We want people to get on Squad when they are already going out." This allows for an organic, "in the moment" type of setup in which users can act on specific, real time goals.